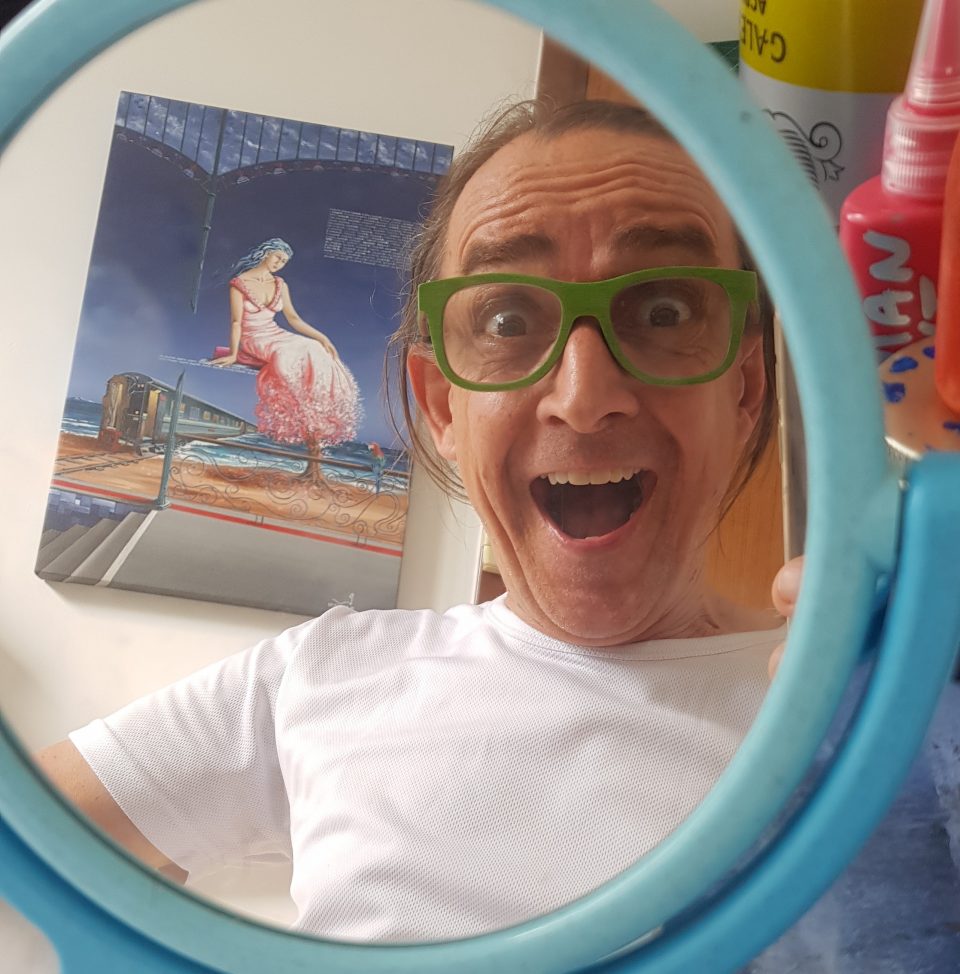 Belgian surrealist painter Olivier Lamboray has lived in Bali for about 20 years.

Appreciated worldwide for his highly recognisable work that’s been exhibited everywhere, he acknowledges that contrary to many foreign painters having settled in Bali, he has absolutely no fascination for either Bali or Indonesia. Except for one thing that is now his trademark: the colour blue.

Forget Walter Spies, Adrien-Jean Le Mayeur, or Antonio Blanco. With Olivier Lamboray, there is not much of Bali on the canvas. “Indonesia; it’s not me. And Hinduism, well… it’s far too complicated,” said the 51-year-old citizen of Waterloo. No, what matters to him in the Indonesian archipelago is the colour up above.

“The one and only thing I’ve got from living here is the colour of the sky. I’ve been working on the colour blue for many years and yes, it’s now in every single painting I do,” he explained with a characteristic, unhurried, and level voice.

Olivier Lamboray is a very articulate person, maybe because of his maths and physics background, in solid contrast to the usual cliché of the wandering Western painter lost on some exotic tropical island. Well, not exactly – he did that too. He lived like a cast-away for six years in the Andaman Sea, alone on a secluded islet where he painted but also had to fish every day for survival.

Originating from a wealthy family of the Belgian bourgeoisie, Olivier Lamboray’s life has been a long search for how to break the scientific lineage with his physician father. Also, it’s about how to reconnect with him once he had encountered some success in his trade and proved to his father that art could also be a serious matter worthy of interest.

Olivier Lamboray says about himself that he is a typical Belgian surrealist painter and refers to Rene Magritte or Paul Delvaux as his major influences. “Surrealism is a Belgian thing,” according to him and it indeed has little to do with tropical languor and warm Gauguin style.

He likes to paint trains, cars, and buildings in surrealistic settings. But he also likes to paint his ex-Balinese wife in many pieces he made for years. This was likely his second major local influence, after the colour blue, concedes this father of one.

In his previous work, some Balinese elements appeared in several of his paintings, but it is completely over at present, as is his marriage. “Now, I paint some Belgian,” he said, reminding us how deeply rooted into Belgian culture surrealism is.

The composition of “his” blue is a secret he will not reveal and it is probably his most significant signature. It’s perhaps what makes a painting a Lamboray nowadays. Not to forget an obsession with disappearing buildings and lately empty clockworks, his latest recurrent painting fixation, like a reflection on the “space-time continuum and the illusion of reality,” he asserted. 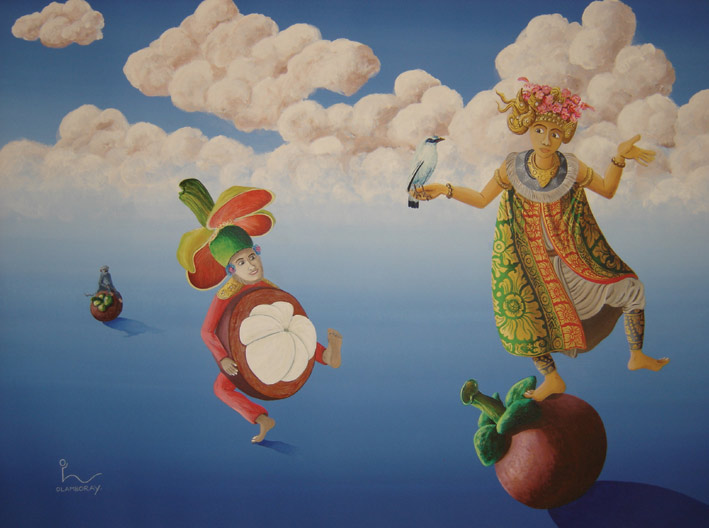 Perfectly reconciled with his father now, the artist has had a long and fructuous career to prove his talent and value worldwide and bring his canvases almost everywhere. He’s had many successful exhibitions in Belgium, the USA, Monaco, Italy, England, France, Thailand, Netherlands, Indonesia, and Guinea. He’s represented in catalogues like Mahlstedt Gallery in New York; International Art Fairs by ArtMagna Federation in Germany, Luxembourg, and Belgium; Velvenoir in Austria; Saatchi Gallery of London; and Le Troisieme Acte in Brussels.

He has received many awards and grand prizes at Gemlucart in Monaco, RankArt, Artempo, and Cotation Drouot in France, as well as Kunzfetti Competition in the Netherlands, to name a few. When asked about how many paintings he has produced in his life, he’s not sure of the number, “maybe 300 or 400,” he said.

But when asked about why he became a painter, the answer sparks fast and clear: it’s psychoanalysis. “From one canvas to another, I dig a little bit deeper,” he confessed. “My ex-Balinese wife was at the centre of my work. I’m a romantic person. But now, I’m ready for the next step,” he rapidly added.

Olivier Lamboray seems to be obsessed with the idea of time, hence his latest compulsion with clocks. “Time is important. Impermanence, evaporation, and dissipation are important concepts to me. Now that I am into clocks, I intend to symbolise the idea of a vortex, the idea of teleportation – all my clocks are empty. They bring you through a space-time continuum,” he explained with excitement. 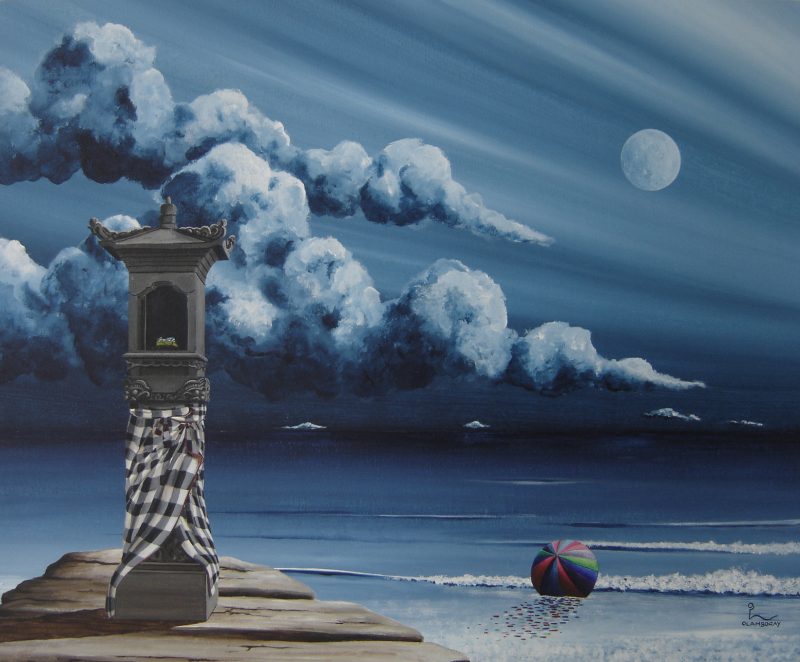 He built his career without much personal strategy and has had little contact with agents, except for one in France. For him, everything came together step by step, “one thing leading to another,” he mentioned several times how fast his name grew over the last couple of years and being invited everywhere to receive prizes and awards.

He is already featured on Art Price, the world leader of art market information. This year, Olivier Lamboray will be exhibiting his latest masterpieces in places as diverse as Manoir Pirenne (Belgium), Toowoomba Grammar Art Show (Australia), Bremerhaven (Germany), and next year in Brussels (Belgium) and Amsterdam (The Netherlands).

“I have nothing more to learn from Indonesia now. When my daughter reaches adulthood, I’ll be ready for new endeavours and probably move somewhere. For sure, I’ll discover a new culture for myself, but not for my art. It’s my personal quest. My artwork represents something big for my fellow countrymen: the Belgians. My paintings mirror our culture and education,” he concluded in his simple house, located in a housing complex in the outskirts of Denpasar. 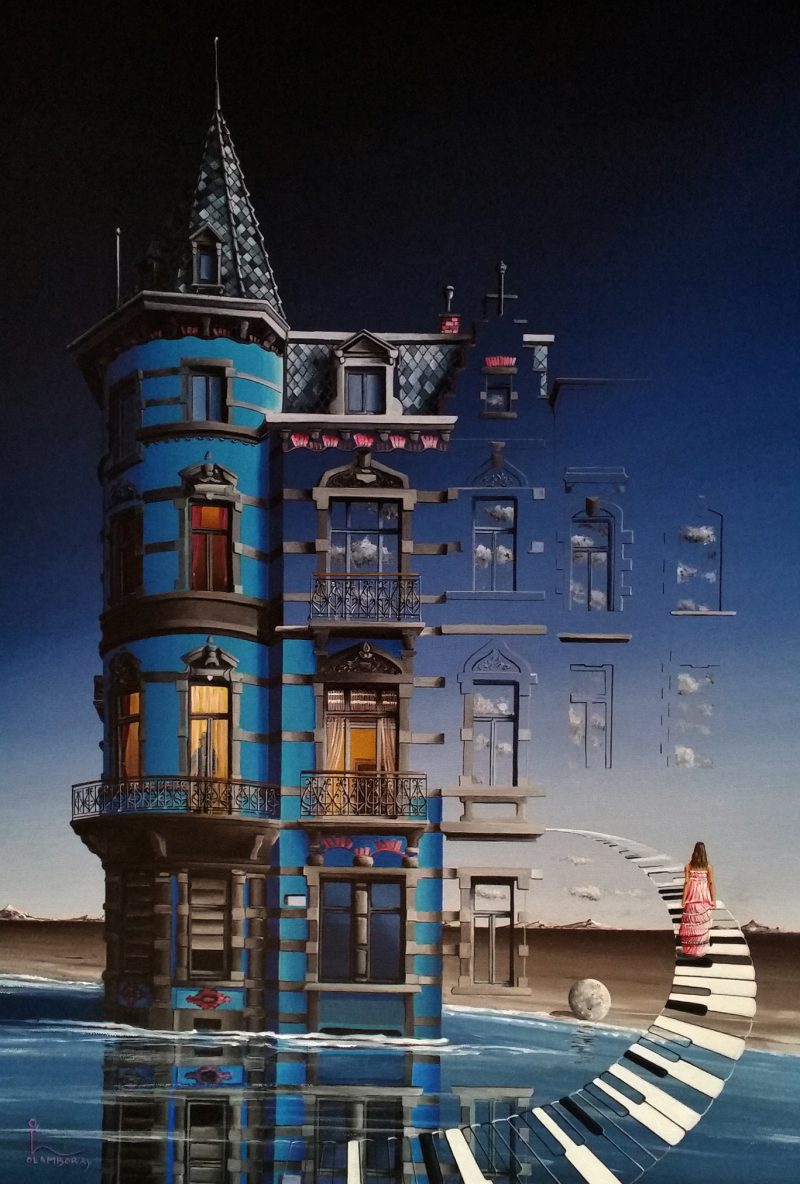