In this 21st century, Bali is rarely referred to as a paradise. Aldous Huxley in the mid-20th century wrote a book entitled ‘The Island’ in which he describes a utopian paradise of communities on a beautiful island paradise. He was writing about Bali. Despite centuries of trading, associations with foreigners and colonization by the Dutch, Bali remained basically the same. Until the mid-eighties Bali was still an island paradise, far removed from the polluted, modern ways of the West. Foreigners, even after living here for decades, lived in the prevailing culture and respected the nature of the land and its people.

When a certain group of travellers and surfers came in the seventies and eighties, they came here to live a simple life. Bamboo huts on the beach with sand floors were considered a luxury because of the simplicity and one’s proximity to nature. The lack of electricity made Bali all the more magical. A dinner party was a dozen people gathering to share a meal. Torches were lit and music was possible with batteries in a cassette player with speakers. Larger parties meant getting a car battery for sounds. Some restaurants like Blue Ocean and Made’s had electricity and served jaffles, juices and other western cuisine. Enough to please the palate. But it obviously wasn’t enough.

The dirty old Dutch kerosene lamps gave way to ‘clean’ electricity. Everyone had to have it and there went the magic. With electricity one could see at night; not the stars but what else was coveted. A refrigerator, a real oven, hot water and why not a TV? Bring one for Wayan, too. The first TV shows here were the Flintstones and the A-Team, which was followed by a rash of burglaries; a few where the victims were tied up. Where to put all these items dragged here by happy travellers? In a home of your own where curious natives could be locked out. The subject of ownership arose. People from other lands started looking around and coveting what they couldn’t buy. So they settled for long leases. It was theirs and they had paid for it. They began demanding options to extend because now they were invested. And all good foreigners know an investment has to grow and yields a profit. It’s only natural, it’s only fair. All the work for one’s own comfort must have gross profit written in somehow. 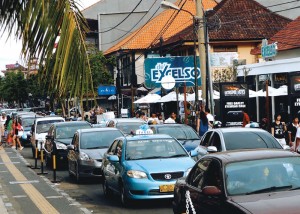 People started coveting what belonged to Bali in order to have the comforts they took for granted back home right here in paradise. Of course that meant the beast consumerism would follow, and it has. The beast grew…dirt roads were paved in black. Streets were lit up and goods displayed at all hours. Now people could do business into the night and then go out at all hours to 66 and Gado Gado. Some of those same old travellers are now still in business in order to maintain the lifestyle and comforts they deserved.

Food was a big thing. How long can you go without a big juicy steak and some fries? It was fabulous when 66 put in an Italian restaurant and then a string of lovely little cafes sprung up on Rum Jungle road; Thai food, a great French restaurant, a Natural Café. Made’s Warung was just not enough and restaurants are profit. On visa runs to Singapore, these lovers of Bali would hit McDonalds. When McDonalds arrived in Bali there were some grumblings but also a lot of customers. With the easy to use highways that run sporadically throughout the island, now come the fast food venues. Starbucks, Burger King, Dunkin’ Donuts are all here to stay. The Balinese did not request them. They did not bless them. Rather the gluttony, the misplaced desires of the foreigners created a market for these corporate food vendors. Indonesians saw them as a symbol of prosperity, cool venues of western taste. On an island where obesity was rarely, if ever seen, now chubby kids and adults are not an uncommon sight. On an island where once there was little malnutrition, now it is a big problem.

When people who now live in the suburban areas all over Bali complain about the excessive traffic and the filthy beaches full of plastic, perhaps they should take a moment out of their day and look within. Why did you come here? Did you come here to experience the magic of Bali? If so, what are you doing sequestered in a villa, alone in your pool, one of over a thousand in Canggu alone. This was the island where one never saw hunger. Where happy Balinese taught us daily what was important in life. This is where we learned to be so satisfied with so little. There is little satisfaction in the eyes of new arrivals when they land in Bali. Tourists express disappointment. They do not understand why the Balinese would allow such rabid growth.

The Balinese had little to do with it. The rice farmer did not understand compounded interest when he borrowed against his land. He wanted his children to go to school, maybe a new motorbike. But not this. The lucky ones got rich, for a while. Now you can still have a pembantu for about the same you paid thirty years ago… a little over a hundred dollars a month. About the same as a westerner spends at the supermarket in one visit. Food prices have gone up for the locals. Indonesians spend 40% of their income on food. That’s basic food. That is food for thought. Think about how you live and who benefits. It is not the Balinese.