From a review of The Age of Empathy: Nature’s Lessons for a Kinder Society by Frans De Waal

Indonesia is often cited by those governments and businessmen wishing to garner the country’s resources as being a fine example of a vibrant democracy.

The term ‘democracy’ comes from the Greek language (??????????) and means “rule by the (simple) people” or as Abraham Lincoln put it, “Government of the people, by the people, for the people.”

Most of us here would agree that the form of government adopted in Indonesia is merely a procedural democracy. Those nominated have to be members of political parties and to have an assumed piety. Few bother to listen to their electors who are not expected, or wanted, to contribute to government and can seemingly be bought off every four or five years with unrealistic promises, minimal cash handouts and T-shirts to attend free dangdut concerts.

Many, if not all, of Indonesia’s rulers are a self-perpetuating élite, vestiges of the Suharto era, which awards itself lucrative contracts in order to first pay off debts accrued through the electoral process and to then further enrich their lives.

Nor can the electorate expect to benefit from any legal certainty. Laws are flouted with seeming impunity by those who are tasked with making the laws while for those at the bottom of the social ladder there are few transparent ways of seeking regress for the wrongs committed against them.

It seems that the only way for the voices of the rakyat to be heard is through the social media, yet this has had both positive and negative consequences.

In 2010, the Welfare Minister, Salim Segaf Aljufrie, was photographed by a commuter stuck in a traffic jam while he merrily sped down a TransJakarta Busway lane. Following a tweeted meme he was forced to apologise.

In 2011, a rumour that an ojek driver in Ambon, who’d been killed in a road accident, had been tortured to death by the police, left three dead following two days of rioting. 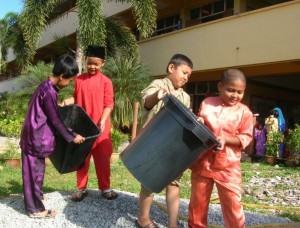 An alternative is to rely on NGOs and trade unions to lobby the lawmakers and officials. However the NGOs are also facing difficulties in that the much criticized Home Affairs Ministry is seeking to replace or revise the 1985 Mass Organization Law so they “can make decisive efforts concerning civil society organizations without having to worry about legal issues.”

That’s an alarming statement and without a say in the wider issues that affect us, it is small wonder that we are seeing an increasingly fragmented society, one in which individuals strive to meet their own needs and appear to have lost empathy with anyone not in their immediate social or religious circle.

What is sorely needed is a system of people empowerment, one in which individuals can express their concerns and by being part of the process can affect the changes that would not only address the needs of the individual but those of the community he/she is part of. In short, there is an urgent need to return to the good old-fashioned values which encourage respect, courtesy and mutual co-operation.

The principle of gotong royong has long been a factor of Indonesian (and Malaysian) life. It is a Javanese term meaning ‘mutual co-operation’ or ‘volunteerism’. It was long a factor of village life when folk would come together to build irrigation ditches, to harvest crops and build communal facilities.

When Sukarno came to power and outlined his Pancasila (Five Pillars) philosophy he argued that the Five Pillars could actually be pressed into Three Pillars (Tri Sila) consisting of the belief in the Supreme Being, socio-nationalism and socio-democracy which could be compressed into only One Pillar (Eka Sila), namely gotong-royong.

President Suharto adopted Pancasila as a diktat through which he incorporated the mysticism of Javanese culture, with its obeisance to and respect of rulers, into a centralized government with a bureaucracy and military presence which filtered down to street level. This system remains: from the Presidential Palace, to governor, to mayor or regent, to kelurahan (village administrative unit), to rukun warga (RW – citizen’s association), and finally to the rukun tetangga (RT – neighbourhood association) – and you. 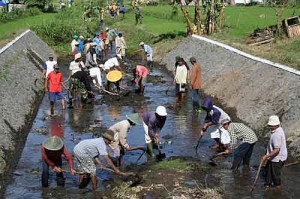 In 1969, Suharto’s ‘technocrats’ presented a Five Year Plan which lead to the ‘green revolution’ with the professed aim of achieving self-sufficiency in rice, the staple food. Although this succeeded for a while through rural industrialisation, it displaced farmers and their families, many through the transmigration program. The localised knowledge, handed down through generations of mutual co-operation, of how to get the best out of their land is lost.

Another result has been the continuing drift in search of a livelihood to urban areas where there are few leaders worthy of respect. Politicians at all levels are complacent with little regard for their electors, civil servants are arrogant, and the rakyat (citizenry) has become cynical.

But, there is hope in Jakarta, and it is offered by newly elected Jakarta Governor Joko ‘Jokowi’ Widodo and Deputy Governor Basuki ‘Ahok’ Tjahaja Purnama.

Ahok has said that to better understand the problems and aspirations of the people, civil servants must get into the streets. He also announced that due to “the lackluster performance of local leaders” during the first 100 days of Jokowi’s administration, any civil servant employed by the administration can now apply to become a district or sub-district head.

“We will evaluate their performance and ask them to pitch programs for their residents to see whether they are a good fit for the position or not.”

I hope that they will also be good motivators, encouraging, as Jokowi has said, the spirit of the well-regarded Ali Sadikin, the Jakarta Governor from 1966 to 1977, an advocate of gotong royong.

The public need educating, perhaps through compulsory community service, that courtesy – for example, queuing, road discipline, and not littering – can pay immense dividends in enhancing our daily lives.