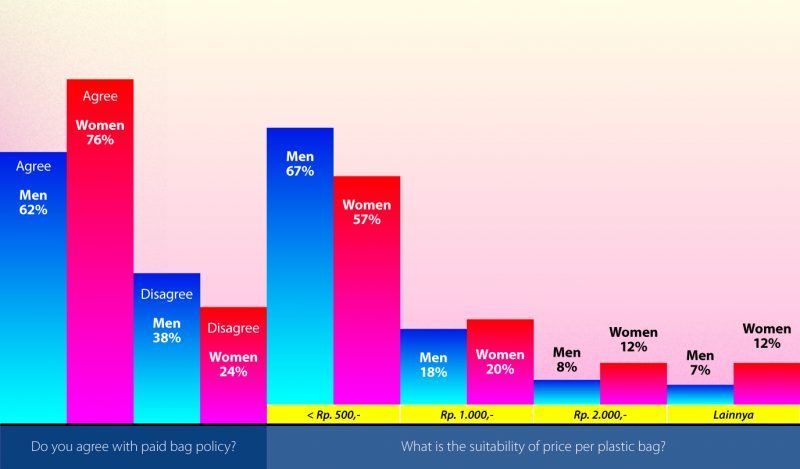 In a bid to reduce the production of plastic waste, as many as 22 cities in Indonesia have simultaneously witnessed the implementation of a paid plastic bags policy, introduced by the Ministry of Environment and Forestry (KLHK), effective from February 21. The ministry set a standard price of Rp.200 for each plastic bag, though some cities, including Jakarta, have set a higher price. The Jakarta administration, for example, is planning to impose a price of Rp.5,000 for plastic bags across shopping malls and traditional markets. Meanwhile, Balikpapan plans to implement a pay rate of Rp.1,500, Tangerang Rp.500, and Makassar is aiming to make buyers pay Rp.4,500 per bag.

But to what extent can this policy address the plastic waste problem in Indonesia, the world’s second largest plastic waste producer after China? And what is the price worth paying for a plastic bag?

In order to gain answers to these questions, Kataanda.com, an online survey platform managed by MarkPlus Insight, conducted a national survey. MarkPlus Insight is the market research arm of MarkPlus Inc., an integrated marketing and consulting company based in Jakarta.

The survey witnessed participation from 663 respondents, reducing the margin of error to under 4 percent. 40 percent of the respondents were from Greater Jakarta, while the respondents from various other cities – owing to their small percentage – are combined into non-Greater Jakarta participants. Gender-wise 49 percent are women and occupation-wise, 51.1 percent are employees. As for age, 68 percent were 30 years and below.

The survey shows that up to 89 percent of female and 76 percent of the male respondents are willing to carry their own bags from home when shopping.

When asked about the best design for the bags, both male and female respondents agreed that it should be practical and easily foldable. It should also be strong and lightweight, as well as easy to clean.

According to Haryadi, Chief Operations at MarkPlus Insight, the survey results showed that middle-class people and netizens are already aware of the ill-effects of plastic waste on the environment, and agree with the implementation of paid plastic bags. But there is a greater need for careful consideration in determining the price and design of plastic bags, so that all segments in the society are willing to support implementation of these policies and do their bit in reducing plastic usage.

The biggest reason for respondents agreeing to the policy is because it’s useful in protecting the environment. Those who disagree, however, are worried that the policy may not be practical and add additional costs.

When asked about the suitability of price per plastic bag, 57 percent of the female respondents chose Rp.500 or lower, 20 percent chose up to Rp.1,000, and 12 percent chose the highest price of Rp.2,000 and above, as shown in the chart. 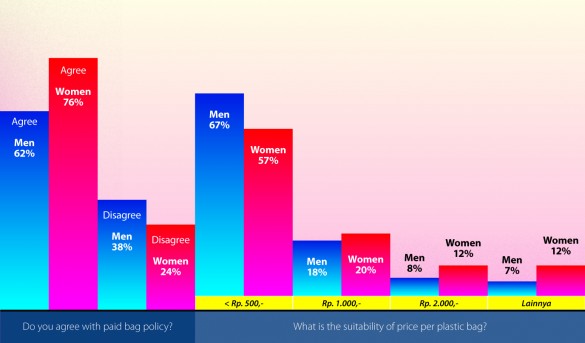