Mary’s Cancer Kiddies (MCK), a charity providing financial support for the treatment of children with cancer in Jakarta, was propelled into the spotlight when Scott Thompson, a Scottish expat working in Jakarta, ran from Bali to Jakarta to raise money in their name. Thompson successfully ran this great distance of 1,250km—with the children’s faces, no doubt, as his inspiration—making it clear that this charity was one worth going the distance for.

This noble cause was originally started in 2003 by Australian then-expat and journalist, Mary Binks. On a visit to Dr. Cipto Mangunkusumo Hospital (RSCM), Mary met cancer-suffering children in the non-infectious ward and was appalled that the families could not afford even the most basic diagnostic procedures. She promised then and there to pay for some of the tests required, eventually realizing that the issue was far bigger than just finding money for a few scans. “I would need to start raising serious money on a grand scale to help as many children and their families as possible. And so the idea of MCK was born,” Mary tells me. Mary’s philosophy is that “a life not lived helping others is a life not lived.”

Mary felt very strongly from the beginning that her organisation would not just be about money, but also about being there with the child until the very end: “It’s incredibly difficult to watch a seven-year-old die; a child who should be riding a bike or kicking a football not knowing what the inside of a hospital even looks like. It’s an experience that stays with you for the rest of your life…”

In 1999, now-MCK Chairwoman Julie van Laarhoven moved to Indonesia with her husband, meeting Mary at a playgroup in 2003, where she felt compelled to support Mary’s cause. “I was with the International English Service Church and our life group felt strongly that we wanted to do something to help and so we raised money to pay for chemotherapy for the children,” Julie explains. “When Mary started, she would meet the children and their families and would write these beautiful profiles, spending time to hear their hearts. This made it difficult for sponsors to say no to such a desperate situations to help the children get medical treatment.” 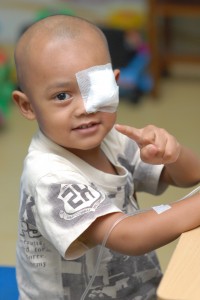 When Mary moved to Israel and then eventually home to Australia, Julie and a team of five passionate volunteers—including two Indonesian dentists—have continued to keep up the amazing work for the children. “It was heart-wrenching leaving MCK, the patients and their families,” Mary explains, “but Julie and a succession of extremely wonderful volunteers transformed MCK into an organisation more far-reaching than I could have imagined.”

Today, MCK works together with six doctors, sending them money every month to help cover the costs of cancer treatment, as well as other illnesses, for children and premature babies at RSCM and Rumah Sakit Kanker Dharmais (RSKD). “The doctors are our ears and our eyes and we’ve worked with the same team since the beginning,” Julie explains.

Meetings between MCK volunteers and doctors take place on a monthly basis, which has established very solid relationships, and doctors find it extremely helpful to know that there is money available, ready to be used for children’s treatment when needed. The doctors spend the money on low-income families only, and there is utmost trust between them and MCK volunteers. Monthly reports are produced by the doctors, including invoices and receipts, keeping everything transparent.

On top of providing financial support for treatment through MCK also provides prosthetic eyes for children who have retinoblastoma, a very aggressive type of cancer, which usually requires surgery and removal of the affected eye. Julie also personally provides emotional and spiritual support on her visits to the hospital. “Sometimes I bring other women from my prayer group and we ask parents if we can pray for their children in the hospitals, regardless of their religion. We are always received positively,” Julie explains.

In 2014, the Badan Penyelenggara Jaminan Sosial Kesehatan (BPJS) system came into effect, providing healthcare for Indonesian families. Through this system, however, not everything is always covered, especially when it comes to cancer, as MCK quickly learned. There is a list of all medicines covered by BPJS, but there is a cap on the amount that the government will cover per medication, per patient. Low-income families who aren’t able to cover the remaining costs will be supported by MCK. A downside Julie has seen in the new system is that it often takes time for families to apply for BPJS and get the correct paperwork together, which can contribute to the child’s situation worsening. Since its arrival, however, Julie has seen more and more private hospitals opening their doors to the system – a very encouraging development.

Working with sick children must be extremely hard, so what keeps the MCK team going? “There was a boy named Bayu. He had a tumour the size of a football on his eye socket. He came from a little village in Riau that doesn’t even have electricity and their family somehow managed to bring him over to Jakarta. I would go to Cipto and sit with his mum and dad while he underwent treatment and surgery. After Bayu was cancer-free, his mum would call me every couple of months to thank me for helping him. You can’t put that feeling into words and that’s what keeps me going,” Julie answers as her eyes tear up with emotion.

It is a shame that the government has never acknowledged this organisation’s hard work and efforts to support the children of Indonesia and Julie’s message to them would be to continue to improve the BPJS system because—although not perfect yet—it certainly does help.

Mary dreams that all Indonesian children have the same opportunities to live as children in developed countries have, hoping that Indonesian babies will no longer be abandoned at hospitals when a mother can’t afford the care. “My adopted son had to be abandoned at a Jakarta hospital 15 years ago because his birth parents couldn’t afford the emergency caesarean that saved both his and his birth mother’s lives,” says Mary.

The work of MCK is done solely through their generous sponsors. “We really appreciate our donors and it’s because of their generosity and commitment to raising funds for the cancer kiddies that we’ve been able to continue,” Julie says gratefully.

When asked what inspires Julie to keep going, she replied, “When you visit the children in hospital, there’s just so much fear on the parent’s faces. They’re so afraid because they don’t understand much about cancer, and they are worried because of how much treatment will cost. As a mother you’d do anything to help your child. It doesn’t matter what it costs.”

If you’d like to help volunteer or donate to this worthy cause, please visit www.Maryscancerkiddies.org