This award-winning author and journalist has flown with mercenary bush pilots in the Congo, ridden reindeer in Siberia, and written the most substantive book on Michael Rockefeller’s disappearance in New Guinea: Savage Harvest: A Tale of Cannibals, Colonialism and Michael Rockefeller’s Tragic Quest for Primitive Art. He will be at the Ubud Writers and Readers Festival from October 1 – 5.

What was your latest adventure?

I had a piece come out in Outside magazine recently about an attack back in September in Papua New Guinea on a group of Australian trekkers. The story was a long, deep dive into what really happened and, in particular, how the attack was less about robbing the Western tourists — as was commonly reported at the time — than long-simmering internal cultural issues and economic disparities. But, like Savage Harvest, it highlighted what can happen when Westerners travel to remote and complex places that they don’t understand.

What has been your most difficult project so far?

Savage Harvest — writing about the disappearance of Michael Rockefeller was the most challenging and gratifying story I’ve ever written. It involved almost two years of deep archival research in the Netherlands and the USA and then deep reporting that took me to Indonesian Papua twice, each time for two months, during which I was digging into events that were 50 years old in an incredibly rich and complex culture. It meant learning a new language, or at least the rudiments of one; living in a remote village without power or plumbing or stores with a family, alone, for a month; weaving together the history of Papua, the history of so called “primitive art” collecting, the history of Dutch colonialism, the history of the Asmat, all into a coherent and hopefully riveting narrative that provides not just entertainment, but insight into all of these things.

What inspired you to start your mission to write a book about the mystery of Michael Rockefeller’s disappearance?

I began travelling to remote places at about the same age as Michael. In my 20s I saw Dead Birds, the film he first worked on, and his story resonated with me, not only his disappearance, but his curiosity and need to go in the first place. His death took on the quality of myth — Michael disappearing in an alien realm that was difficult to penetrate for us Westerners — an idea echoed by the press accounts of the time. Wrote a LIFE photographer, after a day of searching for Michael: “they say if a man falls in the mud he cannot get up without help…” which I knew not to be true — the Asmat had been rolling in that mud, spreading it on themselves, walking in it and living in it for 40,000 years.

By the time I began thinking about the story as a possible book project, I had travelled as a reporter to some of the furthest nooks and crannies of the world, and I saw those distant places as real places full of real people with real stories that, with effort, weren’t alien at all, but penetrable, untangleable. And there was enough about Michael’s disappearance that I believed there was more to know; I believed it wasn’t a myth, but a real person who vanished in a real place and that I might be able to pierce it with patience and persistence. 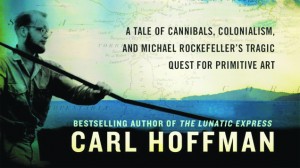 Initially all your questions to the jungle-dwelling Asmat were met with silence. Tell me about your investigations in New Guinea and how you broke that silence.

I can’t really say I “broke their silence”. On my first trip to Asmat I visited the village twice, and once brought some elders from the village out to the government centre of Agats. At first I asked about the events leading up to his death, the events that set up its inevitability ­— a war between two villages and the Dutch government raid that left five dead as punishment for that war — and the Asmat were quite forthcoming and remembered events in great detail, as they do, since they are a people without writing for whom storytelling and song is a rich tradition. But when I asked specifically about Michael, I was met with prevarication and obfuscation, though never outright denial.

Frustrated and running out of money and time, after 60 days in Papua, I went home and started writing.  But then one day I simply stopped. It was clear to me that I didn’t know enough — I didn’t understand the complex Asmat, the place, the culture; I didn’t understand head hunting and cannibalism; and it hit me that I was guilty of the worst sin of journalism — that I had been travelling too fast, that I had been parachuting in and expecting these proud people to just spill all of their secrets, things that were inextricably linked with their sacred world. And I’d been doing it with a whole retinue of people — a translator and boat man and a cook and their assistants.

That’s when I changed things up — I learned Bahasa — not a lot, but a lot more than I would have thought possible — and returned to Papua and moved to the village, alone. I asked nothing for weeks. Just ate with them, smoked with them, talked with them, lived with them and listened to them. And I was lucky, because the village was building a new jeu, a new men’s house, and it was a time of feasting, singing, drumming and dancing and they welcomed me among them. After about three weeks, I finally began asking questions again, but this time very specific ones that had to do with village family lineages and politics, and it was the answer to those questions that confirmed for me that their parents had killed Michael Rockefeller.

How did your quest in 2012 compare to Michael Rockefeller’s in 1961? What was his biggest mistake?

Well, he was buying up art and I was looking for stories, his story and the complex backstory that led to his death. We were both treasure hunters, of a sort, but he travelled very fast, with a lot of money and as much as he wanted to understand the how and why of the objects he was collecting, he was also ignoring, to an extent, its sacred component — that he was trafficking in the souls of men. Had he had less money, had he been older, I think he might have slowed down, been forced to rely on friendships and personal relationships more, and that might have saved him.

The first nine pages of your book ‘Savage Harvest’ is a step by step account of the Asmat’s sacred ceremony and Rockefeller’s fatal end. Describe that ritual and why you think it was within their cultural ethics to do so.

The Asmat did all sorts of things that are taboo, or were, in Western culture. They hunted heads. They ate human flesh. The men had sex with each other. They shared each other’s wives at times. They could drink each other’s urine. But those things were as right to them, as normal, as taking communion. And although they fought with each other, they also lived in incredible harmony within their world, in balance with it, and their warfare was nothing like the destruction that occurs and has occurred throughout much of the rest of the world. Ironically, Michael was killed because a Dutch official punished a village for fighting by machine gunning its most important men. Michael was killed according to the ancient Asmat origin myths in which the first brothers of the world learned to create new men via the fruit, the seeds — the heads — of men. To us — and to them now — it seems horrific. 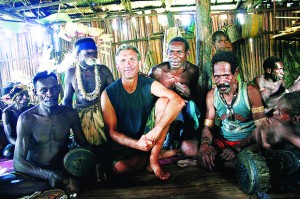 Do you have some wisdom to share for young writers?

You have seen so much of this world. What is the most common factor we all share as human beings?

We are all subject to the great emotions that power everything we do — love, rage, jealousy, fear, loss, loneliness, wondering who we are and how we got here. Every myth and story and religion is struggling with those same questions.

We look forward to seeing you in Bali!