One of the most difficult shots in golf is the pitch or lob shot, especially from close around the green, and amid the ‘sting of battle’. Let’s say for example, your ball lies off the green, only 25 yards from the pin. Normally you could get up and down easy with a chip and a putt. The only problem this time is that a sand bunker lies between you and the green. To make matters worse, you have only 15 feet of green to work with due to the relative position of the pin. In tournament competition, this delicate shot requires nerves of steel and would test the most seasoned of touring professionals. It is characterized by high trajectory, a soft landing and just the right amount of roll.  Good luck when there are seven skin carryovers riding on the outcome of this shot. “Inside the leather” and it’s all smiles and high fives.  Blade it thin into the bunker and your partner files for divorce! 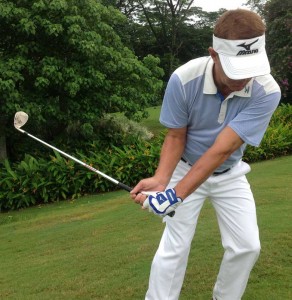 Here’s a swing tip that will help you in any pitching situation and especially in the one described above. “Pull it, don’t flip it.” Pull the handle of the golf club throughout the entire swing. Often in pressure situations, a player can become ball oriented, ‘hitting’ at the ball instead of swinging through and past the ball. Adding unnecessary wrist and hand action only complicates matters. I recommend the following: take your normal backswing and allow your wrists to hinge naturally. On the downswing, as you turn, you should feel pressure on the hinge formed by your wrists and hands; allow this pressure to remain constant throughout the swing. Do NOT try to ‘release’ it by any manipulation of the hands or wrists, especially a flipping or casting of the club with the hands. As the body turns, the club is pulled along the swing path. Centrifugal force will release the club through impact with the ball and not by any helping activity or manipulation of the wrists or hands. Just keep turning through and past the ball. Instead of hitting at the ball, the ball simply gets in the way of a complete swing. Try this pitching technique at your next practice session, it really works.

Until next time, hit ‘em straight!

Yoga in Nature; Nature in Yoga

How to Handle Stress at Work

No Target Set for Indonesian Team in the 2017 SEA Games

Exercises to Get Rid of Man Boobs