We’ve all seen them. Dickensian scamps clad in orange t shirts, scarves and joker hats hanging perilously on the roof of a metro mini or kopaja on match day. They are fans of Persija, the biggest football club in Indonesia’s capital city. Persija is an acronym for Persatuan Sepakbola Indonesia Jakarta and their passionate followers are known as Jakmania. Despite finding victory elusive over the last decade Persija remain one of the biggest clubs in the country yet they remain the club people love to hate.

Middle class Jakartans loathe match day when their trips to their favourite mall can be caught up in a procession of vehicles big and small carrying fans to a home game. They at least would have been happy over the last few seasons as incidents in and around their home stadium of Bung Karno in Senayan have forced the club to play their home games as far away as Malang, Yogyakarta, Semarang or Solo. There was even one game played last season at the PTIK Stadium near Blok M without any fans present.

While it is convenient to label all Persija fans as Jakmania not everyone is a fully paid up, card carrying member of the official supporters club. The Jakmania itself is one of the better run supporters clubs in the country with a structure on a par with any organization and hold elections every couple of years to decide on a new leader to represent the interests of the fans.

Match day sees the Jakmania try and bring their organizational muscles to bear. There are district coordinators who hire transport to shuttle-in supporters from their area while other volunteers take care of security issues in and around the field.

It doesn’t always work of course. Witness the volatile game with Persib Bandung last season which ended with a number of fans assaulted and killed, one ostensibly for wearing blue; the colour of Persib.

As well as the Jakmania, the largest fan group, there are other groups that are trying to carve out their own identity. The Casuals for example are a group of lads who take their inspiration from the Casual movement of the early 1980s in England that took over football terraces for a while. Like their UK antecedents they eschew club colours, preferring to wear branded clothing like Lacoste, Fred Perry or Adidas.

Another distinctive group are the Ultras whose inspiration comes from the Italian Ultras. Loud and brash, they favour large banners and flares and they occupy their own section of the Bung Karno Stadium, adding to the colour and the atmosphere of match day.

Visiting fans have their own section of the stadium, but few clubs travel with large numbers of fans and those that do are treated with respect by the bulk of the home support; when arranging for visiting supporters the two supporters clubs will liaise between themselves and certainly within the Bung Karno Stadium, it is a common sight to see a handful of Persija fans in the away enclosure providing an extra layer of security. 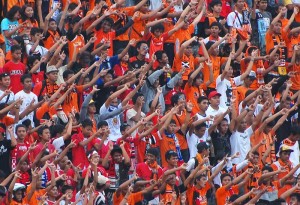 Persija are one of the few clubs in the country who regularly take followings away from home. It is something they have had to get accustomed to of course in recent years as they have been forced to play so far from home. It is not uncommon to see something like 1,000 Persija fans travel by rail or bus across Java to cheer on their heroes and again the journeys will have been organized well in advance. One away game saw them travel by train to Semarang where they were met by fans of PSIS, the local team there.

The PSIS fans arranged some basic snacks and rudimentary toiletries before the Persija fans carried on their trip across country in trucks and buses. Talk to anyone involved in Indonesian football and they will all say the highlight is the fans. Quite simply the atmosphere is amazing. I recall one game at Lebak Bulus, which Persija used before moving to the Bung Karno. Lebak Bulus is a much more compact stadium only holding 12,500.

At this particular game the stadium was full long before kick-off and the noise was deafening. I’ve been to games in England, Italy and Germany over the years but have never seen much that could rival that night. It was non-stop singing and dancing from all sides and corners of the stadium. For once the cliché that a stadium was rocking was true.

Just to confuse things there are two leagues in Indonesia and the two leagues each boast a Persija and a Persitara. The other league is known as the Indonesia Premier League and is the one set up under the auspices of the local football association. Both the ISL and the IPL are due to merge by the end of 2014 at the latest.

Persija, the IPL version, have been told by a court of law they may not use the Persija name. The fans have told them they cannot use the name and indeed Persija IPL last season played their home games in distant Madiun in front of a few bemused locals.

Persija are currently preparing for the new Indonesia Super League which kicks off in January and if you find you can take in a home game I urge you to get down to the stadium and enjoy for yourself one of the great Indonesian experiences.

Be warned though. Finding out about games can be difficult if you don’t have access to the local media. The best resource is probably the fan club website www.jakmania.org

Parents, Here’s How to Help your Overwhelmed Children