As best as I can make out, the last time Indonesia hosted a European national team was back in December 1977 with USSR. The game ended in a 0-0 draw and there isn’t much information out there about it.

When it was announced the Netherlands were coming to town you can imagine how excited people were. Numbed by the constant games with near neighbours Singapore, Malaysia and Thailand, finally here was an opportunity for fans to see some genuine world class players up-close and personal and they were going to enjoy every moment of it. 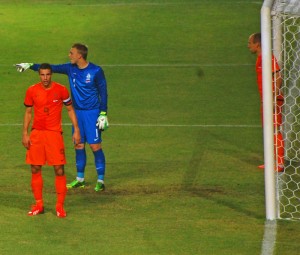 It started at the airport when a jaded Netherlands squad touched down in Jakarta to be greeted by hundreds of singing, dancing fans shouting out the names of players like Robin van Persie and Arjen Robben; players they had previously only known from TV.

The opening press conference was the usual banal blandishments. Jetlagged coach Louis van Gall said plenty of nice things about Indonesia and Indonesian football while in truth what he really wanted to do was get some sleep or get some quality down time by the pool. But then these tours are as much diplomacy as football.

The interest in the media was intense. On the Tuesday before the game I had gone to see Persija play Persipura in the Indonesia Super League. It was an exciting game between two in form teams which Persipura just edged with a cracking long range effort, just minutes from the end.

The media presence was the usual suspects, covering the game for the local papers, and the crowd was the usual passionate affair you expect at Indonesian football matches. But while the kids who go to the local matches are the proverbial bread and butter of the game, they were mostly priced out for the Netherlands game. The promoters needed that affluent Indonesian middle class we keep reading about to recoup their investment.

On the evening before the game, the Dutch held an open training session at the Bung Karno Stadium before a small crowd of a couple of thousand. Their excitement was palpable. A bus drove into the stadium through a large entrance and the crowd went wild, until they realized it was empty. A white guy walked onto the pitch and received a welcome he could have only ever dreamed about as he placed the plastic training cones down on the bumpy surface. 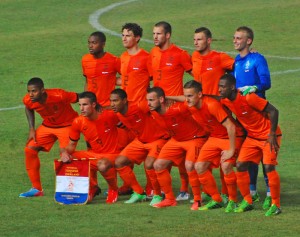 Eventually, a fashionable one hour late, the players deigned to make an appearance, walking onto the field in small groups in their depressing grey training kit. The crowd went crazy as two thousand smart phones were held aloft in tribute to the Dutch superstars, within minutes social media was buzzing with ‘I am here’ pictures recording the momentous event.

Fans of Indonesian teams routinely watch their players training, but for these supporters, whose heroes were based thousands of miles away, this was a big event and they made sure they recorded every minor detail, be it Robben offering a hint of a smile or van Persie throwing out the briefest of waves.

And so to match day. The area around the stadium was more gridlocked than usual as fans made their way to the ground. There were more than 2,500 police on duty, but they could do nothing about the overcrowding on the ring road outside the stadium in the hours preceding the match.

Fans jostled past parked cars and motorcycles while vendors had found a piece of concrete to set up shop to sell their wares. They soon found the biggest threat came not from thieves, but from being trampled. It was uncomfortable and left many wondering whether the events of 2012 at the SEA Games Final between Indonesia and Malaysia, which resulted in severe congestion and a couple of deaths had been learned. 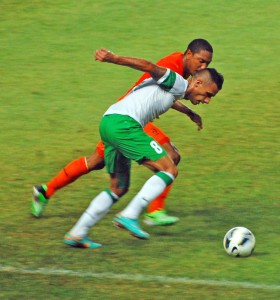 Amid the human crush was the surreal sight of a hospitality tent provided by a five star hotel, offering canapés and cold beer to their select clientele. You can’t help but wonder what the fans made of seeing a few people leisurely sipping beer while they were being pushed hither and thither by a human tide that had a life of its own, precariously trying to keep their balance while keeping their possessions close.

Inside the stadium the atmosphere was not the usual boisterous Indonesian affair. It couldn’t be, most there rarely, if ever, attended football matches – they didn’t know the songs and they didn’t know the names of the players beyond a handful of Dutch stars. Instead, and feeling that need to belong that defines a crowd, they blew their vuvuzulas and happily took pictures of each other while waiting patiently for the inevitable Mexican Wave.

There were families, there were work groups, there were loners. Many had come wearing replica shirts with many Indonesians seemingly content to forget the problems the countries have had in the past by wearing Dutch orange. If only politicians could show such maturity.

What about the football you ask? Yes, a game was played and the Netherlands won quite comfortably 3-0. But the football and the result seemed irrelevant. This was about 72,000 fans turning up to watch a European nation play a friendly in Indonesia for the first time in nearly 40 years and about how the Indonesian people welcomed them to their country.

They have seen the likes of Singapore, Malaysia and Thailand get to host a series of big names over the years, but Indonesia has long been overlooked as terrorism and mismanagement have taken their toll. With the Dutch in town, complete with historical baggage and Robin van Persie, Indonesia was able to send out a powerful message. The years of living dangerously are coming to an end and Indonesia is once more open for business!