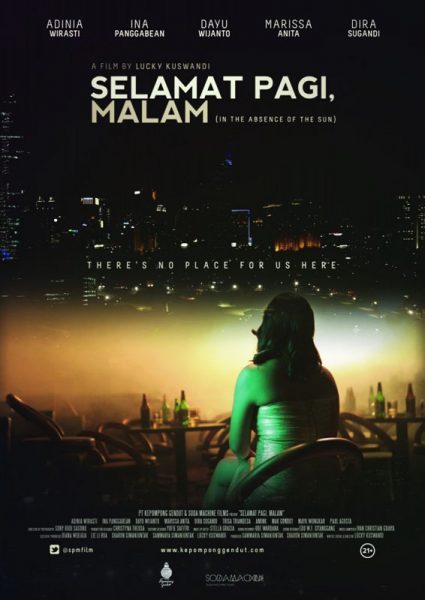 Jakarta is so much more than meets the eye. Behind all the night lights and afternoon smoke of pollution and crowds bustling, there is a different face of Jakarta. It seems that behind one mask, another reveals itself, like peeling an onion. To be frank, the Jakarta scene is more truthful and honest at night, when the underbelly society meets the darkness of the night, creating raw explosions only few creatures of the night would know. This is when the whispers of passion and perhaps a dash of crime are brought to [dim] light. But above it all, Jakarta is a city that thrives and survives.

A new movie by newcomer director Lucky Kuswandi, depicts that kind of Jakarta, a city that was described by him as a “prostitute”, having its cracks and being far from perfect, but one that goes on living life as best as it knows how.

Selamat Pagi, Malam (In the Absence of the Sun) was premiered and opened for public viewing on 19 June, 2014. The 94-minute film is equipped with English subtitles, and casually slips in conversational English in to the dialogue. As one of the most creative young filmmakers of the era, Kuswandi has said that this film is a very personal one for him, taking scenes from different stages of his relationship with the city. The title is derived from the characters’ union with a night in Jakarta, where the line between morning and night is at times blurred together.

Taken from three angles, the film uses a parallel multi-perspective view of a night out in town. The main characters involved experience a different night compared to what they had imagined to have. Their paths cross during the course of the night, but never officially meet with each other, creating an impression of fleeting serendipity in the city’s urban life. With their unique intents of how to spend a night out in Jakarta, they end up with more than they bargained for, but ultimately reaches emotional resolution as the night comes to a close and it is time to say ‘good morning, night’, or ‘selamat pagi, malam’.

The film starts with a portrayal of Jakarta that is easily seen and experienced; the heat, the traffic jams, the public transportation and street food. Slowly but surely, different layers of the city are illustrated, including the underground night life, social disparities and prostitution. However, the film does not forget to include happier notes, like finding joy in eating street food, nostalgic elements when walking down a neighbourhood where one spends their childhood and hearing laughter of children, living carefree and cheerfully. Gia, played by actress Adinia Wirasti, is a 30-year-old Indonesian who spent the better part of the last decade in New York City, USA. Her return to Jakarta was welcomed by a nagging mother, self-absorbed peers and an uppity society; a complete 180 from the Jakarta she was used to. With a new view of this seemingly odd Jakarta, Gia, feeling out of place, takes soul mate Naomi (Marissa Anita) on an adventure for the night, resulting in a sombre realization of Jakarta’s circumstances and having to come to terms with striving to find her ‘place’ in the city.

From another angle, Indri (Ina Panggabean) just wants to live a little in this city of possibilities. Through her love of online chatting, she sets up a date with a too-good-to-be-true man, and was disappointed upon meeting him. The excitement of a thriving night in Jakarta was finally had by Indri, with someone she meets at a random chance encounter. Such is the potential of an unpredictable big city.

Mrs. Surya, affectionately referred to as ‘Ci Surya’ for her Chinese heritage, is a mourning widow and the story’s third vantage point. Having just lost respect for her deceased husband, Mr. Surya (who encountered proof of his cheating with a lady named Sophia), she sets out to find Sophia (played by singer Dira Sugandi), who works as a singer-cum-prostitute at a dingy lounge of a dodgy love hotel. Ci Surya, never truly finding her ‘place’ outside of associations to her husband, experimented with what the night has to offer – booze, drugs, etc. – perhaps even picturing herself in her late husband’s position when he comes to these ‘nocturnal’ places. Eventually, Ci Surya finds peace in understanding the poignant nature of desire, the ephemeral essence of moments and ultimately knowing herself as simply Sara, instead of Mrs. Surya.

The dynamics of an urban life is cooked and presented well in this homage to Jakarta. It was purposefully premiered close to Jakarta’s 487th anniversary in celebration of the vibrant city. Newcomers, expats and tourists (even long-time residents of Jakarta) could take a pointer or two on how to familiarize themselves with Jakarta’s ways by viewing this film. You’d be surprised of how many clichés we commit just because we have grown accustomed to a certain lifestyle in Jakarta. This movie encourages its viewers to take a step back and review on the things we do in the name of being ‘accepted’ in this city. Selamat Pagi, Malam is a big ball of emotion and it will take you on a rollercoaster ride through it all; sadness, happiness, contentment, surprise and even remorse.

The Jakarta that continues to thrive despite its idiosyncrasies is reflected in the inhabitants of the city itself. Jakartans are survivors, they adapt well to changing environments, even if at times they feel like ‘there’s no place for us here’, as the tagline suggests. Settling in to this city is not without its challenges; even those who are return visitors face problems adjusting back to the lifestyle. Selamat Pagi, Malam offers a glimpse of the struggle and complications that make Jakarta a unique city to live in. Jakarta is pictured in this film as the true city that never sleeps.

Jakarta or Manila: Which Southeast Asian Megacity is Safer for Women?