The Jakarta Players are a group of people, young and old, from working mums and dads to students, from teachers to ladies who lunch, both expat and Indonesian with one thing in common; the passion for theatre. Come rain or shine, they gather for evening rehearsals during the week as well as rehearsals over the weekend to put on three productions a year and always with the heart and soul of a professional West End or Broadway performance.

Last year we saw the likes of Snoopy and the gang in the musical, You’re a Good Man, Charlie Brown, a murder mystery in The Real Inspector Hound, and a Russian government gone mad in The Government Inspector. The first show of this year will be (drum roll please…) Happily Ever After (applause, thank you…) which tells the comedic story of Cindarella, Jack and the Beanstalk, Little Red Riding Hood, the Baker’s Wife and Rapunzel after their so called happy endings. As it turns out, there’s no such thing!

Cinderella hates her philandering husband, the Giant’s wife has come down from the beanstalk seeking revenge on Jack and everyone else is basically miserable. This comedy musical fairy tale is suitable for all ages and shows everyone coming together to save one another in the end. 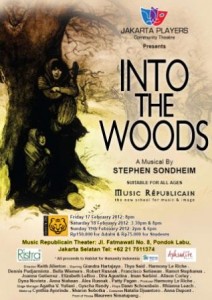 Rehearsals started in December last year and the show is set to be staged over the weekend of the 17th to the 19th of February for five shows at the Music Republican Theatre in South Jakarta. Directed by Keith Allerton, a teacher at Jakarta International School, Keith has directed over 50 shows and been in 75 himself. Keith is a self-confessed ‘drama queen’ who found Jakarta Players to be his saving grace when he moved to Jakarta in 2003.

“I see work as work. This is play,” Keith tells me. “The key is to be able to balance your family and work life as well as Jakarta Players.”

Producing this play is Keith’s partner in crime, Harmony le Riche who is a working mum. “I wouldn’t do it if it wasn’t Keith directing. He’s efficient, he’s got rules and he sticks to them.”

The cast are made up of nine JIS teachers, three high school students and one alumni, and nine Indonesians who are part of the Jakarta Broadway Singers and Jakarta International Community Choir. Keith will also be playing a supporting role as Cinderella’s Prince due to unforeseen circumstances. I joined the gang at one of their rehearsals and had goose bumps. These guys are seriously talented. All proceeds from this show will go to Habitat for Humanity, Indonesia so hurry up and book your tickets and don’t miss out on what’s set to be a wonderful journey into fairytale land.

Important Tips That Will Help You Clean Your Car Engine

Artful Splendour and Refinement at the Raffles Sunday Brunch