The word Biryani ethnically means rice in the Persian language, for Persia, is where the world-famous dish is said to have originated from.

There are various theories related to the origin of this scrumptious dish which has become the staple “nasi goreng” for several Asian cultures and cuisines.

Many historians believe that biryani originated from Persia and was brought to India by the Mughals. Biryani was further developed and enriched in the Mughal royal kitchen and has evolved into this finger-licking one-dish-meal. Meat and rice are combined in a delicious curry and Biryani have its stamp in most Asian cuisines.

While the North Indians have maintained the Mughal style of the rich moist meat-filled version, the Afghan, Iranian and Saudi Arabian biryani have a simpler, drier yet fragrant version of biryani.

Belonging to a family of serious foodies, the COVID-19 lockdown saw us spending more time talking, cooking, and researching food options. We embarked on a serious gastronomical adventure and every week, we started ordering one biryani from a different eatery in DKI Jakarta.

We tried to focus on small eateries and cloud kitchens. After two months of weekly adventures, we decided on five biryani finalists that cover the entire range of biryanis available in Jakarta.

Our first choice came from a Mediterranean and Indian-themed restaurant in Gading Serpong, Zibaa Indonesia. Presenting the unique taste of biryani rice, making their mainstay menu, namely Wagyu Beef Ribs Biryani and Persian Lamb Biryani, was chosen as one of the hits menus among other menus. When we try the hits menus, their tender meat and typical biryani rice will surely arouse the appetite of Indian food lovers.

Although it has an authentic taste of spices, Zibaa Indonesia effortlessly combines herbs to suit the tastes of Indonesian people without changing the original flavour. Not to forget, we also highly recommend eating at the place because they have a spacious, modern, and catchy place. Their spot looks so good if you want to take a picture for Insta Lovers, and when you enjoy the food, you will feel like you are abroad.

Chai Papi caught our attention for several reasons. This eatery has the most interesting Desi (indigenous) Pop branding. A lover of pop-art, we loved everything about this eatery. Our sample was chicken biryani and the first thing that struck us was the extra-long grains of rice and that each grain was beautifully separate from the others – that’s a characteristic of basmati rice and had none of the mushy stickiness of Indonesian rice varieties. Each rice grain was cooked to perfection and was light and fragrant. The flavours were well-balanced and the aroma was strong; delicious yet not over-powering. Price point was also affordable and the value for money was good. The next accolade for the Biryani research is from another small urban Indian takeout eatery called Masti Jakarta. Our Biryani journey actually started with Masti, while ordering the Vada Pao (potato burgers) – our favourite take away from here. Having ordered their Vada Pao, we decided to see if their biryani was as good. We ordered the lamb biryani and were immediately struck by the powerful flavours. Perhaps a little freshness of spice could make the flavours richer and more balanced. However, it was a tasty dish which had a rich, wet texture. The aromatic flavour of their lamb curry was perhaps what won them higher points in our rating spreadsheet. We did end up feeling the cook knew his Indian spices well enough to create a punchy blend.

Our next choice, Biryani Khan, is a small eatery with a big heart. Each portion of the chicken, as well as lamb biryani, was big, hearty, and generous with chunky pieces of meat inside. There were even two halves of a boiled egg covered in a generous helping of caramelised onions.

­While the grain of rice was also good quality, we felt this biryani had the look and taste of a home-cooked meal. It was wetter than other biryanis and the rice grain with a softness that could be due to using yoghurt in the cooking process. The lamb pieces were soft and on the whole, the flavour of the spices was not overpowering. Definitely, another take away is in order soon. 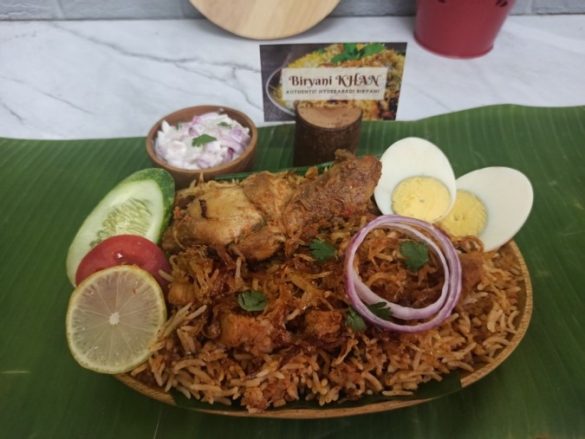 Located in Bellagio Residence Mall, Mega Kuningan, this restaurant is perhaps the biggest and most well-known Indian restaurant on our list. The biryani comes in a small earthen pot and it felt like it was a small portion, until we started scooping our spoons. The biryani was packed in tight and like Aladdin’s cave; there was good stuff until the deep bottom.

The chicken, as well as lamb biryanis, are both good. The North Indian style of biryani is always just rightly wet and curried, and Royal Kitchen seemed to have got it so right. The rice was rich with almonds and although not spicy or pungent, the burst of aroma and well-balanced flavours leaves you with a happy memory. This was a Go-Food discovery and we experimented blindly with no reference because of its interesting concept of serving biryani by kilogram. It was very different from what we were used to eating and perhaps can be said to be the meal of the simple man. For the everyday light biryani fare, this is perhaps the simplest Arab version of the dish with a portion of biryani-flavoured rice with two pieces of chicken tikka with no fuss. We felt it was a little dry to eat so we had to improvise by pouring in the accompanying sauce which then made it a tad spicy. The Basmati rice consisted of the longest grain we have eaten yet and cooked perfectly al dente. The biryani-flavoured rice is sold as only rice or with two juicy chunks of tandoori chicken. This biryani perhaps is a fusion of biryanis from the Arabic culture to the Afghan and Indian cultures where a drier version of the Mughal biryani is eaten.