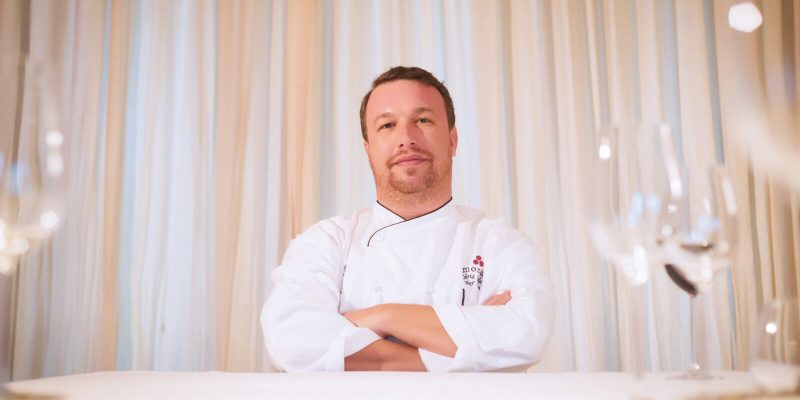 The mood soars during the weekend of the Ubud Food Festival. Held annually in Ubud, Bali, this is a joyful three-day celebration on an island that is becoming increasingly sophisticated about food. At this year’s festival which took place from April 13 to 15, master chef Chris Salans shared his celebrated Ubud restaurants with younger chefs in two events to showcase the culinary talent in Indonesia today.

Both were billed as festival “Special Events,” but they differed greatly in style – one a glamorous dinner in a garden, the other a lively lunch in a gastro-bar. What they had in common was superb food, all prepared from Indonesian produce. On April 13 at Salans’s flagship Mozaic Restaurant Gastronomique, the “Best of Bali” dinner featured six chefs, including Salans, from six of Bali’s leading restaurants. Then on April 15, he held a lunch at Spice by Chris Salans, Ubud, with the lovely Chef Rinrin Marinka.

Chris Salans is more than just an internationally acclaimed chef. He is also a dedicated teacher and mentor. Through his workshop cooking classes at Mozaic, as well as television and guest appearances around Southeast Asia, he has shared his pioneering philosophy of using Indonesian flavours with the techniques of Western high cuisine. This has now become a movement, with talented young Indonesian chefs showing exciting levels of creativity. For the “Best of Bali” dinner, some 70 guests were seated at beautifully dressed tables for six in the gardens of Mozaic, magically lit with fairy lights. Dinner began with amuse-bouches by each of the chefs: Chili Chicken Sate by Kevin Cherkas of Cuca – served from a startling platter of large fresh Lombok chilies, with the red ones stuffed with spiced chicken – followed by Tom Yam Soup by Danny Taddeo of Grow; Cassava Croquette by Mandif Warokka of Blanco par Mandif; Udang Tawar by Kieran Morland of Merah Putih and Sangsaka; and Edam Cheese and Black Truffle Chouquette by Chris Salans of Mozaic. In the background was the ringing of wine glasses as staff set up the optional wine pairing.

Chris Salans introduced the chefs, all of whom spoke briefly about the course they’d prepared, and then he reminded guests that all dishes were prepared solely from Indonesian produce.

The first course was the innovative Bali Soft Tacos by Chef Kevin of Cuca, with brown rice, braised mushrooms, and chilli salsa. Next was a very structured Black Olive Kingfish Carpaccio by Chef Danny of Grow, with cucumber, avocado, black radish, sorrel, and micro tomato consommé. The third course was by Mandif of Blanco par Mandif, a succulent 21-Day Aged Duck Breast, with baby corn, moringa, cauliflower, and the classic Indonesian sauce opor. This was followed by a rich Malang Short Rib from local wagyu beef, with taro, kluwek, black garlic, and pickled onions by chef Kieran of Merah Putih and Chef Maxie Sangsaka. The dessert was Chris Salans’ Balinese Chocolate and a surprising and fragrant Torch Ginger Flower ice cream. Petits fours were then served with coffee and tea.

For lunch on April 15 at the Spice gastro-bar, Chris Salans hosted his friend and colleague, Chef Rinrin Marinka, whom Indonesians know well from her appearance as a regular judge on Master Chef Indonesia.

Spice by Chris Salans, on Ubud’s main street, is a smart but casual air-conditioned culinary boutique with a lively, friendly staff who shout out welcome greetings in a chorus of high Balinese when you come and go. Guests may sit at tables by the floor-to- ceiling windows onto the street, but many choose to sit at the wrap-around wooden bar to watch the chefs and mixologists at work. For this event, everyone wanted to sit at the bar – the front row on a very special lunch.

First was Gohu Seafood from Maluku, a bright ceviche-style medley of locally caught fish with homemade crackers, accompanied by a fresh Passionfruit and Kalamansi Mojito. Next was a rich and creamy Gulai Soft Shell Crab with fat homemade noodles from Medan, served with a Curry Crush cocktail with fresh curry leaves. The main course was savory Nasi Uduk and the game-like Crispy Black Chicken with Kremes from Batavia and a salad of Pickled Betawi Vegetables. Dessert was a beautifully light and tropical Banana Apem, Mango, Gedong, Pina Colada espuma and Kemangi ice cream, with a Harum Manis (Sweetly Scented Mango) Daiquiri.

This year’s Ubud Food Festival was another triumph for Chef Chris Salans in bringing the good food and good cheer of Indonesia to the world.