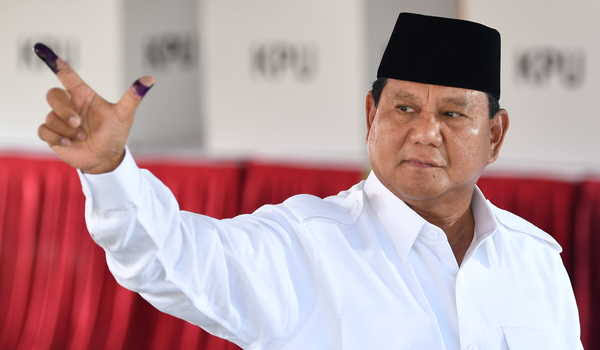 The Minister of Defence, Prabowo Subianto, has called on all parts of the nation to increase their vigilance towards the latent danger of communism, because he says that several countries that adhere to communist ideology still exist.

“Communist ideology and the communist movement in Indonesia should be assumed to still exist. We must always increase our vigilance towardw the latent danger of communism,” Prabowo said in remarks at a book review and book panel discussion titled “PKI”, as the actor of the G30S / 65 Coup at the Institution of National Defence, Jakarta on Saturday 23rd November.
Prabowo’s remarks were read by the Chancellor of the University of Defence, Lieutenant General Tri Legionosuko, because the minister was unable to attend.

In his remarks read by Legionosuko, Prabowo said that even with the collapse of the Soviet Union as a communist country, and the end of the Cold War era, it did not mean that communism came to an end. He emphasised that several countries that embrace communist ideology still exist, including China and Cuba.
Prabowo added that for Indonesians, communism had recorded “a black mark” in the course of the nation’s history, because it had been proven that communism hadtried to break down the legitimate authority of the Republic of Indonesia several times.

One of the communist protests, 30th September 1965, was aimed at overthrowing the legitimate government of President Sukarno and turning Indonesia into a communist state.