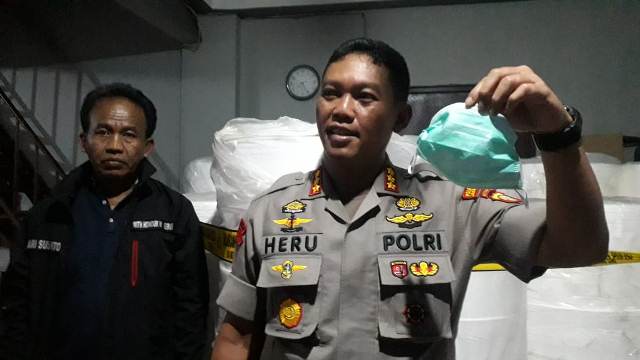 Head of Police of Central Jakarta, Heru in Illegal Mask Factory in Senen

The police department of Metro Central Jakarta raided an illegal medical mask factory in Senen on Thursday night. The factory got raided after the neighbours stated that the factory had been selling medical masks at high and unreasonable prices.

Chief of police of Resort Metro Central Jakarta, Heru Novianto, said that the illegal mask factory could have had revenue up to Rp4.7bn if all the masks that were produced had been sold.

The masks were sold online through personal chats in social media and so were very hard to be traced. “From the evidence, it can produce up to around 500,000 masks, and the revenue would be around Rp4.7bn,” Heru confirmed.

The suspect, initials DW, claimed that he tried to obtain a license back in 2015 but failed. 12 employees in the factory were taken to the police station to be investigated.

Recently, there have been 12 cases of illegal masks and hand sanitisers being hoarded around Indonesia in the past 2 days, with 25 suspects having been arrested. All the suspects are said to be violating laws about trading, namely article 107 of UU number 7 the year 2014, and maybe imprisoned for at least 5 years and fined up to Rp50bn.

President Joko Widodo stated, “I order the Chief of Police to take firm action against irresponsible parties who use this momentum by hoarding masks and selling them at very high prices. Be careful, this is what I warn.”