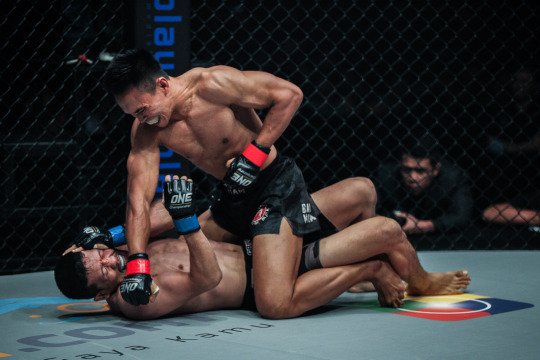 At the ONE Championship MMA event held at the Jakarta Convention Center on Saturday, January 14, three Indonesian mixed martial arts fighters impressed the home crowd by bagging two of the three fight titles that were up for grabs.

Of the three Indonesian fighters, Sunoto aka ‘The Terminator’ was the crowd’s favorite when he beat opponent Chan Heng, the popular Cambodian grappler, in the first round of the night’s third match. Sunoto earned critical points against Heng for the big punches he repeatedly landed on the opponent’s face, that the referee had to forcefully separate the fighters.

Adrian Matheis of Papua was the only Indonesian fighter unable to get a title during the match. Matheis tapped out after having a hard time disentangling himself from the grip of his Filipino contender, Rene Catalan.

The primary match in the championship was between Russia’s Vitaly Bigdash and Myanmar’s Aung Là N. Sang under the middleweight category. Winning against Sang with a unanimous decision gave Bigdash his first title defense and kept his ‘undefeated’ record.

Vincent Latoel and Anthony Engelen from The Netherlands (but with Indonesian ancestry) were among the other fighters participating in the championship fight.