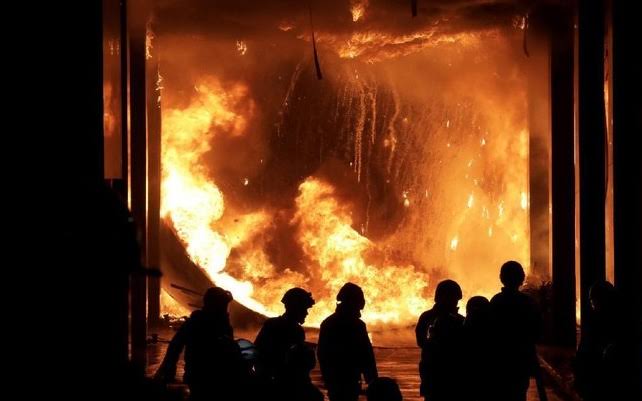 A great fire has struck the Attorney General’s Office building at No 1 Jalan Sultan Hasanudin Dalam, in South Jakarta on Saturday 22nd August at 7pm WIB.

Head of the Legal Information Centre (Kapuspenkum) Attorney General’s Office (Kejagung) Hari Setiyono said, based on an interim report, the fire in the building originated from the sixth floor which is part of the civil service.

At first, a large fire was seen on the north side of the building which then spread to the middle and to a small part of the south side. The fire spread quickly, from the outside of the building to the cavities of the outer southern wall at around 10:40pm.

Occasionally, an explosion was heard from the burning building. Dozens of fire engines went back and forth to extinguish the flames that scorched the building.

The fire brigade even sucked water from the Blok M Taman Gajah pond in Jakarta to support the water supply for the fire that burned the building. Residents were also seen watching and even taking photos and videos of the fire.

Local police have installed a police line around the location, to be precise near M Bloc, about 200 metres from the location of the fire to the Blok M terminal. DeputyDeputy Governor of DKI Jakarta Ahmad Riza Patria asked residents to disperse from the location as their presence could disrupt the firefighters.

“Those who are not interested, who are not on duty to return, so that our officers can carry out their duties better, faster, and are not disturbed by the crowd,” he said.

Coordinating Minister for Political Affairs Law and Security (Menko Polhukam) Mahfud MD said the detainees at the Attorney General’s Office had been transferred or evacuated. He said the transfer of prisoners had been carried out since 9pm. Security has also been undertaken by the police.

“The detention building is at the back of the building, some distance from the flames. Security has been tightened,” Mahfud said.

Attorney General ST Burhanuddin emphasised that there were no case files and evidence that were burned at the Attorney General’s Office Building in Jakarta.

“The most important thing is that the case files are not here,” said Burhanuddin.

He also added that no trial evidence was burned.

111 Islets to Be Part of Indonesian Sovereignty

Mount Rinjani Closed to Climbing Activities for One Year