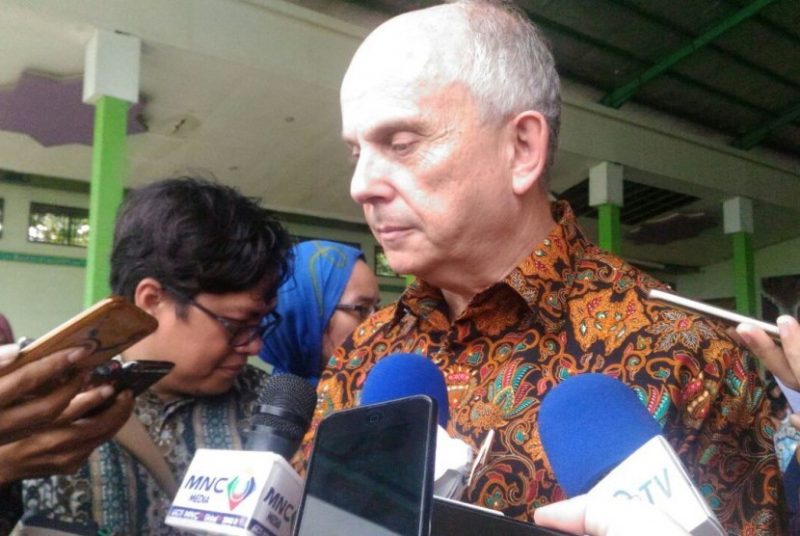 US Ambassador to Indonesia Joseph R. Donovan Jr. says the embassy in the country has been working hard to increase the number of Indonesian students who want to pursue an education in universities, community colleges, and high schools in the US.

Ambassador Donovon recently encouraged hundreds of students at the Daar el-Qolam Islamic boarding school in Tangerang, Banten, to study overseas, saying that it will widen their knowledge about the country.

The embassy will soon hold education fairs in Jakarta, Surabaya and Medan especially after they have achieved success with almost a 7 percent growth in the number of Indonesian students who studied in the US last year.

Donovan explained that as diverse nations, both Indonesia and the US share many things in common, especially when it comes to the values of respect and tolerance.

Regardless, he feels that the people from both nations still need to forge stronger relationships. Education is one of the ways to make that happen.

“”Unfortunately, we lack sufficient historical people-to-people ties that can help in better understanding across generations. So, I hope this education exchange would do more to create a solution to that problem,” the ambassador said.

Donovan was also impressed by the students’ effort to help American students adapt to the Indonesian culture. He additionally hopes that local students will continue to make exchange students feel comfortable throughout their time in Indonesia, hence attracting more to come in the future.

See: Indonesia Upset by Trump’s ‘No Entry’ Order for Refugees

Despite the hopeful remarks of Donovan, with US President Donald Trump’s executive order on immigration thus temporarily banning the entry of people from seven Muslim-majority countries, several Indonesian students have started to reconsider their plans to study in the US.

Even though Indonesia wasn’t a part of the list, they couldn’t help but worry about the growing perception of Islamophobia and xenophobia in America despite years of hard work.

24-year-old Bachtiar Romadhoni Asral initially planned to pursue his masters in banking in the US after he got accepted into Boston University, even setting aside $50,000 for his tuition, but he already feels discouraged and unwelcome.

He says, “This has become my prime concern: I’m Indonesian, an Asian and a Muslim. People can tell that I’m from outside America. It will be challenging for me to adapt to the States, even though at first I thought it wouldn’t be a problem because I felt that America was open-minded.”

Instead, he plans to head to London’s Queen Mary University since he has secured a UK student visa and the incumbent London mayor is of Pakistani descent, making them more welcome of minorities.

However, unlike Asral, Hendry Wijaya still aims to enter a US business school by next year. “We are students and we are contributing to their economy, so it should be no problem for us to go there,” says Hendry.

The travel ban sparked outrage and protests in several areas including Jakarta. But during his public lecture last Monday, Donovan had this to say: “Although I cannot predict the future, I can tell you that your country will remain an important and strategic partner of US. For our part, we wish to continue to work with you on a wide range of issues that affect both our nations.”