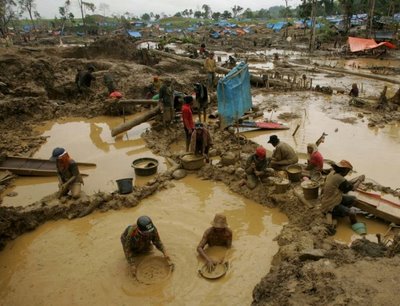 The western foothills of the volcano look rather desolate, consisting largely of dry shrubland with a few stunted trees. During the wet season some upland rice is grown, but the soils are eroded and poor. The few villages exude poverty, although many of their inhabitants are involved in small-scale gold mining. The mines are illegal as the required documents have not been obtained, let alone approval of an environmental assessment management plan. Makeshift shafts are dug by hand to haul up the alluvial mud and the lack of proper reinforcements makes them extremely dangerous. Mercury is subsequently used to amalgamate the grains and nuggets of gold in the mud.

The miners are poorly compensated for their efforts—a very familiar pattern in small-scale gold mining—as most of the profits typically go to the organisers, investors, traders and suppliers of tools and other inputs. A classic worldwide problem. During the California gold rush (1848-1855) for instance, the San Francisco businessman Levi Strauss greatly profited from selling canvas for tents and denim overalls to miners; it is probably there that he developed ideas for the famous Levi’s blue jeans.

I had come to the area by accident on a Sunday outing when I had stupidly lost my way and had stumbled upon one of the mineshafts. A friendly old man pointed out the way to get back to the main road. But before I went on my way I had asked whether he worked in the mine. “Sometimes,” he replied, “In the past every day. Now I’m too old. It’s very hot and uncomfortable down there, and dangerous. Only last week my neighbour’s mine collapsed, killing the two inside.”
“But is it worth it? Is there any gold in these hills?”
“Oh yes, there is gold, enough to keep us busy. But its price has hardly increased for a long time. The trader always has a reason to charge more for transport and for the chemicals we need. There is not much else we can do here, so we have to accept it.” And then he told me to wait as he wanted to show me a piece of gold he had found. It was a little nugget shaped like a small crown cork. If there is gold in these hills, there also should be some in the river!

The following week, together with two mates we went to try our luck at gold panning. After two hours and no gold, just as we wanted to give up and enjoy a few fried bananas made by his wife, a little boy appeared with a beat-up wok. After a few swirls he shouted, “Grandfather, is this gold?” We all went over to have a look, and yes, there it was, a little nugget shaped like a small crown cork! Someone must have taught the old man how to raise an interest in and promote the operation, or maybe it was his own idea.

When I went back with my mates we got lost again and never made it to the shaft. I thus never learned whether my brilliant advice had been put into effect. Obviously I cannot direct you to the place, as I can’t even find it myself. It is to the west of Bogor township, north of the Mt. Halimun Salak National Park. Who knows, if you somehow manage to get there, the following simple instructions will help you with panning:

Quite a complicated and time-consuming process!

“Professional” miners therefore tend to speed up the process by using mercury to amalgamate the gold grains. And rather than scooping up the mud from the riverbanks they dig shafts, or break down alluvial deposits with high pressure water jets. This certainly has increased their productivity, but at a high environmental cost – downstream from the mining operation the river water is brown from the silt and highly toxic from the mercury.

That is not only the problem faced by individuals on the micro-scale of a few dollars a day, but also on a mega-scale by large mining corporations such as Freeport Grasberg in the province of Papua, which is the largest gold mine in the world and the third largest copper mine. It consists of a large open pit mine and an underground mine. The former is visible from space as at the surface its crater is more than a mile wide. And in spite of the very high investment costs—the mine is located between 2,500 and 4,000 metres above sea level, which requires complex technological problems to be solved—the mine is a low-cost operation.

And as with the small scale [illegal] mining, the environmental effects are considerable. Some of the 230,000 tonnes of tailings that are generated each day wash into the Aikwa river affecting the lowland areas—no wonder the fish have nearly disappeared from the river. But Freeport states that its discharges meet regulatory requirements. Those in favour of the operation point out that the Grasberg mine has 19,500 employees and is the main tax payer in Indonesia (USD1.4 billion in 2009).

It is interesting to note that the Grasberg production of around 60 tonnes is less than the estimated 65 to 100 tonnes produced in 2013 by Indonesia’s 1,000,000 illegal miners in some 850 mining areas spread from Aceh in the west to Papua in the east.

Whether these production volumes and the derived incomes justify the environmental and social costs does depend on one’s point of view. But it is clear that the ones performing the hard and dangerous labour are compensated the least.