In 1974, the Terracotta Warriors were discovered in Xi’an, China, the American author Stephen King published his first novel, Carrie, and in the town of Balikpapan, Indonesia, a group of transplanted spouses from the Huffco Petroleum Corporation formed an organisation to better serve their adopted East Kalimantan (‘Kal-Tim’) community.

10 years later, the Huffco Women’s Club expanded its membership and became the VICO Women’s Club. Another decade later in 1994, this group of altruistic ladies became the Balikpapan Expat Women’s Association, but, realising this moniker was a bit exclusive and more or less against the spirit of intent, the organisation changed its name to Balikpapan International Women’s Association (BIWA) in 1998.

Regardless of when BIWA officially became BIWA, one thing has remained constant: the level of community engagement BIWA facilitates. BIWA’s roster of long-term Balikpapan supported projects include three orphanages, one specials needs school, one home for the elderly, bi-annual community dental days and various other ventures addressing unmet needs. Additionally, BIWA is the place where ladies from all walks of life can enjoy a sense of community and receive invaluable information about life in Balikpapan. 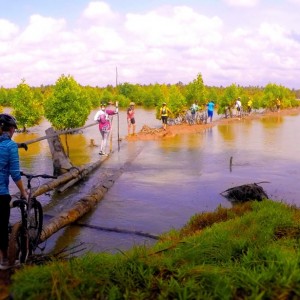 Today, this association, comprised of 15 hard-working board members and approximately 100 local and international ladies hailing from 28 countries, bustles with activity. From teaching English to orphans or socialising with the elderly, to attending local art classes, bowling leagues, book clubs and tee-off times, BIWA’s got you covered. The fees for yearly membership go back into the organisation’s heart and soul: the orphanages, schools and special needs establishments that rely onBIWA’s support.

All of that is well and good – fantastic, even – but in my book, I confess falling prey to BIWA’s charms for another reason altogether: the cycling. More specifically, the mix of urban and off-road cycling that BIWA’s informal biking group, the Balikpapan Biking Babes (BBB) has to offer. That might sound trite, but first hear me out – it won’t take long – because cycling inBalikpapancan be described in three short words:

And while it is true thatBalikpapanis a cycling heaven that remains largely undiscovered, what makes theBIWAcycling group such a special experience is the interaction between individuals who might never otherwise cross paths. It doesn’t matter where you are from, what faith or politics you adhere to, or even what language you speak. All you need to share in the camaraderie is to show up with a mountain bike, a helmet and sense of adventure.

Although BBB is often referred to as a cycling club, technically, it isn’t a club at all. There are no matching shirts, no exclusive parties; there isn’t even a membership fee. While BIWA does help promote, organise and support the cycling group, it is open to anyone. Currently the group rides are run on a week-by-week basis, with the destination predetermined a few days beforehand via email chain or group SMS. Participant numbers vary weekly as well, with some weeks seeing as few as three cyclists while others have nine or more.

Each week, the cycling route is different, but the ride usually lasts around two hours. Because rides often start at more far-flung places outside the city proper, most participants arrive at the meeting point via vehicle, and then have their driver pick them up at the end. For those who wish to join but don’t have transportation, car-pooling is often possible when planned in advance.

How does it work? 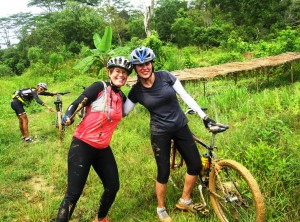 Every Wednesday morning at 8.30am, BBB meets somewhere in the vicinity of Balikpapan for an approximately two-hour ride. From there, the stupendous local guide, Pak Yayan (who is a cycling champion in Indonesia, by the way, routinely winning first place in national cycling competitions for his age group), leads the group through all sorts of terrain and circumstances one would never otherwise put together in a logical sequence of thought. For instance, BBB might start at a nondescript dirt parking lot just outside of a housing complex, and within an hour, cyclists will have traversed bamboo shaded forest trails, paved roads leading past sea vistas and long, rickety bridges spanning for metres over mangrove swamp. Take last week for example, when the ride began at an old ferry terminal offSamarinda Road, and 30 minutes later, a short break ensued inside of a tofu factory where an extremely hospitable employee provided an impromptu demonstration of the tofu-making process!

Whatever comes next is almost always an unexpected delight, and throughout the whole experience, cyclists are greeted with cheery salutations of “Hello, mister!”, high-fives and the giddy laughter of children. While all of this is undeniably fun, it should be added that it is also a lot of work.Balikpapanis a hilly town, so even with a 15-minute tofu-tour break, climbing those hills ensures an incredible workout, regardless of the route or speed of travel.

And for those wary of joining because of their personal skill level, fret no more. Cyclists of all levels participate, from beginners on up, and if all else fails, getting off and pushing one’s bike up that hill is always an option. Even better, Pak Yayan is excellent at on-the-spot quick fixes should equipment go awry – a comforting fact when one’s tire goes flat in the middle of the forest!

In summary, the BIWA cycling group is all about discovering the amazing wonders of Balikpapan, of exploring villages and fish farms, tapioca plantations and jungle reservoirs. It’s about climbing that hill you never thought you’d be able to climb and meeting the friendliest people on the planet who don’t seem to mind a single jot that a troupe of sweaty women happen to be cycling through the narrow concrete alleyway that more or less serves as their front porch. It’s about trying out a new Bahasa phrase as you make friends, stopping for photographs and learning about soft shell crab farms or how to make arak, should the need arise. The BIWA cycling group is about a lot of things – exercise included – but perhaps the best thing about BBB is that it isn’t about how good you are on a bike.

How to join the fun?

Just let someone in the group know you’d like to come along, or if that’s not an option, simply contact BIWA at the below email address. It should also be noted that BBB is not exclusive to women; it happens to work out that way as most spouses/partners in Balikpapanon dependent visas are women, but men are certainly welcome to come along as well.

Cycling in Balikpapan is hot and hilly, so a mountain bike or at least a hybrid is necessary for the types of rides BBB does. In addition to the bike, bring a helmet, gloves, sunglasses, cell phone, some money, at least a litre of water (water is usually easy to purchase at kiosks should one need more), athletic shoes and biking clothing. For pants, padded cycling shorts/pants or tights work best. Also, be sure to wear heavy sunscreen. Last but not least, don’t forget your camera, as photographing along the way is half the fun!