South of Malang in Eastern Java an uninhabited island contains deep within its dense jungles a salt-water lagoon framed from the Indian Ocean by jutting cliffs that shadow over crystal blue waters and soft white sands. Its name is Sempu Island, a remote national park off the quaint fishing village of Sendang Biru where travellers can find their very own piece of paradise and experience nature as it is, completely untouched.

We rode our motorbike up and down the windy roads of the Sumbermanjing Wetang District towards Sendang Biru one sunny and pleasant afternoon, and although we were quite fatigued when we arrived, the distinctly blue waters of the harbour and the abundance of extravagantly coloured fishing boats captivated our excitements and imagination for the journey ahead. Sendang Biru translates in English to Blue Spring, and from when we first arrived at the harbour we understood this translation as an understatement, feeling that these calm waters protected by Sempu Island from the force of the Indian Ocean were actually the “source of the colour blue”. 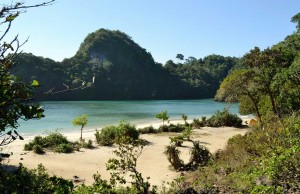 Our goal was to reach Segara Anakan, a little known lagoon at the southern end of Sempu Island, and set up our camp by nightfall, but before we, or anybody for that matter, can take the ten-minute ferry ride to Sempu Island we needed to first buy a permit from the conservation office. The locals were more than helpful, and quite experienced it seemed, with helping us locate the conservation office. Luckily, we found this little guesthouse just up the road that was owned by a very pleasant woman by the name of Ibu Mamik, who was more than informative about the procedure in procuring a permit. Ibu Mamik and her husband helped provide us with provisions like water, food, sunscreen, mosquito repellent, and anything else someone would need for an overnight on the island. Due to Sempu Island’s remoteness, none of these items, not even drinkable water, can be found there. In addition to their kind help, they allowed us to park our motorbike at their guesthouse and even offered to lease a large, six-person tent to us for 75,000 IDR. A small and basic room at the guesthouse costs 100,000 IDR per night, while camping is the only option for travellers who wish to stay overnight in the Segara Anakan lagoon.

Although they could not speak much English, Ibu Mamik and her husband were familiar with travellers from all parts of the world, and they were happy to escort us to the conservation office to obtain the permit, informing us to have the permit price of 20,000 IDR out of our wallets, as the conservation officials may rip off foreigners. Ibu Mamik arranged both a ferry ride and a guide for us as well. Ferry rides from Sendang Biru cost 100,000 IDR return while a guide will cost an extra 100,000 IDR, who will only escort you to the lagoon (we later found out that this path is fairly easy to manage on our own). In about a half-hour from when we arrived in Sendang Biru, the guide, Daniel, and myself were boarding one of those colourfully wooden boats and began crossing the ethereal blue waters of the harbour to Sempu Island.

The boat docked at as far as it could go in a shallow inlet and the guide sprang out quickly, we followed with cautious haste and took our first steps through the knee deep water. After just a few steps I heard a moan in the back and turned to see Daniel holding his broken flip flop that had snapped in the murk below, and he, of course, did not pack any other shoes.

With one less shoe, our trek through the jungle was off to a hasty start, as the guide was clearly in a hurry to get back to the boat before dark, leaving us 20 paces behind and no time to catch up.  The jungle path was wide and fortunately dry, where the slightest bit of rain would quickly change the surface to a muddy trail and extend the hike another couple of hours, making dry season the best time to visit Sempu Island. 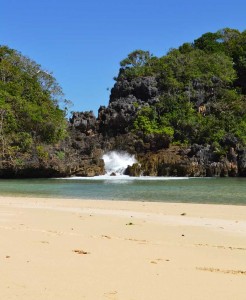 Sempu Island spans approximately 877 hectares and exquisitely features a thriving plant and animal life that includes mangroves, tropical almonds, pandans, fish poisons, and more, packing the dense tropical forest system. Also, there are reported to be over 51 species of animals on Sempu Island as well, with wild boar, the ever-present Long Tail Macaques, and a variety of birds. We even heard whispers of a belief from some locals that the extinct Java Tiger still roams on Sempu Island, though this has not been proven.

As our trek continued, we heard monkey calls and thunderous waves crashing in the distance. The path climbed up and down as Daniel lagged behind on nothing but his bare feet. We were working up quite the sweat, and finally after just an hour, the path narrowed and led us along the lagoon’s edge. The first sight of turquoise blue water was amazing and very inviting.

The daylight was quickly departing when we started to make fast work of setting up tent and starting a fire, as there are no accommodations or facilities on the entire island, nothing but nature itself. Daniel proudly declared that he would build the fire and went off in search of wood. Thankfully at that moment we met our neighbours for the night who kindly brought over a smouldering log for our own fire. It turned out we were sharing this piece of paradise with a group of eleven jeep drivers on holiday from Bromo. They were already half plastered from local whisky when we met, and it sounded like they were having a riot of a time as roars of laughter erupted from their camp every few minutes. We exchanged the international sign of friendship by passing around our gin while they reciprocated with more whiskey. Next thing we know we were sitting by their fire enjoying a barbeque of the freshest, juiciest fish. Their method of cooking was simple, a long stick gets pushed through the fish’s mouth and then it is stuck over the fire, just like roasting marshmallows. It was delicious.

The next day was spent enjoying the fruits of this dreamy paradise, as we did nothing more than lie in the sand, swim in cool lagoon waters, kick a football around the beach, and soak in as much sunshine as we possibly could. A short hike from the beach and over a few spiky rocks, we found an unbelievably charming view of the Indian Ocean as it crashed furiously into the island and stretched across the horizon. The freedom of this secluded lagoon made for a joyous and relaxing day. However, the joys of this day made us lose track of time, and by the late-afternoon we had to quickly pack our tent and all of our gear, once again hastily trekking through the jungle in order to arrive at the small inlet where the boat dropped us off before nightfall.

The entire trip to and from Segara Anakan was like our own private expedition in search of a piece of paradise that seemed lost in the middle of a dense jungle, and however intimidating this experience may sound to adventurous ears, we found the entire trip to be one free of difficulties and complications, as long as you keep your food hidden away from the monkeys.

How to get there – From Malang, Sendang Biru is about a 2.5-hour drive. Travellers can either hire a car in Malang or take a local mini bus (angkot), which changes once in Sumbermanjing (though local transport will take up the better part of the day).

Contact Ibu Mamik in Sedang Biru for accommodation and information on 085259437575.

The Magic Eels of Ambon