Celestial Wonders of the Southern Sky

“Bandung” often evokes images of the star-studded café and shopping scene. Granted, Bandung does have a glamorous charm that gets Jakartans begging for more, even if it means moving traffic hell two-and-a-half hours away down the toll road.

On this visit to Bandung, though, I thought of a real atmosphere change. Still star-studded and glamorous, but minus fancy mixed drinks named after celebrities, outfits pulled out of fashion magazines, or top notch DJs. Rather, it involves escaping urban commotion to be blown away by the cosmic greatness of the heavens.

Driving an hour northbound to the serene hills of Lembang, I intended to nurture my inner geek at Observatorium Bosscha, Indonesia’s only professional astronomical observatory and one of the few in the world’s Southern Hemisphere. The visit filled me with wonder and awe as I glimpsed into the history of the universe from an Indonesian perspective. Walking down the lush, dew-covered gardens, I entered a Dutch style study to meet Evan Irawan Akbar, an astrophysics researcher for the Bandung Institute of Technology (ITB), and Yatny Yulianty, the observatory’s curator. Having expected graying professors, it was surprising to find them in their late twenties or early thirties.

Naturally, my first question was why study celestial beings light years away when Earth itself has more problems than humankind can ever figure out.

“Why not?” smiled Yatny. “Everyone has been awestruck by the beauty of the evening sky. That in itself is a big enough ‘wow factor’ to attract people to astronomy.”

In antiquity, astronomy was important for navigation, timekeeping, and determining the seasons for planting, harvesting and hunting, explained Evan. Astronomy is the oldest science known to humankind. Most civilisations have their own versions of traditional astronomy. For ancient Javanese people, the Waluku constellation (Orion) is an important marker of the seasons, as written in the Pranata Mangsa, a pre-Islamic Javanese agricultural solar calendar bible.

“The Orion rises four minutes earlier per day. In ancient Java, at the crow of the rooster before dawn, farmers take a handful of rice grains, stretch out an arm and raise the open palm east toward Waluku. When the palm has to be raised at a high enough angle for the grains to start falling, that’s when planting season starts,” said Evan.

Now that modern technology has mostly replaced these functions, astronomy has become more of a scientific quest to answer philosophical questions about the universe innate to the human mind and heart.

Though astronomy is no longer a science with many practical applications, it often prompts other disciplines to research and develop new inventions that eventually become productive tools used by the Average Joe on a daily basis. For instance, the digital camera was invented in the 1960’s for NASA’s unmanned missions to Mercury and Venus. 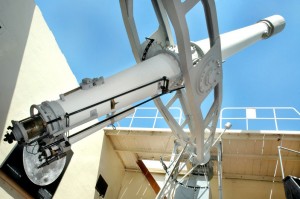 Modern astronomy in Indonesia started between 1595-1597 as Dutch explorer Frederik de Houtman sailed in search of the spice islands. When the ship got lost at sea, de Houtman looked up and noticed that the stars look different from the tropical sky. He drew a map of four constellations, used it for orientation, and ended up in Batavia and Aceh.

Back in The Netherlands, de Houtman’s countrymen were delighted with the four-constellation map and sent him on another journey to Nusantara to make a complete sky map. Subsequently, the imperalists easily found Nusantara. It marked the Dutch’s breakthrough in the spice trade and the precursor to the establishment of the Dutch East Indies colony. “It was an economical and political conquest elegantly packaged in astronomy,” said Evan.

In the 18th century, German pastor Johann Mohr came to Batavia and established a small observatory to satisfy his hobby of observing eclipses and the movements of Venus. After Mohr’s death there was a two-century silent period in Indonesian astronomy until Bosscha.

Karel A.R. Bosscha was a Dutch tycoon in the Indies’ tea business. Though not a scientist himself, Bosscha’s father and grandfather were physicists. As a student in Delft, Holland, Bosscha founded an amateur astronomy club on campus. He then dropped out and joined his father-in-law Kerkhoven’s tea plantation in West Java, which made them some of the richest men in the Indies.

Before passing away, Bosscha’s father instructed him to use his wealth to contribute for the advancement of science and technology in the Indies. In 1923, Bosscha honoured his father’s wish by establishing Observatorium Bosscha for the Technische Hogeschool van Bandung, ITB’s predecessor.

As a child in grade school, I loved astronomy classes because they seem to come with a sense of mystery and magic. But here in Indonesia, many teachers are afraid of exploring too much astronomy with their classes for fear of “getting it wrong.”

“I cannot tell you how many times we’ve donated telescopes to schools and taught classes how to use them. When I return to visit them the following year, I’d ask ‘Did you have fun stargazing?’ They’d say, ‘We stuffed the telescopes in the closet because they don’t work,'” said Evan. “When I check, the telescopes work just fine, but are perceived otherwise because images appear upside down. But teachers don’t get it and are afraid of making a fool out of themselves before the class.”

Nevertheless, there are still thousands of astronomy enthusiasts all over Indonesia participating in amateur clubs in Jakarta, Bandung, Yogyakarta, Surabaya, Bondowoso and many others. And despite never advertising, Observatorium Bosscha keeps getting a steady flow of visitors who come “for fun”. Some, like myself, make the mistake of coming in the rainy season when nighttime observations are closed. However, many are happy to just stop by for a chat and a tour for now, and return in the dry season (April-October) to look through the majestic Zeiss and Schmidt telescopes at night. In 2012, public nights were fully booked throughout the season.

Evan and Yatny admit that being astronomers in Indonesia is no easy job. In addition to covering research for a 1,9 square-kilometre country, Bosscha astronomers are also expected to participate in public services such as conducting tours for visitors and training in schools throughout the country. There really should be more–at least one for each time zone.

“We’re still waiting for the next ‘Bosscha’ to make it happen,” quipped Yatny.

Public evening observations (Rp10,000 per person) will resume April to October 2013, except during Ramadhan. Schedule TBA.

All visits should be booked in advanced, and appointments met on time.

Out of Eden: Mountain Spirits from the Heart of Timor