You may have seen some of the photographs emerging on the Internet about British photographer, Jimmy Nelson’s new project Before They Pass Away – Nelson visited and photographed 29 secluded tribes to document them before their traditions disappear. Three tribes were from Indonesia – the Dani and Yali of Baliem Valley in the mountains of Central Papua and the Korowai of Southeastern Papua.

I recently witnessed the culture of the Dani and Yali tribes at the Baliem Valley Festival.  Held every August on the mountainside, people from across the valley gathered in traditional clothes and performed dances and mock war re-enactments.

Perhaps the most iconic and essential item of clothing worn by the Dani and Yali men is the koteka or the penis gourd. Now the koteka is commonly seem dangling from walls and has become an exotic souvenir for many tourists who have visited Papua. But what exactly is the koteka and why is it disappearing from Papua’s rich cultural heritage?

In the 1960s, anthropologist Karl Heider spent 27 months conducting field work about the Dugum Dani people of Baliem. His aim for neutral observation brought him into conflict with some Europeans and Americans who had moved into the Grand Valley after 1954 and were trying to change the Dani way of life – they suspected Heider of encouraging warfare aspects to make a film. Warfare between tribes was common and conflicts often arose over property rights (land and pigs) or over women. 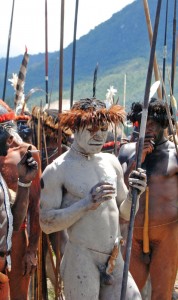 These times were not for the weak-hearted and Michael Rockefeller, who helped record the film Dead Birds about the Dani, was lost in November 1961 during his Asmat expedition – his 40-foot canoe overturned around 12 miles from shore and it is believed that he drowned, although his body was never found. The journalist, Milt Machlin imaginatively speculated that the young Rockefeller heir became victim in a tit-for-tat revenge killing against outsiders, in a region where cannibalism and head-hunting were still practiced.

At times, after reading Heider’s anthropological notes in The Dugum Dani, it felt like I had stumbled into Tolkien’s Middle Earth – the descriptions were truly breathtaking.

Heider explained that every Dani boy over the age of six years old would wear a penis gourd. “Gourds are grown near compounds and are carefully shaped as they grow. The vine is trained up a framework which holds it about 1.5 meters above the ground. If a long straight gourd is desired, a stone weight is tied to the end of the gourd, drawing it out. Later, if a curve or curl is desired, the gourd is bent to the horizontal or turned upside down and lashed to the frame…”

“When a gourd is grown to desired size, its tips are cut off – it is roasted over coals to harden the shell and soften the meat – the meat is gouged out with a bamboo knife, the outer skin is scraped off, and the gourd is carefully wrapped and hung to dry behind the fire of the men’s house.”

“Each man has a wardrobe of several sizes and shapes of gourds which he wears alternately.  It is conceivable that a man picks his gourd according to his mood of the day, but I found no evidence of this.”

“The noisy flicking of the gourd by the fingernail of a forefinger punctuates the more dramatic conversations. This flicking has the same range of meanings as the word naijuk – I am afraid, I am impressed, wow!”

As I hiked through Baliem Valley, wearing boots and a jacket to keep warm, one thing which amazed me was the sight of the older men climbing the steep tracks wearing only a koteka to keep themselves warm! A local policeman who invited me to visit Wamena museum was also puzzled by this riddle and had observed the Dani simply covering their ears, or holding their hands under their armpits where it was warmer – and even if it snowed, they would still wear the koteka!

Although the museum was closed, the policeman allowed us to have a peek. The items were organic and hard to preserve – some were disintegrating. Heider also described elements of the incredibly fragile Dani culture – “A large spider, called muligak, is almost a third domestic animal of the Dani, along with the pig and dog. These spiders are collected in the forest and brought to the compounds, where they construct elaborate webs on frames. The webs, matted into fabric, are used for men’s caps and for magical strips suspended from the throat.” The main forms of decoration were mud, feathers, fur and pig grease, which were all difficult to preserve. I noticed this decoration at the Baliem Valley Festival and observed the bright colours of the Yali – their war dance was full of music, giant guitars and everyone danced.  However, after trekking up into the Dani villages, I soon realized that only older generations wore traditional items such as the koteka. The young and middle-aged wore western clothing and Rastafarian ‘Bob Marley’ culture seemed to have been adopted in Wamena town.

In these high mountainous regions, development is difficult and I saw many Dani climbers hauling up bags of mie to the villages as well as a group who carried bags of cement and a toilet up the steep incline! Tourism has reached the region and is changing the economy of Wamena town – this again has altered the dynamics of Baliem. WWF are currently engaged in an eco-tourism project which will enable the locals to share their knowledge about the nature and utilize this wisdom in order to earn a living.

Yet photographer Jimmy Nelson raises an important point – these cultures are disappearing.  Education, healthcare and development have reached these secluded regions and now villages such as Hitugi in Baliem Valley have their own school, but exposure to the outside world entails change. Perhaps finding a balance between retaining culture and development is key – although this topic is so complex, I wouldn’t like to draw any conclusions. But as long as events such as the Baliem Valley Festival allow communities to congregate, remember their heritage and share it with others, there is hope that the culture will not be forgotten.