A few impossibly narrow, winding roads and sharp turns through a kampung in Pondok Aren, South Tangerang, dodging goats and geese, led us to a big grass field, and as soon as we spotted the pointed tent tops we knew we had reached our destination.

This was the 7th Annual Community Circus of the Red Nose Foundation, or Yayasan Hidung Merah, which is a non-profit arts and education outreach organisation based in Jakarta. All the students of the foundation reside in one of two areas: a fishermen and mussel shell peelers slum in Cilincing, North Jakarta, or the waste-pickers’ slum in Jurangmangu Timur, South Tangerang.

Uplifting tunes blasted through the speakers adding to an infectious atmosphere of happiness as kids from the neighbourhood schools came excitedly running across the field to be part of the audience. There were also plenty of adults and babies taking shelter from the heat of the sun under the tent’s shade, waiting in anticipation for the show to start. 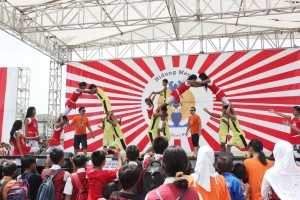 Dan Roberts, the charismatic founder of the Red Nose Foundation, mentioned that the success of the foundation and amount of students was bigger than he had ever expected. Over the course of the weekend, more than 300 youth from several organisations would be showcasing their skills in the circus shows, including 270 students of Red Nose’s circus class. There would be one show held in South Tangerang, and the following day there would be three consecutive shows in North Jakarta, with students between five and 18 years old from the foundation, as well as guest stars from other schools in Jakarta, including Jakarta International School, Global Jaya International School, Bantus Capoeira, and Sekolah Anak Indonesia.

Established in 2008, the foundation works to help disadvantaged children develop their confidence and courage to accomplish their dreams. They are taught circus and performance skills, while also assisting to improve their mathematical, science, reading, and English speaking abilities. As they all come from poor areas of Jakarta, this is their chance to dream big, and all children in the communities are welcome to join, as long as they are able to walk from home to their classes.

Rizal, an 11-year-old performer, joined the circus over a year ago for the excitement it offers and for the opportunity to travel around Indonesia. Some children have been fortunate enough to perform internationally and he hopes that he has the same opportunity in the future. Usually the foundation will hold two performances a month for events across the city, and also an annual production for their communities. They also conduct Red Nose Relief tours to various conflict-ridden and disaster-affected areas across Indonesia.

The kids up on stage were so entertaining to watch, showcasing their circus skills as they juggled, danced, somersaulted, jumped and twirled around the stage. There were also comedy acts which had the young audience in fits of laughter and these are all circus skills that the Red Nose students learn as participants of the foundation’s Arts and Education Outreach program. 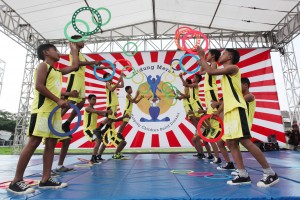 Isabella, a young volunteer performer and teacher from Italy, mentioned the great attitudes of the students of the foundation, in that they never complain about messing up while learning new skills; instead they keep working in order to make great acts for any shows they may have throughout the year.

The performers were so proud and happy that they could be on stage in front of their friends and family and what a wonderful gift for their community, to be entertained and inspired by the wonderful work of the foundation and its students.