It’s hard to imagine Jakarta having any wildlife at all, let alone any birds. The city authorities, after all, do their best to destroy any natural habitat for malls and office blocks, which appeal to the odd sparrow or pigeon, but little else. There is the odd token of greenery but, with all due respect, sticking a few trees under a flyover or along the central reservation of a road filled with black smoke vomiting metro minis and bajaj will not an ecosystem make.

That any wildlife can survive in Jakarta’s concrete jungle is a testament to its resilience and adaptability. To be fair, if birds and reptiles can adapt to earthquakes, floods and volcanoes, I’m sure they can find a way to deal with the cack-handed politicians and developers.

Amid all the bad news, it will then come as a surprise to many that some keen birdwatchers, known as twitchers, make Jakarta a must-visit place when it comes to ticking birds off their voluminous lists. And one of the most popular spots lies under the flight path of Soekarno Hatta international airport, hemmed in by some of the worst designed houses you could hope to find north of Pondok Indah. Muara Angke is a sliver of mangrove along the west bank of the Angke River, home to a reported 91 different species of bird, but there is one particular species that has twitchers booking flights for Jakarta. The Sunda Coucal is endemic to Java, but has only ever been recorded at a number of spots, Muara Angke being the most accessible sight to catch a glimpse of this extremely rare bird.

Officially you need a permit to visit Muara Angke, but that is erratically enforced. Sometimes you may be charged admission, sometimes not. There is a raised boardwalk which takes visitors through mangroves and lakes, affording an idea of what this patch of land may have looked like before men with bulldozers arrived. It is also possible to hire a boat and head upriver to the Bay of Jakarta and some of the islands, especially Pulau Rumbut, which are well known for their variety of bird life.

The idea that Senayan can host any kind of wildlife beyond crazed metro mini drivers beggars belief, but keen ornithologists have spied the colourful Red Breasted Parakeet flitting among the trees around the Gelora Bung Karno Stadium, oblivious to the crowds and vendors at ground level. There are also hundreds of swifts as well as Sooty Headed Bulbuls to be seen by the careful observer. Even at Merdeka Square, home to the National Monument (Monas), avid birdwatchers have spied more than two dozen species, including various bulbuls and a number of small but colourful sun birds.

Perhaps less well-known is the city forest along the banks of the Pesanggrahan in West Jakarta. This 15-hectare conservation site is home to a number of riverine birds, including kingfishers, as well as frogs and lizards. Beyond Muara Angke, however, Jakarta can only ever be a tease for the serious bird watcher. Further afield lies Pulau Dua, north of Serang off the Jakarta-Merak toll; an important stop off for migrating birds, Bogor’s Botanical Gardens, Gunung Gede, Carita and Ujung Kulon National Park. 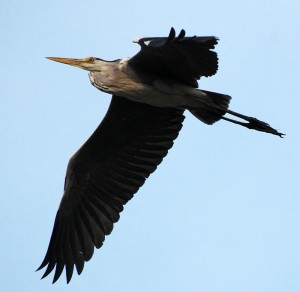 The best time to spot birds beyond the usual pigeons and sparrows is early morning. They are not stupid animals; they prefer to get their hard work done in the coolest time of the day. They also require patience. Unlike in zoos, where animals are displayed for the entertainment of humans, in the wild they are going about their daily business. And life has taught them to be wary. Many species use the undergrowth or trees for protection; while out seeking food they are, in turn, potential prey for others.

Patience is the biggest virtue a twitcher needs. In the sites mentioned in this piece it is all too easy to hear or see evidence of birds around you. It can be in the bird song for example, the rustle of branches, or a flash of colour as one flies to a safer roost. Keen bird watchers are quite happy to stand around for ages waiting to see just one bird. They try as hard as possible to blend into their surroundings, hence the purpose-built hides at places like Muara Angke, or observation posts at Pulau Dua.

Birdwatching can take you to places you would never normally get to and meet people you never thought existed. Watch the local news or read the local magazines and papers and it is easy to come to the conclusion no one really cares about the environment beyond a few school children doing their obligatory project on global warming, while their driver waits outside with the engine running. But don some binoculars, get out and about early in the morning and you will bump into a new species; people who do care about their environment and the animals they share it with, people trying to make a difference in front of what may seem to be insurmountable odds.

A Field Guide to the Birds of Borneo, Sumatra, Java and Bali – John MacKinnon, Karen Phillips