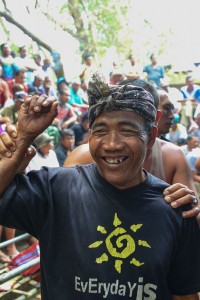 Jaga, or Mr. Jaga as he likes to be referred to, is a bit of a character. He hails from the village of Petemon in Pejeng, about 10 minutes by motorbike from the centre of Ubud.

I met Jaga when I attended my first cockfight recently. He was busy surveying the rather chaotic scene of men (no woman are allowed to attend cock fights) placing their hard earned rupiah on the cock of their choice. There were many gambling opportunities on this morning, as the fights only last for about one minute and take place one after another. Cockfights are only permitted at ritual ceremonies and are designed to purify and appease the spirits of the earth.

Jaga’s main job is to breed cocks for fighting. He has been involved in this profession since he was twenty-years-old and was taught by his father in the village. Jaga has six children ranging in age from three to 35 years from three different wives, so I guess it’s no wonder he is always smiling! He typically sells his cocks for between Rp.150- 200,000 but sometimes a good cock can fetch up to one million Rupiah. Like breeding racehorses, Jaga studies the physical body of the cock at a young age and makes a decision as to how it will perform as a fighter. With his discerning skills, he purchases the ones that he feels will succeed in fighting and then he looks after them for one year until they are ready to take to the ring. 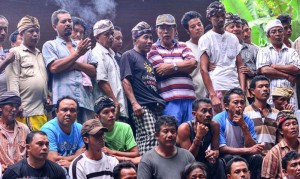 His goal is to sell five cocks a month, although it is a competitive business and does not pay enough to support his five younger children, so he helps out on cock fighting days with various activities, such as getting the cocks ready for fighting and plucking the feathers from the losers so they can be sold for eating.

If he had the money, he would buy merchandise to sell at cock fights, but he can never seem to raise the two million rupiah required to purchase what he needs.

Despite his financial struggles, Jaga is a very happy man, always laughing and joking. His positive spirit adds to the village atmosphere and he is clearly a very popular man.