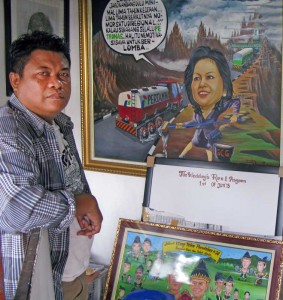 In the shadow of Pasar Baru in Central Jakarta sits the coup de grace of every departing expat—Jalan Gedung Kesenian—and its row of caricature artists.

If you’ve never attended a going-away party and seen the work of Kang Edi and his counterparts, you’re not a real expat. But what made Edi, a 48-year-old father of three leave his job at a bank ten years ago and take up the brushes full-time?

Freedom, of course. There are no rules. No set hours. He’s his own man, free to work or play chess. His brow furors if you ask him about his monthly sales quota.

Edi enjoys the outdoors. He likes being a man of the people. Jalan Gedung Kesenian boasts upwards of 30 caricature artists, each one tempting customers with toothy renditions of Barrack Obama, flattering interpretations of Paris Hilton and a handful of artists riding out their 15 minutes of fame. Anyone with a sliver of talent has considered it—taking a leap of faith, living their passion, being their 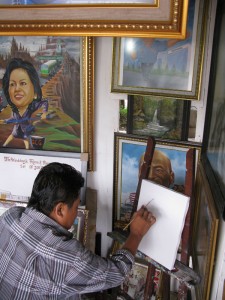 own boss—but Edi actually did it. He left it all behind for the one-on-one interaction he enjoys when people approach him with a headshot and a story. Edi gets to create, mixing his own talents and a little bit of background and ending up a few days later with the perfect gift.

How’s he managing? Leaving an easygoing job in an air-conditioned bank isn’t easy. You have to believe in yourself. But Edi is doing just fine, biding his time between serious portraits, suggestive caricatures and classy calligraphy meant for weddings and selling for Rp. 1.5 million and beyond, he has no regrets. And while USD 150 might seem steep for a going away present, Edi invites you to bargain. Half the fun of making a purchase on Jalan Kesesian is the interaction. If you’re not looking to bargain over a cup of coffee, bargain over the roar of the passing bajajs and swarming buzz of the motorbikes along Jalan Kesesian.