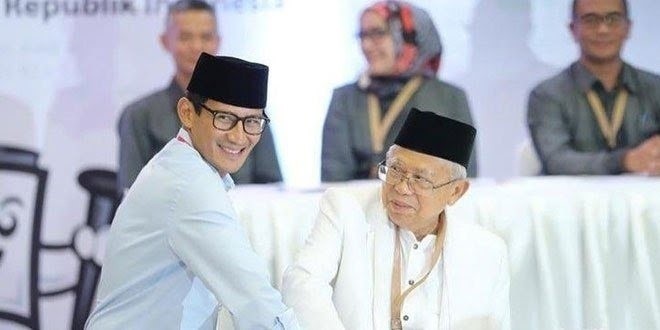 The country is set to witness a face-off between Muslim cleric K.H. Ma’ruf Amin and businessman Sandiaga Uno. The third presidential election debate will be the first and only to feature the two vice-presidential candidates.

The two running mates to the presidential candidates could not be more different. The Muslim cleric, 76, faces a challenging task to convince voters of his capabilities, visions, and future programmes as compared to Sandiaga, who is 49 and considered to be more appealing to millenials.

Both campaign teams have talked of their intense preparations for the upcoming debate. Erick Thohir, Chairman of the Jokowi-Ma’ruf campaign team, commented that Ma’ruf’s main concern for the debate is to adapt his answers into short and concise statements, in accordance with the debate’s format. “In the debate, answers will be limited to one to three minutes long, unlike in a speech,” Erick said. Erick also added that the debate offers Ma’ruf an amazing opportunity to display his expertise in sharia-based economics and present himself as a leader of the moderate Muslim world.

His rival Sandiaga Uno was the deputy governor of Jakarta from 2017 to 2018. The businessman-turned-politician gave up his seat to enter into the upcoming election. Prabowo’s camp often criticise the current government for lack of employment opportunities and the presence of foreign workers. Prabowo and Sandiaga promise to open more opportunities for Indonesia in terms of the economy and labour. “Sandiaga will address how to create more employment opportunities,” Prabowo-Sandiaga campaign team spokesman Andre Rosiade stated. Andre confirmed that Sandiaga had also participated in a series of debate simulations and workshops to sharpen his knowledge of the topics up for debate.

Sunday’s face-off will also bring up issues of healthcare and the deficit in the Social Security Agency (BPJS).

Six Tips for Expats Travelling to Remote Areas of Indonesia