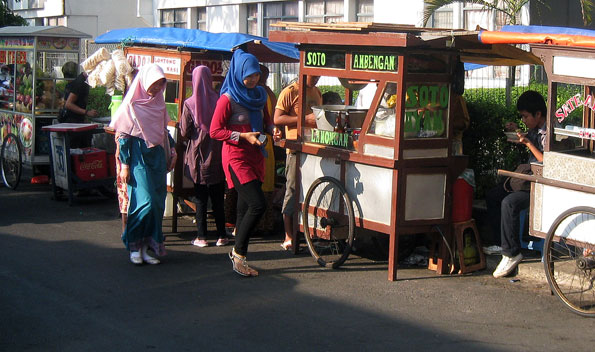 A spate of vomiting an dizzines ended a community party in Suberingin village, South Sumatra, on Monday, May 15, with 13 children suffering food poison after allegedly consuming meatballs from a street food cart.

The incident occurred during a party at a wedding venue which had attracted street snack peddlers. Children and teenagers swarmed a grilled meatball seller and shortly after began feeling dizzy and vomiting, ending the party.

Sutar, father of one victim, said his child had been complaining of a stomach ache and feeling dizzy after eating the food.

“We asked the head of village to prioritize and focus on handling the poisoning issue and set aside the party,” he said.

It was initially difficult to determine the cause of widespread poisoning, Village Head Wilman Kamili said.

Fortunately, all victims are recovering well.

Food poisoning via street food is not uncommon in Indonesia, with poor hygiene and preservatives not meant for human consumption largely to blame.

While Indonesia has some of the most delicious street food in the world, it is important to be vigilant. Consumers are advised to be cautious in selecting what to eat and be sure to keep hands and utensils clean.