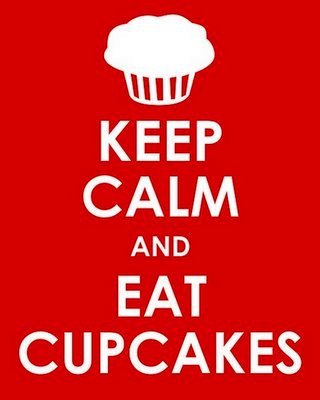 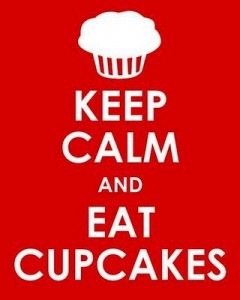 One helpfully gave me a great opening for an article: “At least once a year family, friends, and strangers converse about their journey, admit shortcomings, and look for ways to improve over the next 365 days. In grocery lines, restaurants, International Terminals, even hospitals, once a year NYR is an ‘ice breaker’ we want to know if others like ourselves plan on being better. Why?”  It is a good conversation opener. I think sometimes the interrogator is genuinely interested, and that it’s also probably good in general to give voice to your goals – a sort of Coelho-like action, to allow the universe to conspire to help you find success.

Some people had the usual resolutions: losing weight or reducing debt, while others had more esoteric objectives: self-mastery, and being more grateful and mindful.

Some had prescriptions for resolution-setting, which included setting “broad goals that can be achieved in a number of different ways.” That’s definitely my style. Another preferred was “resolutions that involve doing something as opposed to not doing something. Good resolution: travel more.  Bad resolution: eat less carbs.” Sounds good. One friend usually doesn’t make resolutions, but said she might this year; that it could be fun to make resolutions with family and friends.  But, she advised, “If major changes are needed, I don’t think people should put them off until January 1st.” True dat. 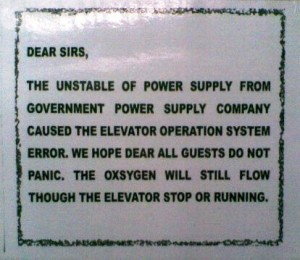 One friend sent me a photo of a sign in an elevator that advises passengers that the electricity supply is unreliable, and not to panic should they get unexpectedly stuck. The sign attempts to assure travellers that the “oxsygen” will still flow though (whether?) the “elevator stop or running.” Not to panic when things go wrong, as they inevitably do in life from time to time and, more frequently, in a country with limited infrastructure, is a very worthy resolution.

I do rather like that iconic sign from wartime England, which advises to “Keep Calm and Carry On,” and the more modern variations, such as “Keep Calm and Eat a Cupcake.”

For an expat, the advice is apt.

Living overseas presents many opportunities for personal growth, the essence of New Year’s resolutions. It is sometimes easy to forget what a privilege it is to live in another country, especially on a comfortable expat package, when confronted from time to time with the annoyances of living in a place where things are sometimes done differently.

So, in addition to setting some professional goals for myself for 2012, I’ll continue to work on a personal goal that I set when I moved to Jakarta just over one year ago: when I get irritated about something, I’ll try and keep calm and be grateful.

When my cook says there’s no more canned pumpkin in the store, when fresh, real pumpkins abound locally, I’ll calmly remind him that we actually prefer to use fresh ingredients, and I’ll be grateful that we have someone to prepare food for us.

When the restaurant server announces the arrival of my beverage or wants to remove an empty plate from the table and thinks it’s better to interrupt my conversation than to do his job quietly, I’ll calmly acknowledge his presence and be grateful that I can go out to eat.

When the airline inexplicably keeps us waiting on the tarmac in a hot plane for over an hour, only to bring us back to the gate to wait longer before cancelling our flight, I’ll be grateful for an unplanned additional evening in Bali, and for the opportunity to travel anywhere.

The fact is fortune has favoured us expats. The stakes aren’t nearly as high for us as they are for nearly half of Indonesia’s population, who survives on less than Rp. 20,000 (roughly the equivalent to $2.20) per day.

Yes, life is pretty good as an expat.  I’ll continue to try to keep that in mind when things go wrong.