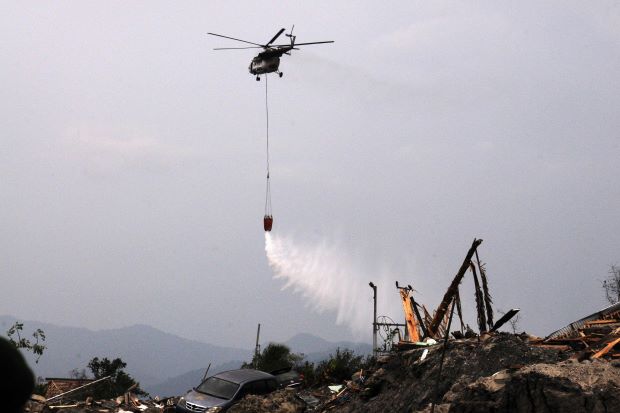 Helicopters are dropping disinfectant on neighbourhoods in the earthquake- and tsunami-stricken city of Palu to reduce disease risks from the thousands of victims believed buried in obliterated communities, Indonesia’s disaster agency said Thursday.

The agency said that 430 hectares of land and nearly 3,500 homes succumbed to liquefaction in Central Sulawesi when the September 28 earthquake turned soft soil to mud.

Spokesman Sutopo Purwo Nugroho said in a statement the disinfectant is necessary for three devastated neighbourhoods because of the large number of victims not recovered by the search and rescue effort that ended on October 12.

“Bombing and spraying of disinfectants is an effort to anticipate the spread of diseases through vectors such as flies, cockroaches, or mice,” he said.

Some ground spraying was also carried out but much of the land is too unstable to do that comprehensively.

Officials say the destroyed Palu neighbourhoods of Balaroa and Petobo, and Jono Oge in neighboring Sigi district, cannot be redeveloped. Balaroa and Petobo will be turned into green spaces with monuments to those who perished.

Ahmad Yurianto, head of the Ministry of Health’s crisis center, said groundwater needs to be checked regularly for contamination and drainage established to collect rainwater before it enters the city’s river.

The Indonesian government is considering a Rp6 trillion (US$394 million) plan to build “New Palu City” and the World Bank has said it can provide the country up to $1 billion in loans for reconstruction and improving disaster preparedness.

“It is impossible to rebuild homes in the original places,” public works and housing minister Basoeki Hadimoeljono told reporters earlier this week.

The Indonesian Red Cross said Thursday there is a massive effort underway to distribute 215 metric tons of relief such as tarpaulins, clean drinking water and other items to tens of thousands of displaced people before monsoon rains set in.