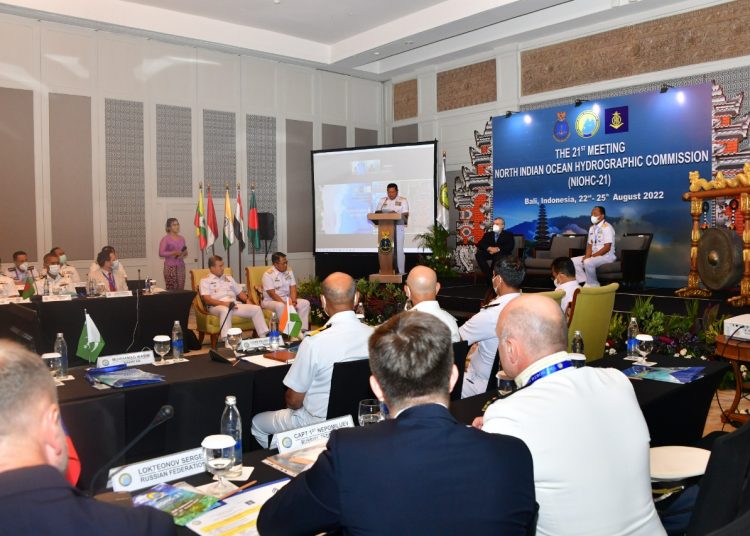 The 16 countries participating in the meeting were:

With Indonesia as the host.

The seminar was held with the theme of Raising Awareness of Hydrography and was attended by participants from NIOHC member countries, both face-to-face and online.

“Today, we are holding the 21st meeting. We are participating in three of the 16 regions for the world hydrographic organisation. We are following this for the North Indies, which was attended by 16 countries,” said the Chief of Naval Staff, Admiral of the Indonesian National Army, Yudo Margono on Tuesday 23rd August 2022.

According to him, this kind of meeting is nothing new in the world of hydro-oceanography.

Margono explained that the Indonesian Navy, apart from having an integrated fleet weapon system consisting of warships, marines and bases, also has a Hydro-oceanography Centre.

For him, the existence of this hydrography is very important because Indonesia is an archipelago. In the Indonesian archipelagic sea lanes, it is also required that the state be responsible for the security of navigation.

“Security of navigation without hydro-oceanography is impossible. For making maps for international shipping, hydrography plays a role,” he explained.

Admiral Margono said that in this hydro-oceanographic meeting, the members intended to share their vision and also find natural resources, especially in the sea. Because the area is vast, it was attended by several countries so, of course, it needs cooperation.

The existence of maps, both national and international, requires coordination between NIOHC members. That way, the making of maps is done according to international standards.

“The local department has been recognised internationally and is used by world seafarers. If foreign ships want to go to Indonesia, if they don’t use a map of Indonesia, it is their choice,” he explained.

Poor Quality Fuels in Indonesia may cause Pneumonia