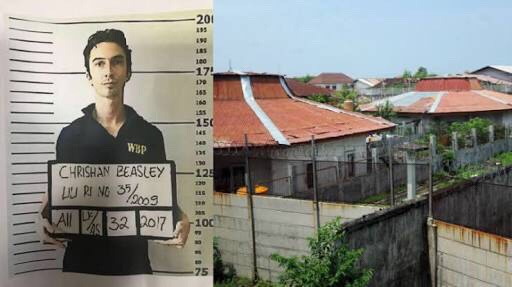 An American man arrested on a drug charge has managed to escape a prison in Bali and is now being hunted by the local police, who are also looking into the possibility of guards who played a role in his escape.

The prisoner, named Chrishan Beasley, sawed through steel bars above his cell with a hacksaw before shimmying down a wall using a rope, according to accounts from Kerobokan prison head Tonny Nainggolan , as reported by AP and published by the Washington Post.

It is also understood that another American inmate, Paul Anthony Hoffman, 57, had also attempted to escape but was caught before he managed to make it out of the prison.

The authorities are conducting an investigation looking into how the escape went undetected and whether or not the Kerobokan prison guard had helped facilitate the escape of the American.

Kerobokan prison is known to be overcrowded and understaffed. According to the Law and Human Rights Ministry, the prison was built to hold around 300 people, but has nearly 1,600 inmates. In June four foreign prisoners were reported to have escaped through a drainage tunnel.

A former Kerobokan inmate from New Zealand, Paul Conibeer, who authored “I Survived Kerobokan” said the prison was “packed” and had corrupt guards who allowed drug use and violence in the cells.

Chrishan Beasley was arrested in August after he was found to be in possession of a package containing 5.7 grams of hashish.