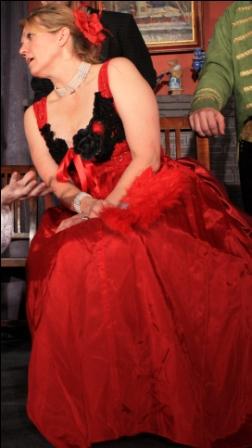 Meet Sharon Sobotka. The extrovert who lives life to the full in Jakarta.

You have a very interesting last name – where does it come from?

Thank you. I’m Polish American. My parents were first generation which makes me second generation Polish.

And where in the States are you from?

I’m a Chicago girl, born and bred. But I’ve lived in Moscow where we relocated for my husband’s job and have been in Jakarta for two and a half years now.

What does your husband do for work?

Sounds very James Bond. And how long have you been married?

That is indeed. Do you have children?

So how’ve you found living in Jakarta?

This city is daunting when you first arrive and it’s very much still the “Wild West”. The streets not only have thousands of cars and thousands of motorbikes and people trying to cross everywhere, but you also have guys on pushcarts thrown in! Luckily I’m a city girl so it didn’t phase me that much. You have to find your own rhythm or you miss out on the fun and on meeting all the interesting people from all over the world with fascinating backgrounds who live here.

How did you manage to find your rhythm?

Through Jakarta Players, which is a community theatre group in English that gives all of its proceeds to Habitat for Humanity, Indonesia. This group has an age range of 16 to 60 with members who come from creative and interesting backgrounds, from documentary-makers to people working for USAID. From here I joined other organisations that put on events and now I volunteer at the Highland Gathering, Scotland in Concert, Taste of Jakarta and many more. Groups are very accepting in Jakarta if you have the energy and the will to get something done.

Now I’m the President, I act, produce, direct and sell tickets because true community theatre allows you to advance quickly in the organisation!

So Madame President, what’s the latest show you produced?

Last December I co-directed The Real Inspector Hound which I can only describe as a murder mystery farce. I directed this with an Englishman who kept the play true to its British roots. It was a great show that kept you guessing while it kept you in stitches!

And you used to be on the board of the American Women’s Association. What was that like?

Yes, I did and it was a lot of fun. We used to organise a lot of fundraisers and shopping bazaars for good causes. I only left the board because I started working for the American Embassy.

I see. And what do you do at the Embassy?

I work as an Office Management Assistant. Basically at the moment I’m facilitating the construction of the new embassy building which is going to be beautiful.

So you have a job, two kids, a husband that travels a lot, you’re on the board of a community theatre group, you volunteer at all kinds of charity events – anything else?

Well, I also DJ at private charity parties! My stage name is Shazzie Zee! But don’t worry DJs, you don’t have to worry about me taking your gigs away! I’m also part of a book group, which are fantastic by the way, especially if you happen to be a shy person.

Which you definitely aren’t! What advice can you give to expat wives new to Jakarta?

Join a group because the people are very accepting and find one that nurtures your interests and makes you feel yourself so that you can then go out and be adventurous. Don’t sit at home and hope something will happen. Get on the other side of the wall! And travel Indonesia’s islands because Jakarta is not Indonesia.

Two great publications I would recommend are by the American Women’s Association for when you first get here; “Introducing Jakarta”, which is full of all that basic information that gives you comfort and “Jakarta’s Shopping Guide”, which shows you where you can get just about everything. Embassies also have Community Liaison Officers who are a wealth of information.

So Sharon, are you ever going to slow down?

Slow down? Why would I want to do that?

Great answer. To get in touch with Sharon, email her at [email protected]