Federico is a Stockholm-born artist, who grew up in Italy and now lives in Bali. He speaks to us on art, love, and life.

You have been based in Bali for the last seven years. What is your background?

I was born in Stockholm in 1974. My family moved to Italy when I was 13 in 1987. I attended the International School of Art in Riccione, Italy. After art school, I never really thought about being an artist although painting was always my passion. I went into the fashion industry in Milano and worked in haute couture with the house of Lorenzo Riva. I worked the shows in Paris, Rome, and Prêt-a-Porter in Milan. It was a great education but I understood it was not my thing!

My father lived in Singapore at the time, so I went there as a fashion stylist and opened my own company. I set up shoots for Marie Clare and other top clientele. I started to come to Bali every month and I was inspired by the Balinese. It was a simpler time in Bali and I was deeply influenced by the simplicity of the Balinese people’s lives and the dignity with which they carried themselves. They did not have much materially, yet lived such rich lives. The people here were proud and happy with so little. I started to look at my life and look within.

Inspired, I went back to Singapore and painted more than twenty pieces. Friends loved them but I was still shy about my work. I painted murals and eventually was asked to show my works at the opening of a restaurant. The Italian Ambassador and many other dignitaries were present and I sold out. Galleries approached me and soon I had a one-year contract with a gallery and my paintings went up in value. 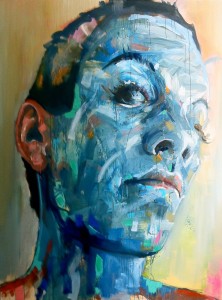 Which of your international exhibits has been the most important to date?

The next one! As an artist I am always looking forward to the next painting. When an artwork is finished, it is done and I move on. But I must say the Biennial of Venice was a great honour.

The Dalai Lama recently expressed it is up to artists and musicians to reveal the light and inner truths to people so consciousness may be changed. What is your response to that?

I agree that the arts may give people experiences they otherwise would not have had. I do believe the artist has a responsibility to be true with his creativity. A work may affect different people in different ways, but it makes them look at themselves and their relationship with the world around them. The arts are so important in society and in the end it is their retrospective qualities which make them powerful. Albert Einstein once said that imagination is more important than knowledge generally, for knowledge is limited to all we now know and understand, while imagination embraces the entire world, and all there will be to know and understand. People have to do things for love, and pure passion, not profit. If you are pure and honest, it comes back to you. The most important part of my art is the process rather than the end product.

Is everyone an artist at birth?

Yes, but few people make it through childhood with their creativity intact. It is educated and programmed out of us in the first decade of our lives. But we all have that creative energy; a bit of ‘God’ within us which we all have the potential to express through creativity. In education, we are taught to only use six senses; to limit our experience and focus on making money in an unsustainable way in contrast to the sustainable lifestyles we can achieve by being more creative. We certainly have all the tools and technology to achieve that. It is one of the things which impressed me so much in the early years here in Bali. Everyone was involved in some sort of creativity; making their own offerings every day and offering them up to the universe – everything was handmade. In the West we use art as a therapy because it is so lacking in our lives that exposure to it heals people of many illnesses, both physical and psychological. 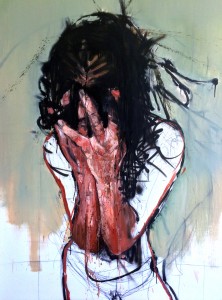 What do you most love painting?

People – they are so complicated, with so much potential and so many layers. In my earlier works, I painted only from my imagination. Now I also incorporate my photography to catch certain images, such as a certain person, a face, an emotion. I am a filter of what I see. Reality is a central reference from which I work to express human feelings and emotions in today’s world.

How do you feel about all the changes we see here?

Bali is an example of the entire world – like evolution, bad or good marches on. I do not complain or compare to the past. The whole world has been changing exponentially and all the modern ills we see so clearly here exist all over the world. The plastic and garbage is in our face rather than trawled out to sea and creating an island bigger than Australia – and that is just in the Pacific!

We have gained many good things; technology and healthy food. I would like to see Bali never compromise its beautiful culture, which embraces the beauty and the strangeness of life simultaneously. What will the next generation do here? It is sad to see the young people follow western trends so closely and rejecting their own culture. But I also see young Indonesians embracing a new collective culture, using the new technologies and incorporating traditional ways to achieve a better world.

It is a shame that huge parts of the culture are gone forever, such as the subak system of water which worked so well for so long. There is a rice field behind me where the farmer was forced to stop planting because there is no more water from the old system. This is a country of such diverse and rich cultures. My hope is that they will learn from the mistakes of the West and make that leap into the future with its possibilities of sustainability and clean, free energy and water. We have to have dreams!