East Bali Cashews (EBC) is stirring things up in today’s business world. From the birth of the enterprise just three years ago, the mission of EBC has been to create lasting change – and it is doing just that. We meet EBC’s American cliff-diving CEO and Founder Aaron Fishman and learn more about the exciting story behind his social enterprise.

Located in the Karangasem region of Bali, EBC has grown at an astounding rate, and is now exporting cashews to seven countries and counting. As the region’s largest employer, EBC provides over 350 jobs as well as various community development initiatives dedicated to improving the lives of the people of Ban Village. As EBC’s founder and CEO, Aaron is dedicated to ensuring that the company remains true to its mission of social, economic, and environmental sustainability.

How it all began

What made a young American uproot his entire life in his home country and move to Bali to start a business processing and selling cashews? The answer lies in two of Aaron’s greatest interests: helping people and food. Aaron has always been a ‘foodie’; whether cooking in a French restaurant in college, producing chocolate in France, owning a brownie company, or running a commercial kitchen.

Surprisingly enough, although Aaron has always had an entrepreneurial spirit, the decision to come to Bali was, as he puts it, “…totally random. My friend told me about a non-profit that was sending a medical mission trip to Bali and I decided to go.” Aaron had never considered travelling to Bali before then and had no idea what to expect once he got there. Little did he know, it was a decision that would completely change not only his life, but the lives of hundreds of Balinese.

In East Bali, he felt worlds away from the crowded, noisy, touristy south. He was faced with the extreme poverty of those living off of this unforgiving land. He realized that though foreign aid provided through non-profit organizations was helpful, what this village really needed was a sustainable economic boost.

Aaron arrived in Bali at the height of the cashew season and learned from the local farmers that all the cashews would be shipped to Vietnam and India for processing. At that time, this practice, as well as other inefficiencies in the system, produced high environmental and financial costs while lowering cashew quality. Always thinking like an entrepreneur, Aaron had the idea to start a factory right there in Bali. He believed this was the way to provide the community with desperately needed jobs and create the sustainable development that this region lacked. He decided that he would create a self-sustaining business, one that would be profitable and beneficial to the community.

When starting the business there was no ‘grand plan’. He took things step by step and learned as he went, receiving the guidance and advice of many knowledgeable people. “My goal was to improve the community and to make a profit, and we have done both,” he says.

To undergo such a massive undertaking, he knew he had to figure out both the operational and the business side of things. Aaron described how he navigated through this unfamiliar territory. “On the operational side you can learn by doing. As for the business side, I had a local partner, Rezal, who gave me the know-how to begin a business here [in Indonesia]. Rezal and I started talking about it in February of 2012 and all the investment was raised by August of that year. We started production in November after raising just US$137,000.”

Aaron has had many surprises along the way. “I think the biggest surprise I had was how amazing my team has been and how many people have been supportive of us. We had to be able to run a complex operation in the middle of a very remote area. The team took it on full-steam and successfully executed it.”

When visiting the factory in Karangasem, one can immediately feel the positive energy and community spirit. However, Aaron notes how difficult it has been to bring the story of EBC to the consumer because of how far removed the two can be, especially now with EBC expanding into so many new and distant markets.

It is still difficult for Aaron to believe how much the company was able to do in the beginning with so little to start with. Luckily, his inexperience at that time was what allowed him to take a leap into the deep end, unphased by the very real possibility of failure that had befallen many others who attempted the same feat.

“If you would have told me that after just three rounds of capital we would make it, I would never have believed you. Starting the company in retrospect with US$100,000 is ridiculous. That was a terrible idea! It worked but I certainly wouldn’t do it again. I would start it much bigger, much better financed.” 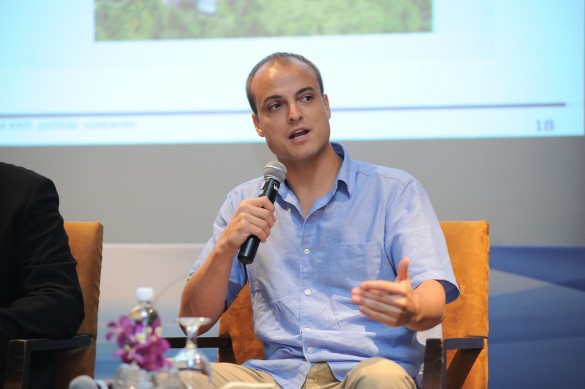 Where does Aaron see himself in five years? “Probably sitting here, at this desk, with two factories, a plantation, an ecolodge, and much more advanced distribution so that we can reach all people who are willing to try us outside of Indonesia,” he says.

When asked about the possibility of new products Aaron answered, “I want a better product line that includes more cashew flavours, cereals, snack mixes, cashew popcorn, etc. If anything can be made with cashews, we will make it. I’m also working on a low-cost brand.”

It is very clear that with Aaron at the head of the company, EBC will continue to surprise and satisfy taste buds the world over. There is much in store for the company, as Aaron noted, “Things are going well but we have so much more to do. This is just the beginning.”

Through hard work, creativity, and a whole lot of cashews, Aaron has spearheaded a business improving the lives of everyone involved; a true model for the future.

Rocking New Cocktails During the Month of December