Meet Leonard Lueras. The surfing ‘newspaper man’ who washed up on Bali’s shores in the 1970s and fell in love with Gods’ country. 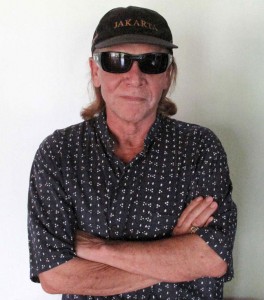 Aloha Leonard! Can you firstly tell me where you’re from?

I was born into a hispanic-latino family in the very old American city of Albuquerque, Nuevo Mejico (New Mexico) in the United States of America but in later years I lived a lot of my childhood and early teens in California and Hawaii. I attended and graduated from a small private university in San Diego, California, but the longest part of my American life – about 23 years – was spent living and working in the State of Hawaii. For most of those years I was a reporter for The Honolulu Advertiser, the major newspaper in Hawaii (and the oldest American newspaper west of the American Rocky Mountains).

How long have you been living on Bali and how did you wash up on these shores?

I first came to Bali during the late summer of 1970. At that time I was an avid surfer and so I came to this island to look for what I had been told were quite good surfing waves.

Just before coming here – then by Pan American Airways and Thai International flights (from Saigon to Bangkok and Jakarta) — and later overland by train and bus to Jogjakarta and Surabaya to Bali — I had been temporarily based in Saigon in South Vietnam as a war reporter for my Honolulu newspaper which had established one of the earliest Vietnam War news bureaus in Saigon. After writing and photographing war in Vietnam for a while I had time for a break/holiday so (based on friends’ tips) I flew to Bali with a surfboard to check out waveriding conditions here. Once I got here I did indeed find – on this then remote and little-visited island – a lot of really good surfing situations and a remarkably alive and living culture.

At that time I quickly became quite fond of the island of Bali, so during later years I would return to Bali every time I had a chance to break away from Hawaii and other places to hang out in “Gods’ Country”.

It was always fun to be here as a visitor/tourist, but a really great break came in late 1983/early 1984 when a Singapore-based publishing house called Times Editions commissioned me to write a book about the island of Bali. That “coffee table book” – Bali, The Ultimate Island – is still in print but in the initial stages of writing it this writing project not only allowed me to move to Bali, and to actually make a living while being here, but, more importantly, it paid for me to spend more than a year-and-a-half working on a beautiful and exotic island which already had me in its spell.

Your villa compound here in Sanur is beautiful and I hear you have a well-known photographer moving into the neighbourhood – how did that come about?

Thanks for the kampung compliment. Yes, our compound is a beautiful place – located in an area of Sanur that used to be a bit desolate and non-inhabited by foreigners. These days, however, our neighbourhood has become a very trendy area populated by many trendy people who live in eccentric villas. Our particular compound – Taman Mertasari – includes me and two other publishers (one English, one French), a garment designer/producer (American), me (yet another American) and, yes, an internationally-renowned photographer. The photographer, who just recently joined our compound, is a longtime friend named Sebastiao Salgado. He is a remarkable Brazilian gentleman who is based in Paris and we are delighted to have him, his eyes, and his wife Lelia as new members of Taman Mertasari.

You’re known (among other things) for being a writer, photographer and a publisher – which of these three do you want people to know you best for and why?

Probably the best way to describe me would be to call me a “media freak”, but the description I most prefer for myself is to be referred to as a “newspaperman”. My early career training and subsequent life’s work was largely spent in “good old days” newspapering when covering news for a daily newspaper was probably the most fun and interesting job in the world. That profession took me all over Hawaii and the world for many fascinating years but I had to give up my roving journalistic career in the early 1980s when I became a single parent and had to devote a large amount of my time to raising two children by myself. It was at that time that I began seriously writing books instead of filing day-to-day correspondent dispatches.

You’re quite the dude and the shades are a part of your persona – has this always been the case? What brand do you wear?

I have always said that you can never have too many pairs of sunglasses, baseball caps or cool tropical shirts – and especially so in the tropics. As my Hawaiian friends used to say, “I wanna be comfortable, not hot, brah”. I’ve liked all sorts of sunglasses over the years, but in recent years I have become a devoted Oakley sunglasses fan (something to do with the look and lenses).

Where did your love for photography stem from?

I have been quite avidly involved in photography since high school days in California, but photography later became a very important part of my life once I started working as an international newspaper correspondent in the early 1970s. In those days it was rare that a newspaper could afford to send both a reporter and a photographer on an assignment together so I would have to personally take photographs to accompany my writings. I didn’t mind doing that, though, because I have always enjoyed shooting pictures. I find writing to be hard and disciplined work but photography has always been for me a pleasant diversion and a form of visual meditation.

What’s been the most memorable photo you’ve taken in Bali?

Wow, that’s a difficult question to answer because Bali is so rich in imagery, whether regarding people, places or things. But some of the most arresting images I recall shooting are scenes at grand Balinese ceremonies back in the 1970s and early 1980s. Then there was still a feeling of “Old Bali” that I don’t see too often these days.

What camera do you work with these days?

In the good old film days I mostly used Leica rangefinder cameras, but these days – given “the digital revolution” and the recent “death of film” – I use Canon digital cameras. I am particularly fond of a small Canon digital camera I have called the G-10.

Yikes, during the past year-and-a-half I have released three new books – one a limited edition book about U.S. President Barack Obama’s childhood in Indonesia and Hawaii, one about Batam and the Riau Islands, and another about those spacey Balinese “Day of Silence” effigies called ogoh-ogoh. The ogoh-ogoh book is one of the largest “coffee table books” ever produced about a Balinese subject and is filled with a lot of stunning and lurid images of ogoh-ogoh taken by some 33 Balinese and foreign photographers.

Can you tell me a bit about the Obama album you created especially for President Obama’s visit to Indonesia last year? And why were you asked to make that?

That book, made for the Obama family (Barack, Michelle, Malia and Sasha Obama), was commissioned by President Obama’s Javanese relatives in Indonesia. They wanted to do something very personal and special to honour the occasion of Obama’s first formal State Visit to Indonesia. Being an American and mostly from Hawaii (Obama’s birthplace, and the birthplace of my two children) I was pleased and proud to do something like that for my remarkable president. This limited edition album-book includes very rare and never before published photographs of Obama as a young child in Indonesia and Hawaii, and recently the U.S. Library of Congress even procured a copy to place into their rare books collection.

You have a very unique car – can you tell me more about it? What inspired you to modify it with wood? And what do people’s expressions say as you drive by them in it?

My car is a 1970 long wheel-base Land Rover that has been painted English pillar box red and has been beautifully trimmed by Indonesian carpenters-craftsmen with local teak wood. It is what 1960s surfers used to call a “woodie”, meaning a vintage vehicle trimmed in wood. I have driven it three times from Bali to Jakarta and back and people really seem to like it because they always want to take photographs of it and are always asking me if I would like to sell it to them. I have a lot of fun with this car and it (“The Red Rover”) has become more of a friend to me than my car.

Sounds like a lot of fun. So as an expat who’s lived in Bali for a while now, how do you feel about the rapid changes that are happening on the island in terms of development?

Some things are for the better and some things are for the worse. The first few times I came to Bali there was no electricity, no telephones and mostly funky pot-holed roads. There were also very few places where you could get a decent meal, but despite those drawbacks Bali was extremely charming. I miss those days – when you could enjoy a meal of two lobsters in Kuta for about one dollar – but I also enjoy many of the things that “progress” has brought to the island. “Progress” can be a drag but it is also fun these days to have Internet access and to have international newspapers and croissants delivered to my home in the morning.

What can expats and visitors do on the island to live harmoniously with its culture, its people and its nature?

Do what you can do to preserve the environment and Bali’s amazing living culture. Modern Bali things like traffic, plastic and advertising billboards are becoming really boring, so do what you can to influence local people to expunge and avoid these things.

If you had to be stranded on a deserted island for a month, what three things would you bring with you and why?

I would bring a lot of beer, a hot Javanese woman I love, and all of the books I’ve been wanting to read (but have not yet read).

Great answer. And what has been your greatest achievement to date?

My greatest achievement in life has been to raise two beautiful and loving children (a son, Lorca, and a daughter, Asia) by myself.

And finally, what three words best sum up your personality, Leonard?

Thank you Leonard! If you’d like to get in touch with the dude, email him at [email protected].