In the game of football, FIFA counts over 300 million players in 2012, mostly men and boys, but an increasing number of women.

Despite this, there are few internationally known Indonesian players.

At the end of 2012, the UK’s Guardian Newspaper conducted a poll of eleven of the top sports journalists to find the top 100 players currently playing around the world. Although they came from every continent, all played in Europe and South America. Lionel Messi was unanimously voted No. 1 in the world for the fourth year, with Christiano Ronaldo coming second.

There is no Indonesian player in the current list of the best 100.

The best Indonesian players on the world stage have all been Dutch nationals of mixed Dutch Moluccan descent. The best was Giovanni Christiaan van Bronchhorst who won many trophies and earned 100 caps with the Dutch national team, captaining it for two years before his retirement in 2010. Others include Piere van Hooijndonk (46 caps) and Simon Tahamata (22 caps). 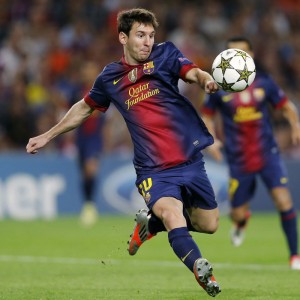 Of Messi, his former Barcelona manager, Pep Guardiola, said,“It is hard to find sufficient superlatives for him. He can do everything: control the game, slow it down, speed it up and, above all, win it.” He told everyone to just enjoy him: “Don’t write about him. Watch him!”

“I don’t want to even compare anyone else to him,” Xavi Hernández once said. “Because it’s not fair – on them.”

Today, the best in the world when in their twenties and thirties will be found playing in one of the major leagues of Europe and South America, where as a rule of thumb the vast majority of the planet’s most talented individuals end up. This is because of the global reach of modern scouting networks which means undiscovered gems in remote corners of the football world are rarer than ever.

Bali’s Canggu Club has hosted football tournaments for each of the past four years coached by Real Madrid scouts. No one has yet gone on to play for a top European or Asian side. 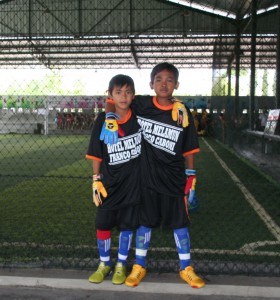 Franco Caboni, a Dutch national of Italian descent, has just completed a stint in Lovina, Buleleng district, assisting the Indonesian coach, Agus, of a mixed school side to pick up the pace of training in this football backwater.

He speaks highly of some of the talent he found there. “Who knows where they may end up with the encouragement of a good coach and the pride of playing in a winning team”, he says.

Franco was on a short holiday with his wife, Poppy, when he took an interest in the local team sponsored by John and Suzie of Hotel Melamun (meaning “daydream”) where he was staying. The all-boy team was a ragtail and bobtail of players aged between six to 12. In the space of less than one month, some of this motley crew, who took part in four practice sessions a week of two hours each, went on to be fourth placed in the Buleleng junior school (SD 3 level) league competition held in mid-February this year. 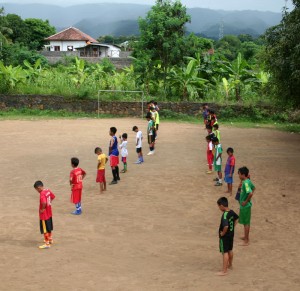 Most of their village of Banyualit, located in the hills above Lovina, turned out to see them play in their chosen team colours, also the Dutch national team colours of orange and black, to play in for the competition. The best of the 44 boys now associated with the club were on the field during this three day knock-out competition. Their main coach Agus, only 22 himself, plays for a local side that has been as far as Singapore to play in soccer competitions. His Lovina side won that international football competition.

Maybe within the next decade there will be a Made, Wayan or Nyoman playing for the Indonesian national side, who was coached in his youth by an Italian/Dutch soccer fanatic.

Now that would be worth talking and writing about.