Meet Tai Graham, the man behind Single Fin and the world renowned Sunday sessions of surf, dining and music overlooking the Indian ocean at Uluwatu. Tell me your Bali Story.
I was born in Australia. My father was Maori, from New Zealand and my mother is British. I grew up on the Gold Coast and was schooled there. At the age of seven my mother moved to Bali. I stayed in Oz to do school, and was shared between Oz and Bali. Every Holiday I would be in Bali, at least four months of the year. I am living in Seminyak. My mum still lives here as well. We lived on Jalan Padmam, which is where I caught my first wave on my surfboard. I surfed with guys like Made Kasim and that whole crew of great surfers. It’s funny because I met Made Kasim when I was just seven years old and now I am business partners with him at Single Fin!

Where did you go to school?
I was educated from primary school to high school on the Gold Coast of Australia in a town rich in surf history. I was a footy player. My dad was a Rugby Union player and then I started playing Rugby leagues. I did well playing league but I got over football when I started surfing.

How did Single Fin start?
I had another venue named Black Dog with Tipi Jabrik. We started that together and when it was time to move on we both ended up with pretty successful ventures. Tipi now owns Mantra with his wife Febi. I got approached by Kasim to do Single Fin in Uluwatu. Initially I was sceptical because it was so far away. I had always lived in Seminyak and Uluwatu seemed like a long way to go to party although I never thought it was a long way to go to surf. But I did see there was an opening; a niche, just like Black Dog. No one in Bali was doing a Sunday session. In Oz everyone loves a Sunday session. That’s one of the biggest nights there and no one was doing it here, so I saw a need for that. We had a few little renovation tweaks. We tested it out and it’s been going ever since. We get told all the time that it’s some people’s favourite Sunday sessions in the world. I think when you have that sun setting over the Indian Ocean, waves, mixed in with the relaxed party vibe – it is pretty special for some. 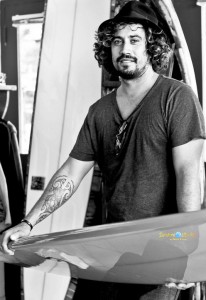 Single Fin shops have an eclectic variety of merchandise that appeal to a diverse clientele. Did you plan that?
I always personally loved the surf, music and art scene. I opened a small shop named Little Wing years back that was the same kind of merchandising. There is a cool scene going on which is a blend of surfers, musicians and artists; surfers who love and play music, artists who love to surf. Multi-talented people coming together inspired by the different art forms and the natural setting of the surf world creates a great mix. I want Single Fin to be a reflection of that with products offered which appeal to everybody. We don’t manufacture. We invite local producers to put their goods in the shops; keeping it all local. I wanted to create a venue with a very broad spectrum of clientele. This same philosophy extends to the restaurant and bar. From your hipsters to folks in Bintang singlets, grandma and grandpa, and all the kids. We play a mix of music for everybody; from reggae to classic rock to dance and hip hop, so it touches many different people.

You have seen Bali change so much. What is the biggest challenge we face which can be addressed by us?
That would be pollution, for sure. I do not think we will ever stop development. Actually, we can be seen as being partially responsible for that. We live a great lifestyle, friends come to visit. They come back to reside here and build a house – that is just the way it is going to go on. But the pollution is something we can deal with and stop. I believe we can do this by instilling a sense of ownership and the responsibilities that go with that to both locals and expats. Like in Australia for instance; if you are driving in a car behind someone and you see them throw a cigarette butt or a can of coke out the window you’re going to honk the horn and yell at them. You get angry because it is like, how dare these people pollute this beautiful country! All parties need to take responsibility for the land and start getting upset about it a bit more. In the West we are educated more on waste management. Maybe Bali needs to adopt and enforce formulas and rules from other places like Australia and Hawaii to protect the natural resources. 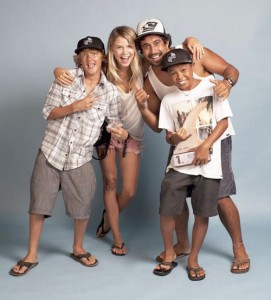 I know Single Fin is active in supporting environmental projects such as Project Clean Up at Uluwatu.
PCU is constructing a liquid waste system tank and bought an eighteen cubic meter STP tank. They laid two main connection lines and hired full time maintenance staff to finally rid the ravine of the black stinky cesspool. It is projects like these that may return Bali to a cleaner nature.

What are the future plans for Single Fin?
Keep on trucking along. Keep on providing people a fun place to enjoy themselves. Maybe see where else we can set up something similar?

Any interesting upcoming programmes you’d like to mention?
I’ve also launched Bali’s first surf training facility; a training studio that targets the fitness fundamentals of surfing. Body weight training; core training type. I’ve also launched a High Performance Camp that will be going on through the end of November. Check it out if you’re into that. There’s also the Art of Surfing Bali and Modern Movement Training Studio.