Two hundred years ago a volcano violently erupted on the island of Sumbawa, sending molten rock 40km into the sky – the most powerful eruption on Earth for 500 years.

In Nusa Tenggara Barat, on the island of Sumbawa, stands Gunung Tambora, the second highest peak in the region at 2,722m. Back in April 1815, the volcano could well have been 1,000 metres ta ller, similar to the heights of Mount Blanc and standing as one of the highest peaks in Indonesia. It was during the month of April 200 years ago when this volcano erupted so violently it was heard as far as 2,000 kilometres away.

In his book Eruptions that Shook the World, Clive Oppenheimer, a volcanologist at Cambridge University, puts the number killed by the ash flows, the tsunamis and the starvation that followed in Indonesia at between 60,000 to 120,000, making the eruption the deadliest in recorded history. The eruption’s impact on the world would prove to be epic, as Tambora literally blew its top off, sending 160 cubic kilometres of fragmental material into the atmosphere, resulting in what was known as 1816’s ‘year without a summer’ all around the world. The magnitude of the eruption is still very much evident today, and with a hike to the crater rim, one can witness a crater 7 kilometres in diameter.

With other hiking enthusiasts and fellow members of Java Lava, we set off on an adventure to Tambora on the island of Sumbawa. On our flight from Denpasar to Bima, my window seat allowed me to absorb the spectacular views of Gunung Rinjani, which stands on proud today as the highest peak in the Nusa Tenggara Barat region. Such a site of this towering neighbour whet the appetite for what was to come on Tambora. 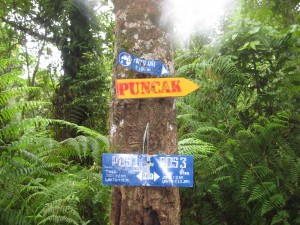 From Bima airport we were transported by rented Kijang to the starting point, about a three-hour drive, and our first night’s rest before our ascent started at a hostel in the coffee plantations of Pancasila. It is advisable to pick up ample supplies of mineral water en route as clean water sources are not guaranteed during the hike to the crater.

Our base was a lovely bungalow set amongst the coffee plantation – a 20-minute ojek ride up dirt tracks above the village of Pancasila. On the first night we were welcomed by Dutchman, Rik Stoetman, an expert in the history of Gunung Tambora’s eruption who has, for several years, led a team of archaeologists. Stoetman took us to a nearby excavation site where a team of local archaeologists had discovered the remains of an old house that had been obliterated by the 1815 eruption – captivating stuff on the eve of our hike to the crater.

We set off at 7am from base camp, which is highly recommended especially for those planning to reach the crater rim well before sunset. The first few hours of hiking takes you through the hot and humid jungle. Hikers will be rewarded with little traffic and well-marked paths throughout the jungle, and thanks to its reasonable distance from heavily populated Java there was very little litter. For nature enthusiasts, one will probably encounter wild boars, wild chickens, and a constant serenade of healthy birdsong; sure signs of a vibrant ecosystem.

Fast hikers will reach the crater rim in around 6-7 hours, steady ones in 9 hours, as the hike can get very steep once clear of the forest and into the more exposed valley terrain. For slower hikers, it may be advised to camp at Post 3 or Post 5, allowing for a second night at the crater rim. Once clear of the forest, the vegetation lessens and the remains of the copious lava flow from the 1815 eruption can be seen from the deep valleys cut into the volcanic rock along with black sand.

Upon approaching the crater and steadily into my last hour of climbing to the rim, a small volcanic earthquake occurred.

Several of the faster hikers in our group were already at the rim admiring the site when the quake occurred, which triggered a small landslide into the caldera.

Be warned, folks, this was an indication that Tambora is still active, so step carefully when visiting and camping near the crater’s rim.

We set up camp approximately 200m from the crater rim, which offers several ideal camping spots albeit being a bit exposed. After a good night’s rest and some warm food we proceeded to climb the summit, a small but steep rocky outpost above the crater rim. On a clear morning the views were majestic and Rinjani could be seen towering in the distance. 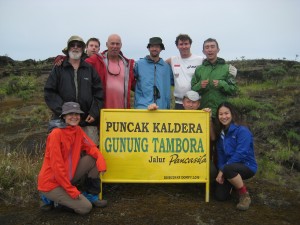 The size and sheer depth of the crater and caldera will take your breath away and some would say it is one of the world’s most fascinating places to witness. The immense size of the crater prompts a reminder of the power of nature at our Earth’s core bubbling below, as the Eurasian plate and the Indo-Australian tectonic plates grind together, creating a subduction zone in a region of the world that has been suitably labelled ‘The Ring of Fire’. The island of Sumbawa offers a totally different landscape for those who reside in Jakarta or on the island of Java.

Indonesia offers hikers and nature lovers true adventures. Local airlines offer extensive connections all over the archipelago for those looking to explore. If you would like to join fellow hiking enthusiasts in discovering the wonderful peaks of Indonesia, Java Lava provide regular monthly hikes to some of the more off-the-beaten-path regions of Indonesia and have been doing so for over a decade.

Contact the secretary at [email protected] to find out about the upcoming hiking schedule for 2015, which includes Kelud, one of the most active volcanoes in Indonesia. For those looking for an online reference regarding the mountains and volcanoes of Indonesia the website www.gunungbagging.com will provide all the information you need.