What better way to spend a stunning, sunlit Sunday than with beautiful people, dangerously delicious cocktails and an EDM God in a venue of immense beauty that is Potato Head Beach Club.

Sunday was a scorcher! Tourists and Expats from all over the world flocked to be a part of what some may favour the highlight of Bali’s 2012 Music Calendar starring none other than Norman Cook aka Fatboy Slim.

The event kicked-off with hotshot DJs, Stevie G (USA) & Lady Flic (NZ), who delivered a mix of House, Reggae, Soul and Chill classics to a rapidly expanding gathering of young and old boasting six-packs and bikini-clad beach-bods; eye-candy heaven to say the least. Whilst Bintangs and inflatable crocodiles governed the pool area, a more relaxed crowd basked in the sun enjoying cocktails on the lawn. Ye lads and lasses flirting, friends chatting and old friends catching up; all round, great vibes with a cheerful Summer Music Festival ambience swept POTATO HEAD BEACH CLUB on a glorious scorcher of a day, which in spite of the recent weather back home, I took great pleasure in announcing via Facebook (cheeky smile). Back to the music – tunes from old to new, from Classic 60’s Soul to 00’s Big-Room House got Bali’s finest and visitors up on their feet from late afternoon to sunset thanks to POTATO HEAD’s Expat Resident DJs.

With a picturesque backdrop of the Sun setting, the venue packed and the crowd wild with excitement in ever-escalating anticipation – silence struck – and after a world-class introduction from the MC the venue erupted to Praise You, a Fatboy Slim fan favourite and what I like to call “one of those religious music experiences” – goose-bumps, hairs on end, shivers down your spine, smiling faces, peace, love and unity. 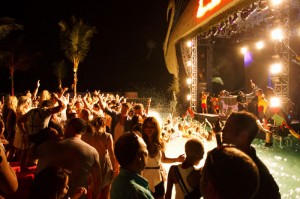 During the course of the evening an eclectic mix of the unique Fatboy Slim sound ‘Party Acid House’ rocked the BEACH CLUB from Oldskool Electronic Classics to Hip-Hop Anthems to Rock n Roll Legends. Satisfaction and Rock The Casbah, legendary Rock n Roll classics mixed with Mr Slim’s own tracks and a locally inspired remix which definitely got the fans pumped: “I’m In Bali, B****” teased and hyped the fans. Amongst them were other memorable Mash-Ups and Classics including Not Over Yet and California Love.

As you all may well know the “Funk Soul Brother” has always had a knack for uniting crowds through music and props and is no stranger to summer beach parties ie his Big Beach Boutique; giant Smiley Skull and Cross Bone beach balls (a Fatboy Slim Trademark) were tossed into the sea of ravers. Bob Marley’s Could You Be Loved, House Of Pain’s’ Jump Around and a version of John Paul Young’s Love Is In The Air, created an immense sense of love and unity among revellers, which great music and people often do.

Disgruntled party-goers complained about the queue for the toilets when in fact the toilets were not fully occupied, although some attendees did not comply with queuing or security POTATO HEAD BEACH CLUB did well to control the facilities for such a large-scale event. When asked regarding the toilet situation, Steve Cromie, Operations Manager shared, “Regarding the toilets, we were limiting the number of people going downstairs for two reasons; so as to not create a bottle-neck in the area as it is quite enclosed and also to ensure that cleaning was taking place, in-between customers,”  Fair-play to Steve and his team.

Fellow ravers were also miffed about ticket and drink prices. I asked Emilie, 30, a Lawyer from Paris on her viewpoint. “It is such a beautiful place (Potato Head), it is a little expensive but to see Fatboy Slim in Bali, it is worth it.” Holly, 33, a Dive Instructor from West London praised, post-gig, “Awesome, the best event in Bali so far, great drinks, great people, awesome music!” From the roars of the crowd and smiling faces, I imagine everyone got their money’s worth.

This was my first ever Fatboy Slim gig and it lived up to my expectations; fantastic music, an electric atmosphere, crowd unity and a togetherness which we should see more of in the Bali party scene. Merit is due to POTATO HEAD for their friendly and attentive bar staff, security and organizers who made it a pleasurable party experience.

This was without a shadow of a doubt up there with the greatest music events I have ever been to, if not THE best. Musical experiences and journeys such as on Sunday 15th are few and far between and for a music-lover such as myself, bliss!

I think and hope I speak on behalf of all the attendees when I ask POTATO HEAD BEACH CLUB; “WHEN IS NORMAN COMING BACK!?”