In Bali the purist embodiment of Greed, one of the most ancient and reviled of the Seven Sins, is found in the 15th century tale of the brothers Cupak and Grantang. Long popular in literature, drama and the visual arts, Cupak is a tale of greed, deception and betrayal that starkly illustrates cultural values and a belief in karmapala – the Hindu-Buddhist equivalent of “you reap what you sow”. It also mirrors a political social conflict between primogeniture, the right of the eldest male to assume authority, and selection by merit, the need to choose those most capable at a time when younger brothers displaced their inept older sibling in the struggles for succession that plague Balinese and Javanese history.

Fat, ugly, boastful, lazy and cowardly, the elder brother Cupak was as clever as he was devious when it came to manipulating his younger brother Grantang, who was the epitome of cultured nobility. Together they would set out to work in the fields, but in truth Cupak would sit in the shade and criticize as his brother toiled industriously in the hot sun. Conspicuously neat and clean, Grantang would bathe in the river and return home only to discover that Cupak had denounced him to his parents as a slothful shirk. Rather than denounce his older brother’s lies, Grantang held his mouth even when punished.

After one particularly severe incident triggered by Cupak’s deceit, the parents banished Grantang to the forest. Cupak tagged along, blaming his brother for their troubles as Grantang carried their heavy load and Cupak feasted on the food, growing fatter as he threw the bones to his undernourished brother.

When they arrived at the frontier of the mighty kingdom of Daha in East Java, they heard that the Raja had offered the hand of his beauteous daughter, Mustikan Ing Daha, to any man who could save her from the evil ogre Detya Manarong, who had kidnapped her and carried her away to his fortress in the jungle.

As they arrived at the court, Cupak loudly boasted, “Ogres are no more to me than flying ants that I crush between my fingers. I will hunt down, kill this monster and claim my reward”. 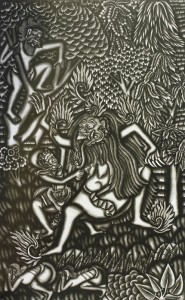 Grantang, who was an experienced tracker, set off immediately in pursuit. Upon the discovery of Detya’s enormous footprints deep in the jungle, a cold shiver struck Cupak who finally realized that danger was near. His angst grew as the approached the walls of the giant’s formidable fortified palace. Fearful of wandering too far from his brother’s side, Cupak followed as Grantang shimmied up a tall tamarind tree that allowed them to peer into the garden below where the beautiful Mustikan wept uncontrollably as the misshapen ogre bragged about all the benefits she would gain by marrying him.

The courageous Grantang immediately leapt into their midst to save the princess from the clutches of the ugly monster. Using a powerful magic spell he stunned the ogre. Mustikan was so amazed by the handsome muscular youth that she believed she had been rescued by a god incarnate. While she swooned with love for her saviour she also had enough wits to inform Grantang that the giant was invulnerable to weapons except his mouth. Detya revived in a terrible rage and a battle that shook the three worlds ensued. Grantang finally defeated his enemy by firing a succession of arrows into his gaping maw causing him to fall down stone dead with a great thud. Overcome with gratitude she presented a golden ring, a royal gift from her father, to the lad, who put on his finger.

Frozen with fear still long after silence had returned, Cupak slowly opened his eyes and uncurled from his hiding place to see the beautiful princess staring at his victorious brother with adoration. Snapping out of his daze he shouted, “Stay away from here, I am the oldest brother, she belongs to me”. Grantang retreated before his perfidious sibling.

As they travelled back to the capital, misfortune struck once again.  Cupak, who was supposed to keep guard as the exhausted Grantang slumbered, failed at his task giving an opportunity to another ogre who lived at the bottom of a well, to kidnap the princess. Once again Grantang swung into action descending into the well to defeat the fierce demon after a vicious struggle. As he handed the princess to his brother, he carried her to a safe spot, and returned to the well. Rather than help his own brother, he closed the top and abandoned him to die a soggy, smelly death surrounded by the rotting flesh of the ogre. Informing the grieving princess that Grantang had expired from his wounds and was no more, they marched back to the capital where Cupak proclaimed his heroic exploits and claimed the princess as his own.

Weak and wounded, the tenacious and resourceful Grantang slowly stripped the flesh off the bones of the giant and used them to build a ladder by which he escaped his watery prison. Emaciated, the first locals he met ran to the palace to say they had seen a wandering evil spirit. As cunning as ever, Cupak realized that his attempt to commit fratricide had failed. Taking advantage of the situation he had the spirit beaten unconscious, stuffed in a burlap bag and cast into a river whose raging waters carried it down to the sea.

Now feeling completely secure as the heir to the throne (the princess had no brothers) Cupak lived a penultimate life of decadence – feasting, drinking and whoring as he pleased. Devouring scores of suckling pig every day, the farmers groaned under the burden of his accelerating demands. His notoriety expanded with his girth and nobody dared rebuke the shenanigans of the fiancé of their beloved princess. 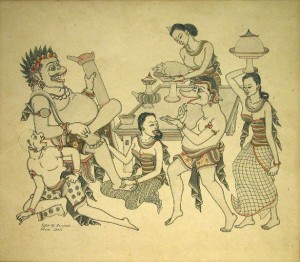 Karma, however, would catch up with Cupak when he least expected it for his brother once again managed to miraculously survive, saved by a kind and simple fisherman who had caught him in his net. The fisherman and his wife, who were childless, had long prayed to the gods for a son. The discovery of the handsome unconscious boy in their nets convinced them their prayers had been answered. Slowly nursing him back to health, Grantang, who suffered amnesia, was a model son who regularly accompanied his adopted mother to the market to sell flowers. Mustika, who regularly bought flowers from the women, noticed the ring on his finger and realized her beloved Grantang was still alive and well.  The meeting also jarred Grantang’s memory of all. Filled with righteous anger he confronted his now gigantic drunken brother and demanded justice. The crowds joined in and threatened the now bloated Cupak with death and the ugly glutton slinked off into ignominy and shame forever.

The Cupak story would live on in Bali for many centuries. The popular theme of good versus evil was performed in dance and theatre genres including Gambuh and Arja. The story was also depicted by Balinese artists including the great Gusti Nyoman Lempad of Ubud and Ida Bagus Nyoman Sasak of Batuan who’s expressive Batuan school ink on paper shows the hairy Cupak hiding in the tamarind tree as his brother battles the evil witch Benaroe, stabbing her in the heart with a kris.  A new version of the story entitled “Cupak Devours the Earth” that compares modern real estate agents with the Glutton recently appeared in North Bali. The same theme was featured in an article in Britain’s Guardian newspaper entitled “In Bali, rich foreigners are sparking a property frenzy, but who benefits?” (http://www.guardian.co.uk/world/2013/mar/09/bali-property-frenzy-islanders-boom) just goes to show that peoples of all nations share similar values when it comes to engorging or enriching yourself at the expense of others.