From time immemorial humans have been transfixed by the heavens. The oldest map of the night sky, found in Germany in 1979, is of the Orion constellation carved on a Mammoth tusk over 32,000 years ago. If you’re from non-tropical Asia, Europe or North America, you will see a whole new night sky over Bali. All of your old familiar astral friends are still here parading from east to west across the Southern Hemisphere each night, but the constellations will be in totally different positions.

Stargazing in the countryside of Bali is unique because of relatively little light pollution, so the background is very dark. You will also be able to view a larger portion of the sky in the Southern Hemisphere than can be viewed from the Northern Hemisphere, though the southern sky is not as populated with as many bright stars as in the north.

You can start stargazing in the early evening in the tropics, as the twilight is very short in the late afternoon and early evening. The sun’s path through the sky at the equator deviates very little throughout the year. The sun lingers briefly and then drops below the horizon almost immediately after sunset and rises quickly above the horizon at daybreak, usually at 6 pm and 6:30 am (depending on the season) respectively. An unusual tropical phenomenon which occurs year round, not visible in the northerly latitudes, is a strange faint glow – a reflection of meteoric dust – called the Zodiacal Light which hovers over the horizon when the sun rises or sets.

Since the cloud build-up during Bali’s rainy season (November-April) obscures the night sky, pick a clear moonless evening in the dry season (May-October) when you are almost guaranteed a cloudless night sky. Even in the lower latitudes of the Northern Hemisphere, city lights or clouds on the horizon usually obscure many lovely constellations that can be clearly viewed on Bali. The air transparency is remarkably clear in almost any locale outside the Denpasar area.

The Stars of the Southern Hemisphere

The brightest star in the Southern Hemisphere is Scorpius. The long, curving tail of this enormous and awe-inspiring constellation reaches its fullest height on the meridian in Bali at 8 or 9 pm in July. Just east of Scorpius is the broad spangled band of the Milky Way (called Danau or “lake” in Balinese), stretching across the centre of the skies from north to south, packed with scores of brilliant stars.

The Big Dipper (called Perahu or “boat” in Balinese) is only visible, low and to the north, after 8 or 9 pm from February to June. Orion doesn’t appear until mid-November. Called Tenggala (The Plough) in Balinese, it lies on its side and more resembles a plough than it does when viewed in the Northern Hemisphere. Polaris is out of sight below Bali’s horizon. 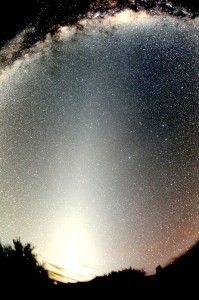 Aries, the Ram (called Bengkongor or “the curve” in Balinese) doesn’t make its appearance in Bali until late September. Magnificent Pheiades, the Seven Sisters, does not rise until early October, and Taurus, the Bull, until late October. Taurus is unmistakable because of the fiery red colour of its main star Aldeberan, called Suda Malung or “eye of the pig” in Balinese.

What comes as a surprise to people from northern climes, the most striking feature of the southern skies is not the Southern Cross. Known as Crux by astronomers, the Cross can be made out in different positions and at different times in the course of the evening depending on the month of the year. The constellation is not very big, dwarfed by Centaurus, the half-man, half-horse Centaur creature of Greek mythology, a huge and sweeping star group.

The Southern Cross is still quite distinguishable in the southern skies. Consisting of five medium bright stars, the constellation can easily be seen on Bali around 8 or 9 pm between December and August. It will be at its highest, 30 degrees above the horizon, in May at 8 or 9 pm, but will drop below the horizon during August, appearing again in the east in December. In its highest vertical position, the Crux will cover four fingers held at arm’s length.

Once identified, the Southern Cross will remain a constant point of reference around which all stars in the Southern Hemisphere are displayed. If you look west of the Southern Cross, you’ll see two principal constellations – the large rambling Vela, the “sail”, on Jason’s mythical ship, and directly below to the south is Carina, the keel of the seafarer’s ship.

Though there is no astronomy club in Bali, much less an observatory, the movement of the sun (Surya), moon (Candra) and stars (Bintang) play a weighty role in the Balinese religion. The signs of the Zodiac and their astrological connections, printed on the back of the traditional Balinese calendar, are widely consulted.

Balinese Astrology is based on the Balinese calendar of five and seven days, each day represented by a symbol in the form of a deity, tree, bird or animal. It is auspicious to worship the deity appropriate to the day on which you were born. For example, keeping a cat is particularly lucky for people born on a Thursday.

Ancient palm-leaf manuscripts record astronomical events, accounts of lunar and solar eclipses and heroes named after stars are found in the Hindu Mahabarata epic, the names of prominent stars are recited in the mantras of priests, lamak cut out in the shape of stars are used in offerings. A comet (Bintang Kuskus) is said to have appeared at the death of Sukarno, Indonesia’s first president who was half-Balinese.

Because they fish at night, Balinese fishermen use different stars throughout the year for navigational purposes. The Pleiades constellation (Bintang Muwung) determines the north-south direction. When Canopus (Lumba-Lumba or “porpoise”) is rising, it means that the winds will blow strongly from the southeast. Some old farmers still use the stars to decide the right time for harvesting and planting.

Indonesia, Australia to Work Together on Improving Agriculture, Climate Change

Alexis Hotel Posts Banner on Building to Declare Its Closure