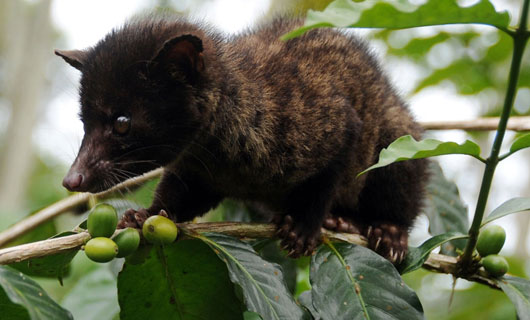 There’s nothing like a nice and warm cup of excrement in the morning to really get the day going strong is there? With the aroma, the flavour, and the low acidic content, just thinking of my morning cup of bum-nuggets makes all my endorphins dance crazier than a jazz trumpet king high on benzos. Although this is quite the dramatic overstatement, it seems to make sense in the world of Kopi Luwak, or as some people like to call it – “poop coffee”. With prices on the international market varying between $100-$600 for every kilogram, Kopi Luwak is easily the world’s most expensive, and most luxurious coffee; which is all thanks to one adorable little animal and the contents of its digestive system.

Kopi Luwak is famous around the world for being a specialty coffee, and due to its small production quantity and infamous origins, it is one drink that people from around the world will pay large amounts of money for. Like the rumours state, Kopi Luwak comes from the droppings of the Asian Palm Civet, a mammal native to several parts of Southeast Asia, including most of Indonesia. The production of Kopi Luwak is quite long, complicated, and loaded with scientific jargon, but in basic terms the palm civet eats various beans from the coffee berries, digests the beans while mixing in an assortment of enzymes (which germinates the coffee and adds to its smooth taste), and thereafter excretes the beans in full. These beans are washed extensively, sometimes ground or roasted, and then sold for high prices both domestically and internationally.

Due to the low production costs and the high price tag of Kopi Luwak, things like fraud and inhumane treatment of the Palm Civet have arose and caused a major outcry from around the world towards Indonesia’s own Kopi Luwak. Although fraud is never a good thing, the real problem around Kopi Luwak comes down to the palm civet itself, and when farmers see the cat as an investment instead of a live animal, then things like caging, starvation, and other heart-wrenching and utterly inhumane conditions begin to surface.

I had the wonderful chance to sit down with my friend Jesco, a long-time Expat and vivid coffee enthusiast who is not only an exporter of humane and legitimately produced Kopi Luwak, but also an influencing force in the proper treatment of the palm civet in the production of the coffee.

“Kopi Luwak is very popular for several reasons,” he told me, “and really it is all about the acids. It is one coffee that everyone can drink and is actually soothing for the stomach, while at the same time it’s smooth in taste and has a uniquely pleasant aroma.” 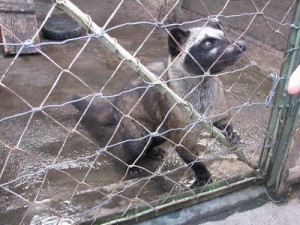 According to Jesco, who has been exporting his own brand of Kopi Luwak, it is virtually impossible to fake Kopi Luwak when exported to other countries. He showed me his own certification by the Indonesian government that proves his product is completely legitimate, which he obtained after his coffee went through several tests where a team of scientists check the acidic levels of the coffee. Even though the Indonesian government is unfortunately known for a bit of corruption in some areas, they are very strict about the Kopi Luwak that comes from Indonesia. Not only does the exporter contain a certificate of authenticity, like Jesco, but also the farmers must have one as well, and in the countries where Kopi Luwak is imported there will most likely be another team that checks its authenticity.

There are two types of Kopi Luwak that relate to the condition of the civet as well: bred and wild. In terms of production, the most ideal time to “pick” the excreted beans from the civet is two days, not before and not after, and since some farmers rely on finding civet droppings in the wild it is quite difficult to measure exactly how long those droppings have been sitting. This, along with breeding civets for larger outputs and other reasons, is one of the main driving forces that lead some farmers into caging the palm civet and therefore controlling the production.

Additionally, since the bean is the only output that the farmers need, Jesco tells me that in some farms the only thing fed to the civet is the bean.

“Sometimes the civet just refuses to eat the coffee beans, and therefore some farmers will starve their civets to the point where they are forced to eat the bean. This just produces bad coffee. What makes good Kopi Luwak is due to the several forces within the civet’s digestion system, and since the coffee bean is only a small part of the civet’s diet it needs to eat naturally in order to produce a quality coffee.” Jesco continues, “It’s just terrible to force the civet to eat something that it really doesn’t want to.”

At this point it would seem that bean found in the wild would produce the best Kopi Luwak, but as Jesco said, a critical component in the Kopi Luwak process is the time in which the bean is picked. Therefore, controlling the conditions of the civet produces a constant and quality Kopi Luwak. Mixing the conditions of wild and caged civets is certainly the best means of good Kopi Luwak production, similar (if not better) to the conditions of a zoo in Western countries. Jesco has visited hundreds of places in Java and Bali while trying to find good farms that can produce a decent Kopi Luwak, and in the farms where the production is controlled he also witnessed some of the worst conditions for the welfare of the palm civet, including starvation, very small and dirty cages, and very unhealthy looking civets.

“I don’t understand the logic behind some of the farmers,” he says, “and therefore for the farms where I get my coffee I have had to teach the farmers all about when to pick up the civet droppings, the diet of the civet and how to feed it properly, and the cleaning process of the bean. It’s all about making a good product, but it’s rather funny when a foreigner is teaching the farmers about producing quality Kopi Luwak.” 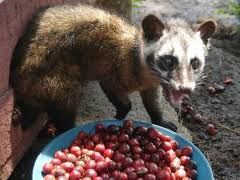 For buyers, producers, and exporters, creating controlled conditions around the civet is the best way to ensure a steady and quality product; however, many farmers don’t have the funds or the knowledge in order to properly take care of the civet in doing so. From Jesco’s journey into the world of Kopi Luwak production, he tells me that only about 50% of all the farms that he visited actually treat the civet decently. Since good Kopi Luwak comes from healthy civets, in all of his producer’s farms Jesco has helped make considerable changes, such as proper diet control and larger free-range areas for the civet to run around, play, and live a life that is not designated as captivity.

“In order to export Kopi Luwak at a larger scale you need to buy from several farms, as when one farm is offering a lot of product, you know that they are breeding the civets and, in most cases, treating the civet terribly.”

Kopi Luwak is undoubtedly a wonderful delicacy, and aside from the fact that it is made from poop I can see why it is such a luxurious drink famous around the world. Like many products that have a rather high price tag, it is unfortunately understandable that some people will go to extreme lengths to try and make as much as they can off of it regardless of the welfare of the civet. When something simple like bum-nuggets are worth as much as gold nuggets, some people will try to exploit it as much as possible. However, with people like Jesco, this can certainly change. Good Kopi Luwak comes from healthy civets, and because of this positive correlation there is a lot of hope for change and better treatment of the creatures, the only problem is that there needs to be more Jescos who not only love Kopi Luwak, but also love animals as well.

Cigarette Ads at Railway Stations to be Evaluated