The overwhelming majority of parents would agree that giving their kids a good education is a priority in life. First as a passport to a good job, but also as the key to solving so many of the world’s problems, leading, as it should, to the elimination of ignorance. I admit I’m coming from the “Western” standpoint of liberalism, democracy, tolerance, free speech, and that there are other values, like Asian Confucianism and paternalism which deserve consideration, respect and incorporation in a more universal set of values. And also that, on the other side of the coin, there are institutions, in the West as elsewhere, which promote intolerance and adherence to one particular set of ideological or religious dogmas while trashing others. But that is indoctrination, not education.

I started work at Bandung International School (BIS)* in 1985, and remained, on and off, until 2003, first as Teacher-Librarian, then as ESOL Teacher. When I began at BIS, it was notorious for parental interference in the school. It had been set up in 1972 by a group of parents, and for years some parents felt they had the right to interfere in the school, crossing the line between parental involvement, so essential to a school, and unsettling interference even to the extent of wanting to be involved in writing the curriculum. (One such request was circulated among the staff by an insecure principal, to be countered by a teacher. “If Mr _______ cares to tell me what he does for a living, I’ll give him some gratuitous words of advice!”)

Bandung was very different in those days. It was still the cool hill-station planned by the Dutch as Insulinde’s future capital. And old colonial and racial attitudes could still be found among the expats who founded the school. There were no pubs, and the expat scene tended to revolve around the Hash and BIS. No school principal lasted more than two years. The pattern was that a principal would be appointed by a particular group of parents on the Board, that Board would then be replaced by a new elected group of parents who were not enamoured of the principal and would do their best to try and replace him or her, only to be countered by the members of the previous Board. Three times a year there were heavily politicized meetings of the whole parent community, unpleasant except for those who, in the absence of pubs, found entertainment value in the crucifixion of a principal. Adulterous affairs between Board members and teachers were all too visible. Man, it was a soap opera, a mini-mirror of the Happy Valley of colonial Kenya.

Bundled with this went colonial attitudes to the host country. Sadly, specimens of the ugly expat and the Anglo-Saxon swine could be found among the Faculty. A group of teachers including those of us who were married to Indonesians were constantly trying to counter this, encouraged by one of the finest principals I have ever worked with, the New Zealander Gavin Allen. 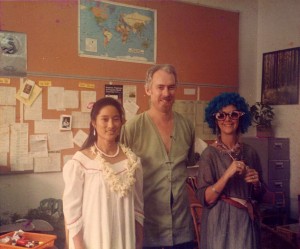 And BIS was always a happy school. I put it down to the great kids, and certain teachers. The student population was small, about 150 in 1985 and rising to about 260 as new high school grades were added. In such a small student community you can’t have exclusive national student cliques developing, and in some of the classes the majority of the students were of mixed parentage. So much so that it came to be considered cooler to be “mixed” than otherwise.

Other factors helped get rid of the culture of parental interference and colonial attitudes. In 1996 the American Phil Joslin, another charismatic principal, was appointed. He put all the components of the school community, hitherto blurred in their functions, in the right place. From now on the Board made policy, he advised them and implemented it, the teachers taught, the students studied, and the parents fund-raising body, which had loved to interfere with the policy of the school, raised funds. Phil also put in a full high school, and pushed through the accreditation process.

He was helped by krismon/reformasi in 1997/1998. Many parents fled and many  projects closed. One effect of this was that new, incoming families were happy to have an international school in place, outnumbering those parents who had a memory, or a folk memory, of the school as being founded by them. The national mix of parents and students also changed, as Bandung re-invented itself as a textile town. Then the law was amended to allow admission of Indonesian nationals. Finally, pubs and malls began to proliferate in Bandung, so those spouses who had nothing better to do in the day than to interfere in the school had other diversions.

BIS remains a great “community of learners”, now a fully-accredited IB school, with a strong involvement in the host country, and for those parents looking for an excellent small international school I can recommend it without hesitation. My own children were educated there from Kindergarten to High School, and the great education they received at BIS has helped them both graduate from Australian universities.

After an assignment at JIPS (Jakarta International Prestige School), a privately-owned primary school where I was counterpart Principal and English, ESL and Social Studies Teacher, I moved to SCB (Sekolah Cita Buana) to teach ESL to Middle School and English Literature to High School.

SCB is a national plus/international school. It runs both the Indonesian National and the ACT (Australian Capital Territory) curricula. Students are mainly Indonesian nationals, plus many from mixed parentage. English is the campus language. The ACT EngLit curriculum is a joy, as it gives the teacher the freedom to select and study texts in depth with the students, as long as they fit a semestral theme, say, “Journeys and Quests”.

Perhaps the most admirable feature of SCB is its willingness and capacity to welcome and absorb so-called “challenged” students. SCB has formal support programs and special needs teachers and counsellors in place, but the aim is to welcome as far as possible “challenged” students into the regular classes, which is both good for them and the so-called “normal” students who thereby are learning tolerance, compassion and protective outreach skills at an early age. And let’s face it, we are all  “challenged” in some ways and  “abnormal” in others.

So I am an unashamed fan of SCB, and have no hesitation in recommending it to parents who are looking for a great national plus/international school and cannot afford the astronomical fees of JIS or BRIS. SCB achieves 100% passes on national exams, and of the latest graduating class, for example, most of the students have been accepted in universities in the UK, USA, Canada and Australia, or prestigious national institutions like ITB and UI.

Simply put, education is all about the kids, and all depends on the teachers. 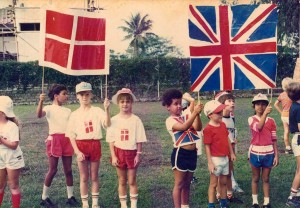 Yes, it’s all about the kids. Here, “The kids who will prevent World War Three?”. How many nationalities and cultures are represented in a typical class at JIS, BRIS* or BIS? Going deeper, how many individual kids are there in the class who in themselves blend different nationalities and cultures, i.e. TCKs**. How many religions? How many skin colours?  And do they care about these differences? They don’t even notice them.

So how can you want to nuke or kill somebody because they’re perilously slant-eyed yellow devils, or immoral Gaga-esque agents of the Great Satan, or sword-wielding fanatics who are out to enslave your women, if you’ve collaborated on IB projects with them, if you’ve played school basketball with or against them, if you’ve sweated to dig ditches in kampong community programs with them, (and if you are now stuck with them for life as Facebook friends)?

I realize that international school education as I have described it is way beyond the financial reach of most Indonesian families. Even free local elementary education was implemented here only in 2005.

But we have to start somewhere. So I am appealing to any international school students who may read this article. Many of you are going to be movers and shakers, decision makers in your home countries or wherever you find yourself in the global village.  May the tolerance and universality you have learned trickle down, especially into the field of education, modifying curricula to become more global and collaborative rather than nationalistic and didactic. Personally I believe world government must come, and my “take” on this is to imagine it has already arrived, and do some “reverse engineering” on how we got here.

And it started with education…