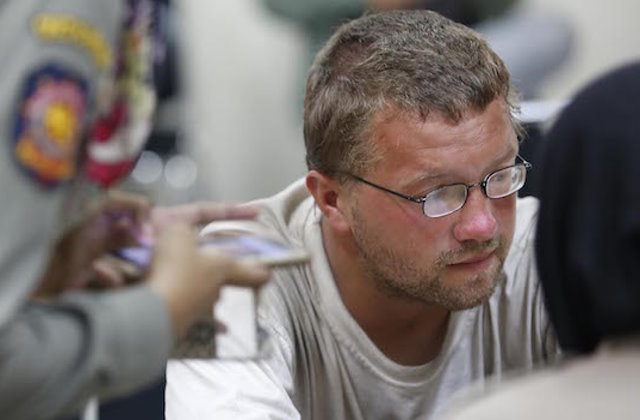 World renowned beggar Benjamin Holst is a folk hero with an abnormally large leg. He has been able to travel the world and party with cash made by panhandling, but recently he was arrested in Surabaya.

Holst is a well-known scam artist in Europe. Before showing up in the City of Heroes, he was spotted at a traffic light in Tabanan, Bali on Sunday, September 4. Someone took a video of Holst, which ended up going viral on social media. 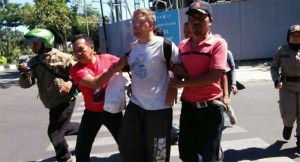 Usually, Holst’s scam revolves around getting sympathy from unwitting tourists and locals. When they see his leg (which is permanently swollen due to a condition called Macrodystrophia Lipomatosa) and hear his story about running out of money, but needing to buy a plane ticket home, good samaritans often hand over the money. In Indonesia, it probably would have worked for Holst, but the post of him in Bali made netizens recognize him as a professional beggar, who caused a ruckus back in 2014 when he took his con act on the road to Thailand.

In September of that year, Holst was ‘rescued’ by Thai locals who were sad to see him panhandling and sleeping on the side of Khaosan Road. Holst was a tourist at the time, enjoying the land of smiles, but still doing his best to look pathetic. Holst’s act seemed to work in Thailand, as locals handed over roughly US$1,432 in total for him to buy a plane ticket home. They also let him stay in a hotel for free. A crowdfunding site for him was created by Deutscher Hilfsverein Thailand, an organization that aides German citizens abroad.

Locals were traumatized, however, as Holst was discovered shortly thereafter at an awesome party in Pattaya, having squandered the cash he was given. Holst was immediately deported, and banned from re-entering Thailand, a place where drugs and prostitution are rampant, but evidently preying on sympathy is unforgivable.

Holst apparently did not regret the little operation he had cooked up, as he was later spotted panhandling in places like Denmark, the Philippines and Hong Kong. His routine usually consists of begging during the day time so he can have enough cash to party with hookers come sun down. He was even so bold as to post photos on social media of him enjoying expensive pizza in Hong Kong, and other cool images from his world travels. Seemingly, this guy just operates in a country until they get sick of him, and then he usually gets deported.

Holst’s latest frontier was Indonesia — begging, then partying with ‘lady friends’ at the local bars — until he got popped by police in East Java’s capital.

Holst has been placed at Lingkungan Pondok Sosial (Liponsos) Keputih, while Immigration tries to figure out what to do with him. The hits keep coming, however, as Holst refuses to feel guilty, and protests about the place he’s being held at.

Erni Lutfiyah, head of Liponsos Keputih, cheekily put Holst in his place, saying, “You have been panhandling in the street, and the law in this country already states that all people with social welfare issues like you will be taken care of here.”

After hearing this, Holst argued that he already had a plane ticket to fly home. He claimed that he was only begging in the street because he needed money for transportation to Jakarta and a hotel. Holst’s flight is supposedly scheduled for September 19, so it will be interesting to see what happens between now and then.

Holst may be telling the truth about returning to Germany, but nobody really knows. He’s done the routine several times already, so any country could be the next target on his bucket list. One thing seems certain: Holst’s appetite for cash and women doesn’t seem to be subsiding any time soon.

Benjamin Holst, love him or hate him?