A woman casting her vote on July 9

Indonesians went to the polls to directly elect their president on the morning of the 9th of July. By late afternoon, through Quick Counts, we were supposed to know who the next president of the world’s largest democracy was, especially since there were only two contenders. Prabowo and Joko Widodo.

Instead, before the end of the day, we had two president-elects thanking the people of Indonesia for their mandate to lead the country on national televisions. Come evening, the whole country was confused and bemused. What was supposed to be a joyful occasion became a stressful one and a painful one. It was a bit like a woman in labour and desperate to give birth, but told by the doctor that she has to hold for a couple more weeks.

The tension was so palpable that the President himself had to play referee and told the two opposing camps to restrain from declaring themselves winners and raising hopes amongst their supporters until the official results are tallied and announced on the 22nd of July lest it created conflicts and animosity on the ground.

In my experience of having gone through Indonesia’s democratic elections since 2004, this one is certainly the most historic and nail-biting for the entire country. So much so, that online social media traffic in this country on that day topped that of the global social media interactions on the crushing and humiliating defeat of Brazil by Germany during the World Cup match held a few hours before Indonesians went to the polls.

Like the World Cup, no doubt this election would also be as memorable, not least because of the stiff competition between the two contenders, the tightness of the race and the influence of the rowdy supporters. And like a disappointing match, euphoria can just as easily turn into disappointment, anger and frustration.

So, what to make of this election? Why so much contention? Will there be a clear winner in this race?

I note several things that make the 2014 Presidential election unique. But first of all, despite the disputed results, the clear winner here is the Indonesian people.

Like the over 180 million people around the country that morning on the 9th of July, I went to my local polling station in my neighbourhood filled with optimism and enthusiasm. I checked the ballot to make sure that it wasn’t tampered with, and punched a hole with the nail provided in the box showing the pictures of the presidential and vice presidential candidates. After putting my ballot in the sealed box I dipped my pinky in the indelible ink, took a couple of selfies to share with my friends, proud that I’d done my civic duty.

The process was quick, simple and done in a friendly and neighbourly atmosphere. A process that was repeated in over 500 thousand polling stations scattered around the archipelago.

Around 1pm, when the polls closed, I returned to witness the ballot count. There were also witnesses from both contending candidates. It was done quickly and with little mishap as there were less than 300 people voting in that station that day. Team Jokowi-JK was the clear winner here. The votes were tallied on a sheet of paper and signed by the officials. I took a picture of the result as proof and to post on Twitter. And that was it.

This is why Indonesia, since she became a democracy in 1999, has been able to hold peaceful elections with relatively little violence and fraud. At least on the election day, when every eligible voter is able to take that slip of paper and make his or her choice in the polling booth freely and secretly, in their neighbourhood area where everyone is familiar with each other.

The complexity usually comes on the run-up to the voting day, and especially in this election, afterwards, until the official result is announced. Prior to the election, there’ll be heavy campaignings to grab the sympathy of the voters, and in a lot of cases, vote-buying, whether through cash giving or freebies and promises of rewards. This generally works during the parliamentary elections where voters don’t particularly care which party they pick, and financial reward might make it worth their trouble to go to the polls.

However, with only two pairs of candidates to choose from and a potential of 190 million voters to win over, getting them excited enough to cast their vote requires a battle for their hearts and minds, and an appeal to their common imagination.

Indeed, what makes the presidential election this time unique is because it’s not so much a choice between two possible leaders, (in the past the choices had been between up to five pairs of candidates requiring two rounds of votings), but a war between two opposing camps where the winner takes all in one round of match, fought by the entire country.

A war for every inch of ground fought on every front available and imaginable, in a toss-up of a coin where each side displays a very different face and promises a different style of leadership. 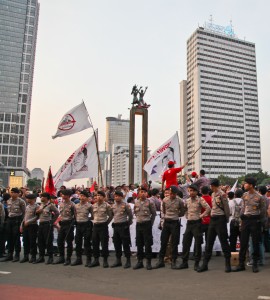 The most of obvious is the symbol that each presidential candidate represents. The difference cannot be more stark. On one side, there is Jokowi, the man of the people. Humble, unassuming, soft-spoken with a modest background and a furniture business, who was a mayor of Solo and the Governor of Jakarta.

He is the symbol of honesty, hard work, can-do fellow who is comfortable mingling and rubbing shoulders with the poor and the neglected. Something that the present corrupt-ridden government is not.

On the other side of the coin, is the former military general Prabowo, and former son-in-law of the New Order dictator, Soeharto. A war-like man born with a silver spoon in his mouth to a family with a good pedigree and a military career, and was notorious for his bravado and for doing things his own ways, including abusing human rights and disobeying orders.

His is a symbol of strength, decisiveness and control. Something that the current indecisive and pusillanimous government too, is not.

Equally polarized, are the aspirations that these two figures awaken in the breast of their supporters. Jokowi appeals to those who believe that to be great, Indonesia needs to change for the better, to create a more just and equal society and welfare for the poor, to work harder and transform themselves through a so-called ‘mental revolution’ that will enable them to be better, more skilled and able to compete with their neighbours.

The leadership that he offers is one of participation, collaboration, listening to the people and serving the people. After all, he comes from the people. He appeals to Indonesians who want to move the country forward to a greater democracy, more reforms and change. To those who look to the future with hope.

Prabowo, on the other hand, appeals to those who are tired of the mess and inefficiency that democracy brings. Of the burden of too many opinions, too many bosses, too much indecision and the headache of a plural society. He appeals to those who feel nostalgia for the rule and order of the New Order regime under Sohearto where everything is centralized and top down, but things could get done. He appeals to the young voters hungry for strong role models clever at giving speeches, inflaming them with pride and the strength to defeat their enemies. And to women who admire his good looks and his military uniform.

The leadership he offers is one of decisiveness, control, authority, from one who is confident that he is the man in charge, the hero and the saviour in the face of fear.

Both appeal to the Indonesian imagination. Both represent the crossroads and dilemma that Indonesia finds herself. Half of her looks to the future with hope. Half looks back to the glory of the past. A personality split in the middle.

This is reflected in the closeness of the race. In the bloody, muddy and dirty campaigns. In the hysteria of word-flingings played out in the social media, the partisan media, the smear campaigns, the songs, the videos, the commercials, not to mention the slanders, the lies, the fear-mongerings, the hatred, the arguments, the debates and the fights that occur on Twitter, Facebook, the Media, both official and bogus, within political parties, friends and families, in offices, in the warungs and cafes, and at dinner tables across the country.

All claiming to be the ones who love the country most. To represent the people’s wishes and aspirations most. The most Indonesian. The difference is in the slogans. Prabowo’s is Indonesia Bangkit – Rise Indonesia! While Jokowi’s is Indonesia Hebat – Great Indonesia. Together they form a common goal. Indonesia needs to rise in order to be great. But the roads mapped out, are very different.

Compared to the Parliamentary elections in April, voter turnout too was higher, over 70%, as supporters of both camps are eager to champion their chosen candidate. Surveys had shown that this was going to be a neck to neck race. Every single vote counted.

The tightness of the race and the amount of money, energy, ambition and vested interests poured into this race, makes losing a difficult option to swallow, particularly for Prabowo camp that has fought tooth and nail, using every means possible, to deflate Jokowi’s immense popularity from a double digit lead a few months ago, to a mere single digit.

A fight embodied in opposing TV channels whose affiliation shamelessly favours a particular candidate above balanced and fair reporting as well as journalistic credibility. 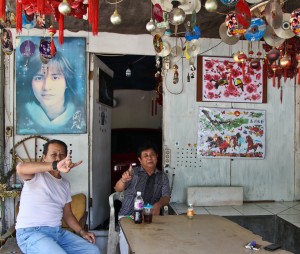 A fight whose closeness ultimately translates into an almost too close to call results produced through the Quick Counts, normally used to announce the winners of the election. This method of vote-counting, usually announced on the same day of the election, done by reputable pollsters, is crucial in determining election results long before the official Election Commission finishes the manual count.

Since Indonesia has practiced Quick Counts as far back as 2004, during Indonesia’s first direct elections, Quick Count results had been reliable with a margin of error of less than 1%, and thus an accepted part of Indonesia’s democracy.

For the first time, however, Quick Counts produced in this election revealed different results. Most of the credible pollsters produce similar results where Jokowi-JK team leads by a small margin of only around 5%.

However, this does not prevent other pollsters of dubious track records from producing Quick Count results showing that Prabowo leads by an equally slim margin. Giving him the benefit of the doubt and allowing him to make a similar claim.

Thus, at the moment we have two candidates convinced he’s the next President of Indonesia.

And we’re like high school students waiting for our finals exam results. A nerve-racking experience to be sure, but at least we’re learning an awful lot of lessons in a very short space of time.

Let’s just hope we pass this test with flying colours.

The Journey of Karin and Stef Establishing Amazing Lombok Resort