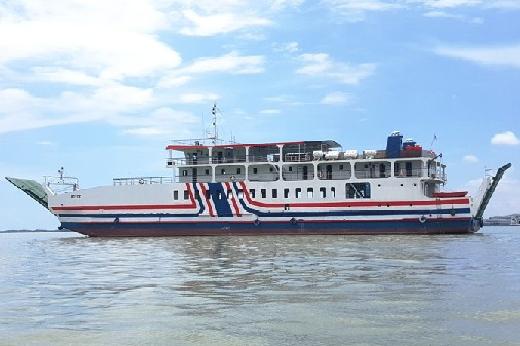 A passenger ferry has sunk in the waters of the Gilimanuk port area, Bali on Tuesday 29th June 2021 at 19:12 local time in Bali.

KMP Yunice is known to have departed from Ketapang Banyuwangi port, heading to Gilimanuk Harbor at around 17:12 WIB.

In video footage at the scene of the incident, KMP Yunice which tilted 90 degrees and was half submerged. A number of passengers were seen wearing orange life jackets.

The head of the Denpasar Search and Rescue Office, Gede Darmada, confirmed the incident.

“It is true that there has been a shipping accident; KMP Yunice was dragged by the current and drowned in the waters of the Gilimanuk port,” he said when contacted on Tuesday night.

He said the ship was a passenger ship working on the Ketapang-Gilimanuk crossing route. The length of the ship was 56.5 metres with a width of 8.6 metres.

“The Jembrana and Buleleng SAR Post Rescue Teams are moving towards the Gilimanuk Port LKP,” he said.

It is not yet known whether there were any fatalities in this incident. The inter-island ferry, in addition to carrying passengers, also usually carries motorised vehicles such as trucks, buses, cars, and motorbikes.