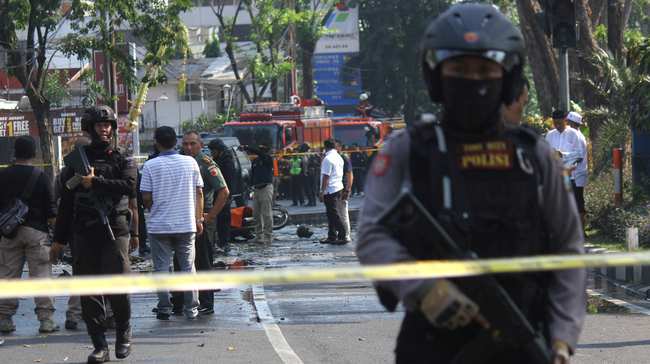 Indonesian police revealed yesterday that 96 people allegedly involved in terror activities have been captured or killed as part of a crackdown on terrorist networks in the country.

“Fourteen of (those 96 people) were gunned down by the police force for attempting to resist arrest,” Gen Tito said during a joint coordination meeting at National Police headquarters.

He said terrorist networks existed in most Indonesian provinces. Some of them were sleeper cells, but others were active.

In the latest arrests, counter-terrorism squad Densus 88 on Sunday captured three alleged terrorists in Pringsewu regency of Lampung, Sumatra. The suspects were identified only as US, 43, IN, 37, and IM, 42. They stand accused of being involved with the Jamaah Ansharut Daulah (JAD) terrorist group, which pledges allegiance to the Islamic State in Iraq and Syria.

Meanwhile, universities across Indonesia are tightening supervision of student activities following the arrest of suspected terrorists at a state university.

Densus 88 arrested three Riau University (Unri) alumni last Saturday over an alleged plan to launch an attack on the House of Representatives complex in Jakarta and the Riau Council building in Pekanbaru.

Research, Technology and Higher Education Minister Mohamad Nasir said recently the government had information about universities whose students were exposed to radical ideas on campus.

Unri rector Aras Mulyadi said the university would take several measures to prevent radicalism from spreading within the institution, with one such measure being the intensive monitoring and controlling of student activities.

The Ramadan Productivity Drop And How To Overcome It