A radical Islamic leader, notorious for his hate-fuelled rants against foreigners and minorities, has been released from jail early after serving only half of his sentence for beating two youths.

Habib Bahar bin Smith (34), who has distinctive long blondish-red hair, is the founder of a small extremist group called the Prophet’s Defender Council. The group, formed in 2007, has gained notoriety for attacking nightlife venues and minority religions, and its fondness for brandishing swords.

Smith’s penchant for violence extends to children. In July 2019, he was sentenced to three years in jail for assaulting two teenagers at his pesantren (Islamic boarding school) in Bogor, West Java, in December 2018. He was convicted of assault under Indonesia’s Criminal Code (KUHP) and violating child protection laws. Prosecutors had sought a six-year sentence for his attack on the two male youths, then aged 17 and 18. Video footage of the incident showed Smith grabbing one of the youths by the head and repeatedly kneeing his face, leaving him bruised and bleeding. The beating was a punishment to the boys because they had impersonated Smith.

Originally from the North Sulawesi capital of Manado, Smith is a staunch supporter of former general Prabowo Subianto’s failed presidential bids and is also close to Islamic Defenders Front leader Rizieq Shihab. He is fond of showing off in luxury cars and prancing about like a fashion model or a samurai warrior, rather than behaving like a traditional religious leader.

Smith in November 2018 referred to President Joko ‘Jokowi’ Widodo as a banci (transvestite) and a traitor to the nation, state and people. He also claimed that Jokowi would be seen menstruating if his pants were removed. Netizens noted the irony of a man with long dyed hair calling someone else a transvestite. When accused of hate speech and insulting the president, Smith was represented by lawyer Yusril Ihza Mahendra, who urged Jokowi not to take legal action against an “ordinary person”. 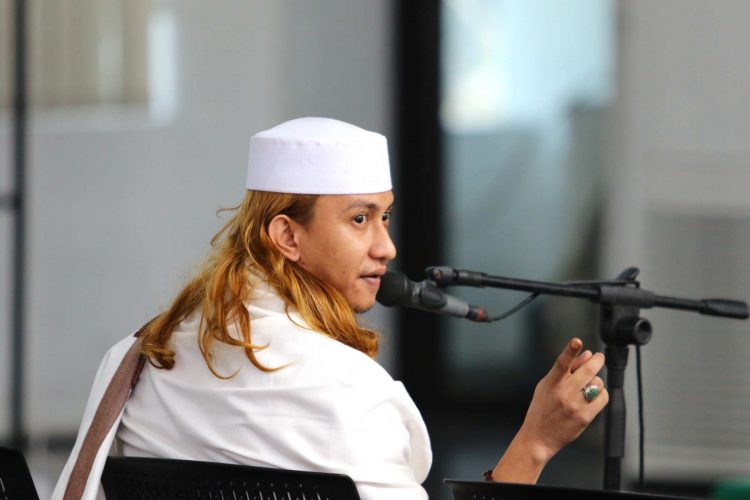 Smith claims to have holy blood as a direct descendant of the Prophet Muhammad. He came to prominence during the organized protests against then-Jakarta governor Basuki “Ahok” Tjahaja Purnama, when radical Islamic groups were mobilized by Ahok’s powerful political foes. Smith has falsely accused the ruling Indonesian Democratic Party of Struggle (PDIP) of being a nest of the long-banned Indonesian Communist Party (PKI). He has also accused ethnic Chinese, Westerners and other infidels of profiting at the expense of starving and enslaved Indonesians.

When Instagram – an app that provides an altar of self-worship for children and halfwit narcissists – deleted his account in 2018, Smith was not pleased. He staged a protest with FPI members at the social media company’s Jakarta office, resulting in Instagram representative Kartika Puspitasari issuing an apology. Smith’s legal representative Habib Novel claimed Instagram’s deletion of the account had interfered with the “integrity of the nation” and disadvantaged tens of millions of Indonesians.

Upon his release from Pondok Rajeg Penitentiary in Cibinong, Bogor, on Saturday (May 16), Smith was wearing a military-style red beret, complete with five stars, as if playing soldier dress-ups. He did not wear a face mask, despite the ongoing coronavirus pandemic. Standing astride an open-topped vehicle as he returned to his pesantren, he was greeted by scores of his cheering students and supporters, most of whom were not wearing masks or practicing social distancing. Smith gave special thanks to prayers from FPI leader Rizieq Shihab. He also thanked Allah and “all Muslims in Indonesia and outside Indonesia”. He promised to resume his “fight for the way Allah”.

The Justice and Human Rights Ministry on April 2 issued a decree allowing jail inmates serving time for “petty crimes” to be released if they had already served two-thirds of their sentence. The policy aims to minimize coronavirus infections in the country’s overcrowded jails. But Smith had not completed two-thirds of his sentence. Instead, he was granted an “assimilation program parole” from the ministry, allowing him to continue serving his sentence at his pesantren – and by November 12, 2020, he will have served two-thirds of the sentence and qualify for full release.

Smith was sent back to prison early on May 19 for violating the terms of his parole.